Rudy's Suspension: Why NYS Court's Decision is Part of Dems' Political Strategy to Stay in Power 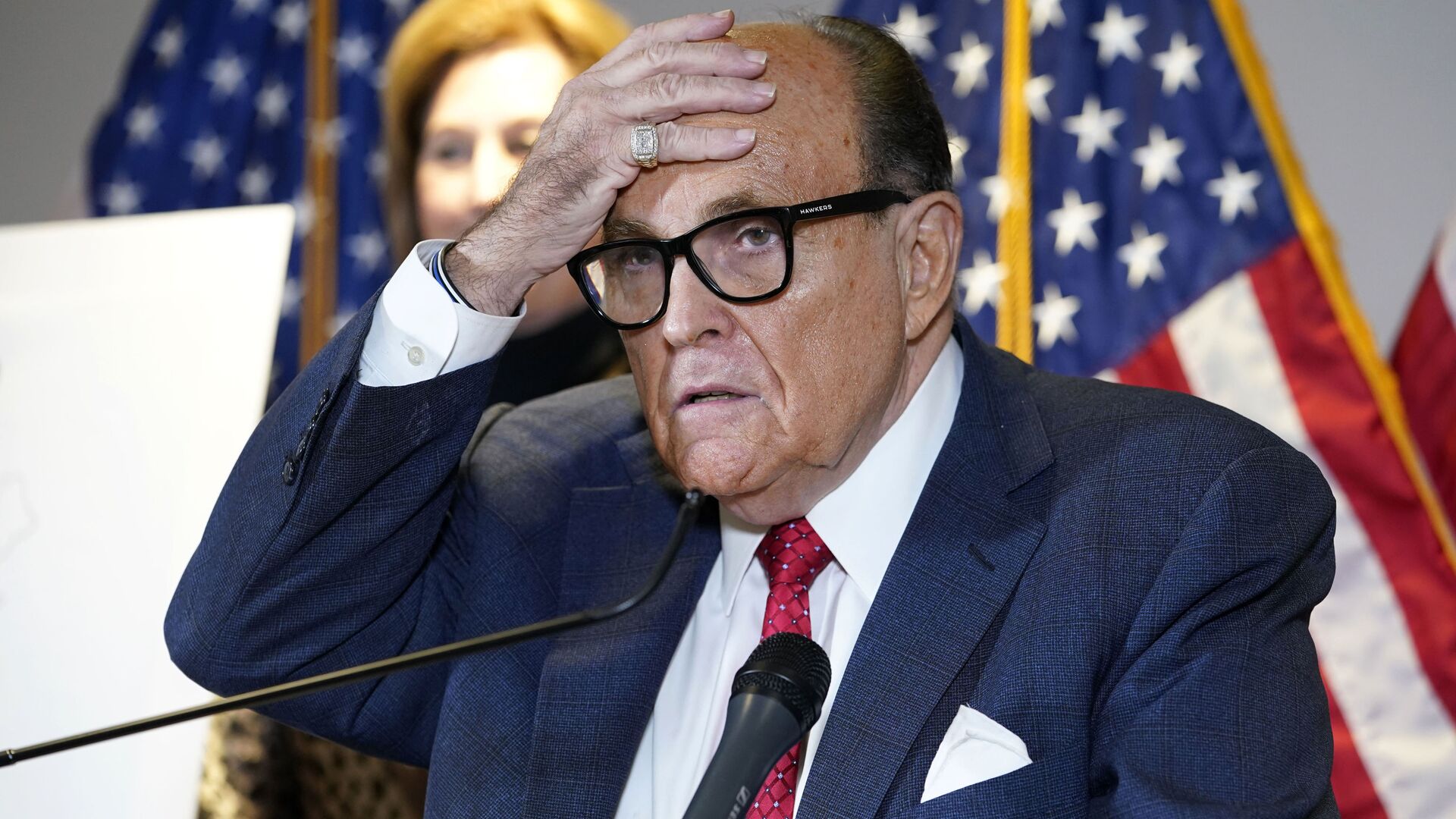 Ekaterina Blinova
All materialsWrite to the author
Rudy Giuliani, the former New York City mayor and personal lawyer to ex-President Donald Trump, was suspended from practicing law in New York State on Thursday by an appellate court that found he made "demonstrably false and misleading statements to courts, lawmakers and the public" about the 2020 presidential election.

According to the court, Giuliani's assumption that victory in the 2020 race was stolen from Trump due to widespread voter fraud, particularly in Pennsylvania, Arizona, Georgia, and Michigan, were in violation of various provisions of the New York Rules of Professional Conduct. In addition to this, the Attorney Grievance Committee, "contends that respondent’s misconduct directly inflamed tensions that bubbled over into the events of January 6, 2021 in this nation’s Capitol," the court's document reads.

"I find this development very baffling, indeed," says Stephen B. Presser, a leading American legal historian and an emeritus professor at Northwestern University. "Rudy Guiliani had a reputation as one of the most brilliant, fearless, and honest prosecutors when he was the US Attorney for the Southern District of New York, and he was clearly one of the greatest mayors New York ever had."

To pull Giuliani's license to practice law on the theory that the former NYC mayor should be deprived of his livelihood because he made allegedly false claims about the election strikes Presser as one of the gravest travesties of justice he has ever witnessed.

"I have not had a chance to read all the documents involved, but I have seen enough to understand that it is simply wrong to claim, as apparently the New York authorities have done, that no one should question the results of the last presidential election," the legal historian highlights. "We have not seen definitive evaluations of the results in Arizona, Michigan, Pennsylvania, Georgia and other states where suspicious activities took place, and it blinks at reality to say that there was no evidence of irregularity."

The professor added that he would not be very surprised if Rudy succeeds in overturning the court's "poorly reasoned, vindictive, capricious, and exceptionally arbitrary" decision.

One must wait to see what happens when the suspension is appealed, echoes Timothy Hagle, a political science professor at the University of Iowa.

"The suspension of Rudy Giuliani's law license is, at this point, a temporary one," the professor says. "Giuliani currently claims that the suspension was inappropriate and premature, given that there has not been a full hearing on the matter."

The question is why Giuliani is being targeted for his statements: "Is the suspension of Giuliani's license purely political or does his case differ substantially from many other situations?" Hagle asks. 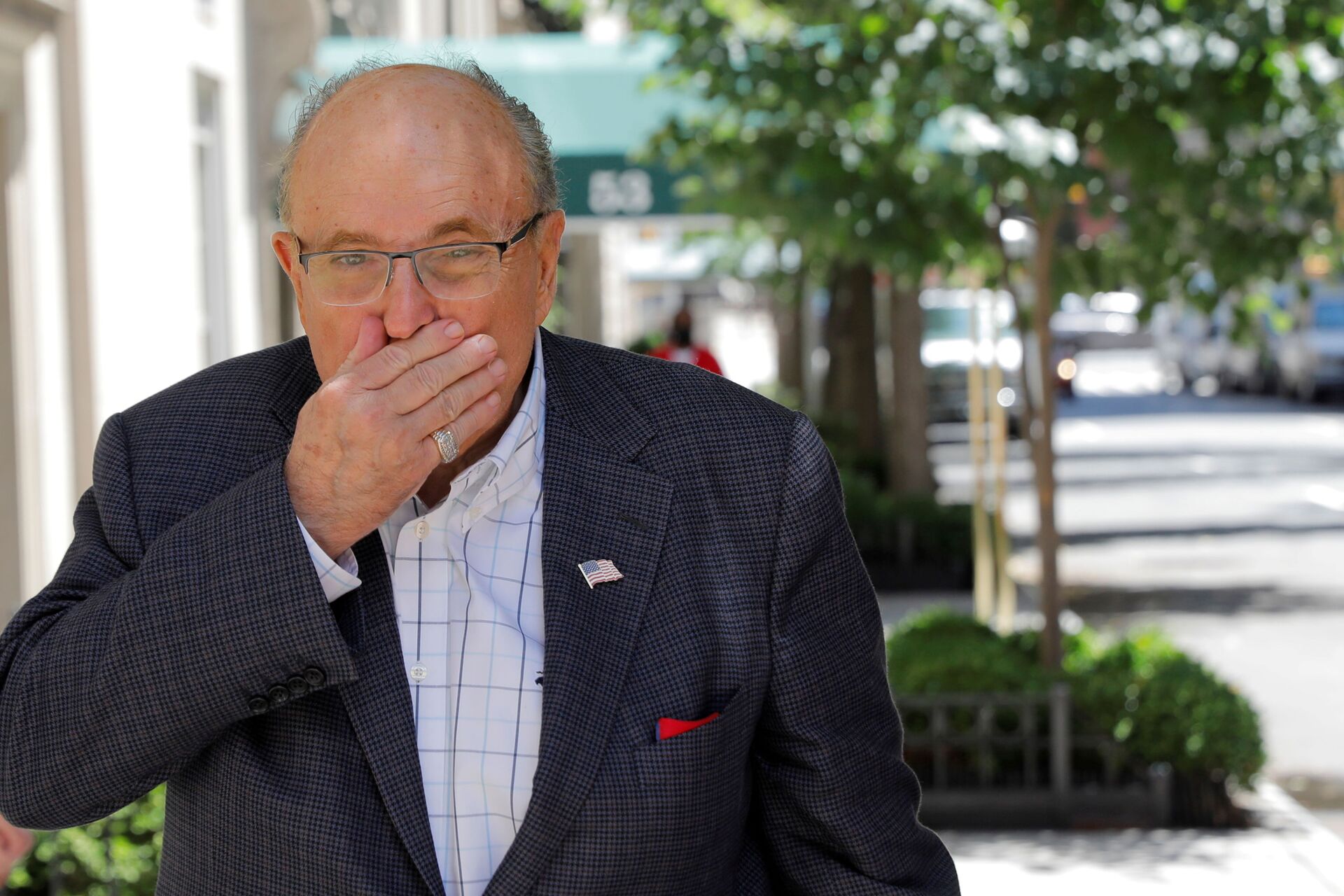 How Many Dems Have Been Disciplined for False Statements?

The suspension of Giuliani's law license is illegitimate and wrong but some of his claims about the 2020 election were indeed false, suggests Dr. Nicholas Waddy, associate professor of history at SUNY Alfred and a conservative speaker. Still, this is not something unprecedented given that prominent Democratic politicians on multiple occasions promoted false narratives about the 2016 election, with the intention of casting doubt on the legitimacy of Donald Trump's victory, according to the professor. However, there is more to this problem than meets the eye, Waddy notes.

The last question is how many Democratic lawyers and politicians have faced discipline for these infractions, which similarly "damage the proper functioning of a free society," wonders the academic. The answer is "none," he underscores. 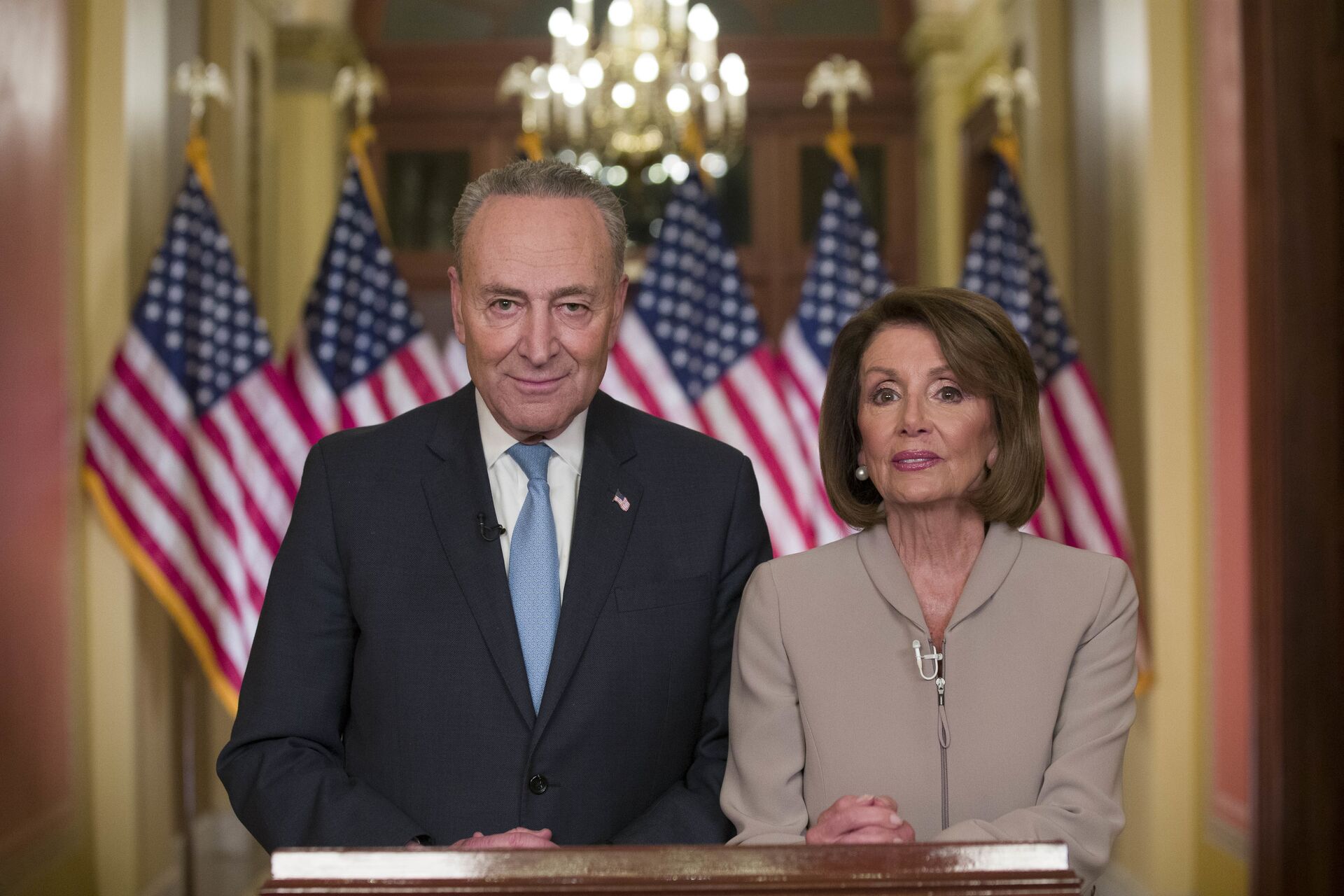 "The actions Democrats have taken against Rudy Giuliani are nothing more than political retribution," believes Republican strategist Brandon Scholz.

Now that the Democrats are in charge, having a majority in the US Congress and getting the White House, "they are going to do everything they can to go after former President Trump and his allies," the strategist predicts.

"It is an important element of their political strategy to continue to attack Trump in every aspect to keep their voting base intact and to keep undecided voters primed for the 2022 elections," Scholz remarks.

Not only Rudy has been subjected to attack, Manhattan District Attorney Cyrus R. Vance Jr. is currently pushing ahead with a criminal probe of former President Donald Trump and his company, the Trump Organisation.

The Dems have a "good reason" to continue smearing Trump and his supporters since the former president "will be a factor in some of the US Senate, Congressional and Gubernatorial races across the United States" to attract undecided voters to the GOP's fold, according to the strategist.

In addition to that, it appears that the Democratic Party may face a series of defeats in the forthcoming 2022 midterms. According to some estimates, the Republican Party is set to gain up to eight seats in the House of Representatives due to decennial redistricting. This could be enough for the GOP to retake control in the lower chamber, The Cook Political Report noted on 26 April. Similarly gloomy prognoses were voiced by the Atlantic and Intelligencer, which referred to the puzzling historic trend of the president's party suffering a net loss of House seats in the midterms.

The Democratic Party has opted for "an ugly political strategy" to stay in power, according to Scholz.

"It flies in the face of what Democrat President Joe Biden is saying about trying to work together in a bipartisan fashion," he says. "Suffice it to say, dirty politics can come back to haunt the aggressor." 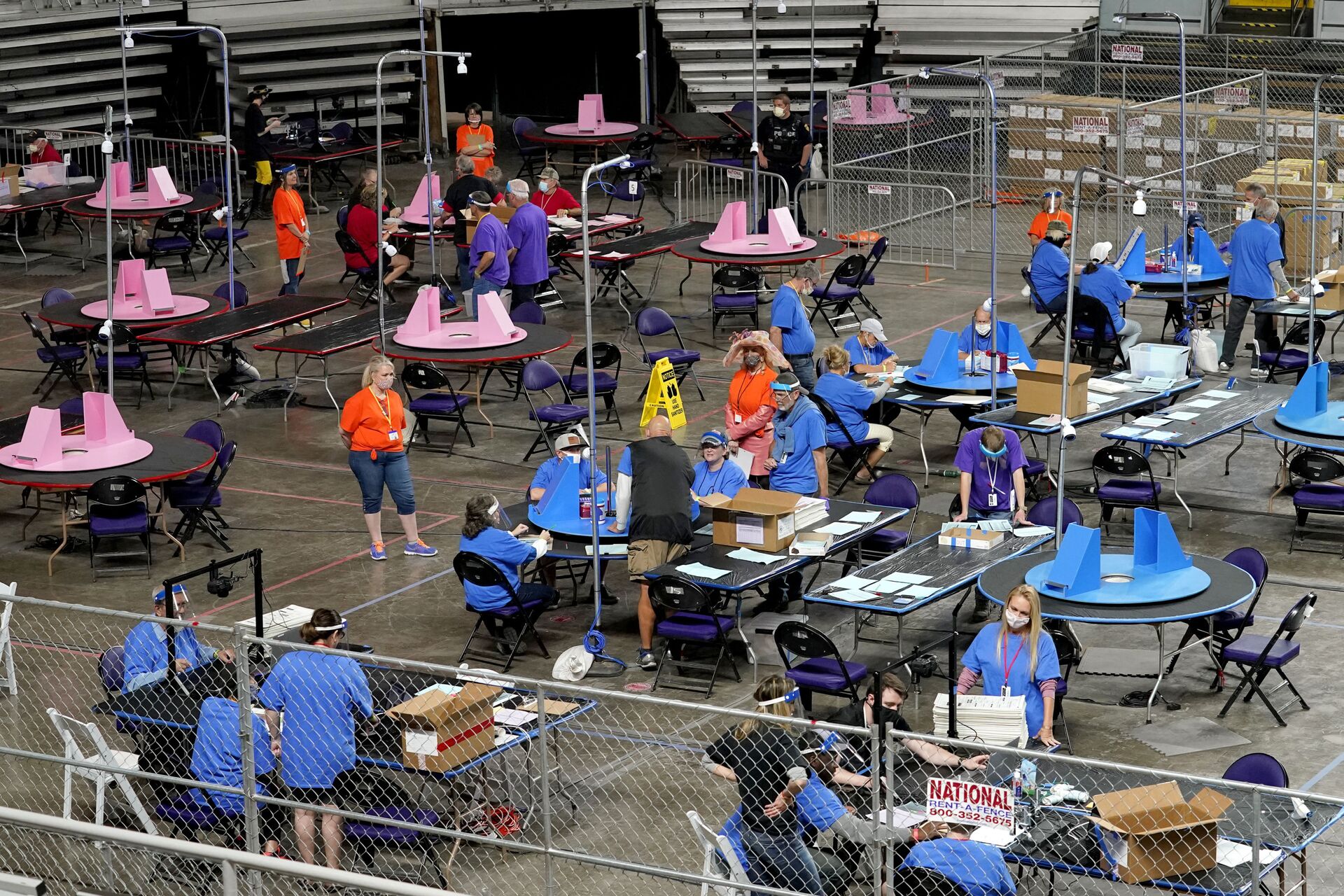 FILE - In this May 6, 2021 file photo, Maricopa County ballots cast in the 2020 general election are examined and recounted by contractors working for Florida-based company, Cyber Ninjas at Veterans Memorial Coliseum in Phoenix. For some conspiracy theorists, the 2020 election still hasn’t ended. Trump supporters are pushing to re-examine ballots from November across the country, and finding success in swing states like Arizona and Georgia. Their efforts and sometimes misleading conclusions are being gleefully amplified by the former president.
© AP Photo / Matt York

The court's decision to strip Giuliani of his law license came amid the GOP's growing push to audit the 2020 election results in key battleground states. In April, the Arizona state Senate kicked off the recount of 2.1 million ballots from Maricopa County and an examination of election equipment.

Meanwhile, in Georgia, Secretary of State Brad Raffensperger admitted that election irregularities occurred in Fulton County, Atlanta and on 14 June announced that 100,000 people would be removed from voter rolls across the state. The audit of tens of thousands of mail-in ballots is currently going on in Fulton County. For its part, Pennsylvania GOP lawmakers are considering an Arizona-style audit and sending subpoenas for election materials.

​At the same time, the Michigan Senate Oversight Committee issued a 55-page report earlier this week concluding that there had been no "systematic fraud" in the 2020 election in the state.

The effort appears to be quite popular with the public. A new national telephone and online survey by Rasmussen Reports indicated that 55 percent of likely American voters support forensic audits of election results to ensure that there was no voter fraud. Only 29 percent oppose such measures.

Former President Trump has repeatedly hailed the GOP initiative to conduct 2020 election audits across the country. Speaking to Just the News on 22 June, the former president called upon his supporters to keep an eye on the ongoing election audits, stressing that he never admitted defeat and never conceded.

"If the election was fraudulent, people are gonna have to make up their own minds. It’s not going to be up to me. It’s going to be up to the public. It’s gonna be up to, perhaps, politicians," former President Trump said. “I don’t think there’s ever been a case like this where hundreds of thousands of votes will be found. So we’ll have to see what happens."