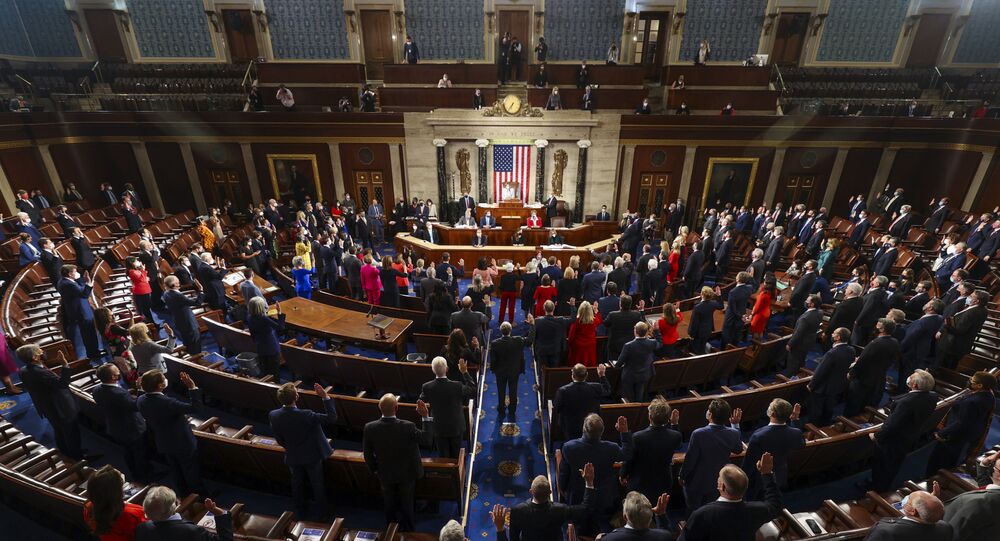 Is Pelosi Ready to Raise the White Flag? Why Dems are Likely to Surrender the House to GOP in 2023

The Republican Party is set to get up to eight seats in the House of Representatives due to decennial redistricting. This would potentially be enough to tip the balance in the GOP's favour, given that it currently needs to pick up just five seats to win back the lower chamber.

Under the US Constitution the 435 seats in the House are divided among 50 states based on population. Every ten years, following the census, states are required to redraw district lines.

According to the Census Bureau's official 2020 state population counts, Texas may get two more seats next year. Colorado, Florida, Montana, North Carolina and Oregon will each pick up one seat, while California, Illinois, Michigan, New York, Ohio, Pennsylvania and West Virginia are going to lose one seat each.

​The gains for traditionally red states could help flip some seats in the House due to population shifts alone, observers say. But that is not all: the GOP is expected to instrumentalise gerrymandering, a practice of redrawing district maps to benefit one party over the other.

In general, GOP state governments have the final authority to draw congressional lines in 187 districts, while the Dems have such authority over just 75. All in all, the Republican Party is poised to gain "between zero and eight House seats via map changes" which is potentially enough to regain control over the lower chamber, according to The Cook Political Report.

Is the US Census "Rigged"?

Still, some conservatives are not satisfied with the census findings: Stephen Moore, an American economics journalist, author, and columnist, argues in his op-ed for The Epoch Times that Biden's Census Bureau "added" 2.5 million more residents to the blue-state population count.

​Moore recalls that the December 2020 projections for Census reapportionment had the ‘blue states’ losing more seats, while Texas, Florida and Arizona, traditionally ‘red states’, were projected to get three, two and one seat, respectively. According to the columnist, New York has lost about 1.3 million residents on net to other states over the last decade and was poised to be deprived of two seats. However, now it is going to lose just one seat.

New York is not the only "deep-blue state" that had its 2020 Census numbers significantly revised upward from their December estimates, Moore insists, referring to Connecticut, Hawaii, Illinois, Massachusetts, New Jersey, New York, Rhode Island, and Vermont.

Why does this matter? Remember: a switch in three or four seats in 2022 elections could flip the House and take the gavel away from current Speaker Nancy Pelosi and the Democrats. Also, many federal grant distributions to states are based on their population.

​Although the disparity does deserve examination, there’s no evidence the Biden administration rigged reapportionment, The Wall Street Journal's editorial believes. The media outlet recalls that last year, similar accusations of census "sabotage" were levelled against President Trump. For its part, the Census Bureau asserted that the White House had not interfered with the 2020 census.

The upcoming redistricting is not the only concern for the House Democrats. As a rule of thumb, voters usually "punish" the president’s party in the next midterm election, notes The Atlantic.

In 1988, the Journal of Politics examined election results since 1902 and outlined a puzzling trend: the president's party almost always suffered a net loss of House seats in the midterms. The Atlantic says that the trend still persists, citing the Democratic Party's resounding midterm defeats under Bill Clinton (1993-94) and Barack Obama (2009-10).

To be clear: Joe Biden is a one term President and Democrats will more than likely lose control of the House in 2022...everyone understands this.

So, he (and his handlers) are trying to ram through his legacy in his first 2 years.

The outlandish proposals have only just begun.

​There had been just two exceptions in the last three decades, but in both cases the presidents' approval ratings exceeded 60 percent, writes The Intelligencer blog of New York Magazine. However, this is not Joe Biden's case, as his favourability remains below that threshold, admits the media outlet. According to FiveThirtyEight’s polling average, the president's job approval rating stands at 54 percent, while 41 percent of Americans show disapproval.

66% of {congressional aides} say Republicans will win control of the House in 2022. More than one-third of Democrats -- 36%. 66% of respondents overall say Democrats will control the Senate in 2023<<From The Canvas’ anonymous survey.

​Theoretically, Joe Biden could have improved his performance in polls if he goes "big," believes The Atlantic, citing the president's ambitious reforms. Still, most of Biden's proposals have recently got stuck in the US Congress. On 3 May, Senate Minority Leader Mitch McConnell made it clear that no Republican senator would vote for the president's landmark $4.1 trillion infrastructure initiative.

Seems pretty clear that given their thin margins, Democrats are going to lose the House absent a miracle. https://t.co/tn5ayGMgbW

​The Democrats also pinned hopes on The For the People's Act, H.R. 1, which, among other election reforms, would outlaw the political gerrymandering, thus undermining the GOP's redistricting advantage. The voting rights legislation was passed in the House along partisan lines but stalled in the Senate. The Dems need each and every Democratic vote in the evenly split upper chamber to proceed with their initiatives. However, Joe Manchin, a moderate Democratic senator, strongly opposes both the partisan voting rights bill and the idea of eliminating filibuster. Under Senate rules, a filibuster can only be stopped if 60 senators vote for the bill.

"The Democratic Party will either use its tenuous grip on power to democratise House representation, or it will (almost certainly) surrender the chamber in 2023," the Intelligencer writes. "Barring an epiphany on the other side of the Capitol, Nancy Pelosi should get ready to raise the white flag."