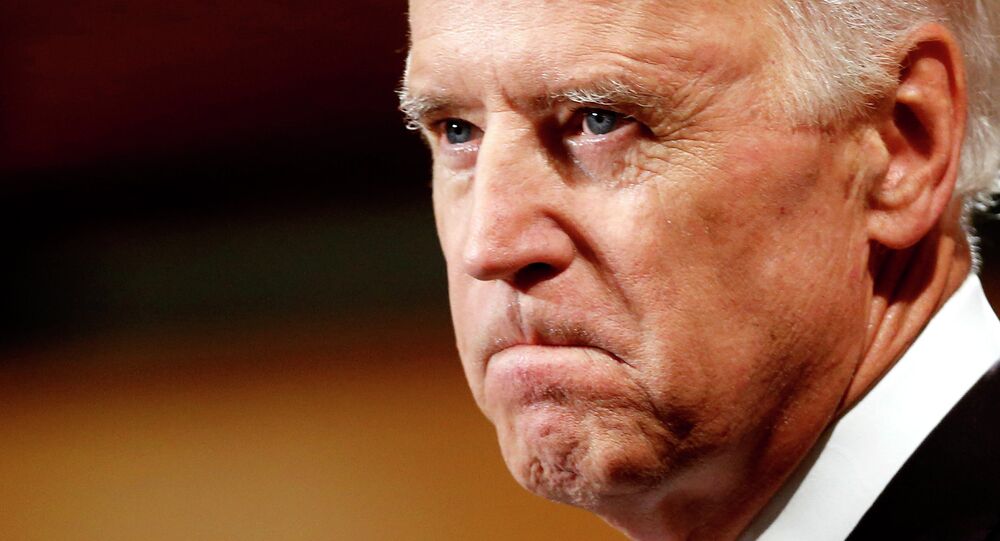 Will Biden Strike a Chord With Manchin or Say Bye-Bye to His $2 Trillion Plan, at Least for Now?

Democratic Senator Joe Manchin has once again come under the spotlight as he throws the prospects of the passage of Joe Biden's ambitious infrastructure proposal into doubt. How will the president solve the Manchin problem?

President Joe Biden is due to hold a meeting with bipartisan members of the House and Senate on Monday to discuss his $2 trillion infrastructure plan, part of a broader "build back better" initiative.

The President is seeking to inject money into roads, bridges, airports, broadband, electric vehicles, housing and job training, while increasing the corporate tax rate to 28% to fund his bold project. Biden is open to dialogue with the US lawmakers and could alter some aspects of his proposal, Secretary of Energy Jennifer Granholm told Sunday on ABC's "This Week".

However, Biden made it clear last week that he could pass legislation with only Democratic votes through a special budget process called "reconciliation" if Republicans are non-cooperative. The mechanism was particularly instrumentalised when the President put forward his $1.9 trillion COVID relief bill.

To pass the new bill through the reconciliation process, Biden would need all 50 Democratic votes plus one tie breaking vote cast by Vice President Kamala Harris.  Democratic Senator Joe Manchin signalled in his 7 April op-ed for the Washington Post that he does not really like the idea.

The senator wrote that he is "alarmed at how the budget reconciliation process is being used by both parties to stifle debate," arguing that reconciliation should not replace "regular order" in the Senate. According to Manchin, "the time has come to end these political games… and to usher in a new era of bipartisanship where we find common ground on the major policy debates facing our nation."

Democrats' zeal for quick action, GOP mods' frustration with Biden and Manchin's desire for a "new era of bipartisanship" are all set to collide on Capitol Hill this month. The Biden agenda hangs in the balance.
W/ @seungminkimhttps://t.co/fLd8GOXFk3

​He also emphasised that "there is no circumstance in which I would vote to eliminate or weaken the filibuster" which means that if reconciliation is completely ruled out the Democrats will have to win the hearts and minds of at least 10 GOP senators to push ahead with their infrastructure plan.

"President Joe Biden has a Sen. Joe Manchin problem," writes Julian Zelizer, a CNN political analyst. "If Manchin follows through on his threats, he could easily short-circuit the policy accomplishments that would define the Biden presidency."

Still, the answer is not to try to appease Manchin or "make decisions based on illusory goals of bipartisanship with a Republican Party," insists Zelizer, offering to "exert pressure back on Manchin - either with the threat of a primary challenge or incessant grassroots opposition - to prompt him to think differently about what the 'safest' political path might be."

​The CNN analyst does not believe that the Dems could succeed in persuading the GOP to endorse their plan, and with good reason. Not that the Republican Party is against refurbishing the US infrastructure: they fully support fixing American roads, bridges and airports. The problem is that Biden's proposal is awash with unrelated items, according to the GOP.

"This plan is not about rebuilding America’s backbone. Less than 6 percent of this massive proposal goes to roads and bridges. It would spend more money just on electric cars than on America’s roads, bridges, ports, airports, and waterways combined,” Senate Minority Leader Mitch McConnell (R-Ky.) told reporters last week.

To make matters worse, the Dems want to pay for this package by considerably increasing taxes on businesses on the heels of the nationwide COVID lockdowns, the Republicans say.

His proposal calls for more money to be spent on electric vehicles than on America’s roads, bridges, ports, airports, and waterways combined.

​"This package that they’ve laid out at the beginning, styled infrastructure is a Trojan horse for massive tax increases and a whole lot of more debt," warned McConnell.

While Biden is planning to hike corporate taxes from 21 percent to 28 percent, the crux of the matter is that the US federal-state combined tax rate could actually amount to 32.34 percent, according to the Tax Foundation. The think tank estimates that "raising the federal corporate tax rate to 28 percent would reduce long-run economic output by 0.8 percent, eliminate 159,000 jobs, and reduce wages by 0.7 percent."

Under these circumstances the GOP could hardly give a nod to the plan. At the same time, "the idea that Biden should include Republican Minority Leader Mitch McConnell in legislative negotiations and that Democrats should substantially redesign bills around GOP demands is simply foolhardy," claims Julian Zelizer.

Assuming that both sides may not reach a compromise in the near term, Manchin's position turns out to be pivotal: he could put the brakes on the president's bold infrastructural plan for weeks or even months, according to Reuters.

Meanwhile, the clock is ticking for the Democratic Party's initiatives: one cannot rule out that the 2022 midterms could reshuffle the composition of the House and the Senate in the GOP's favour, spelling the end to the president's progressive agenda.