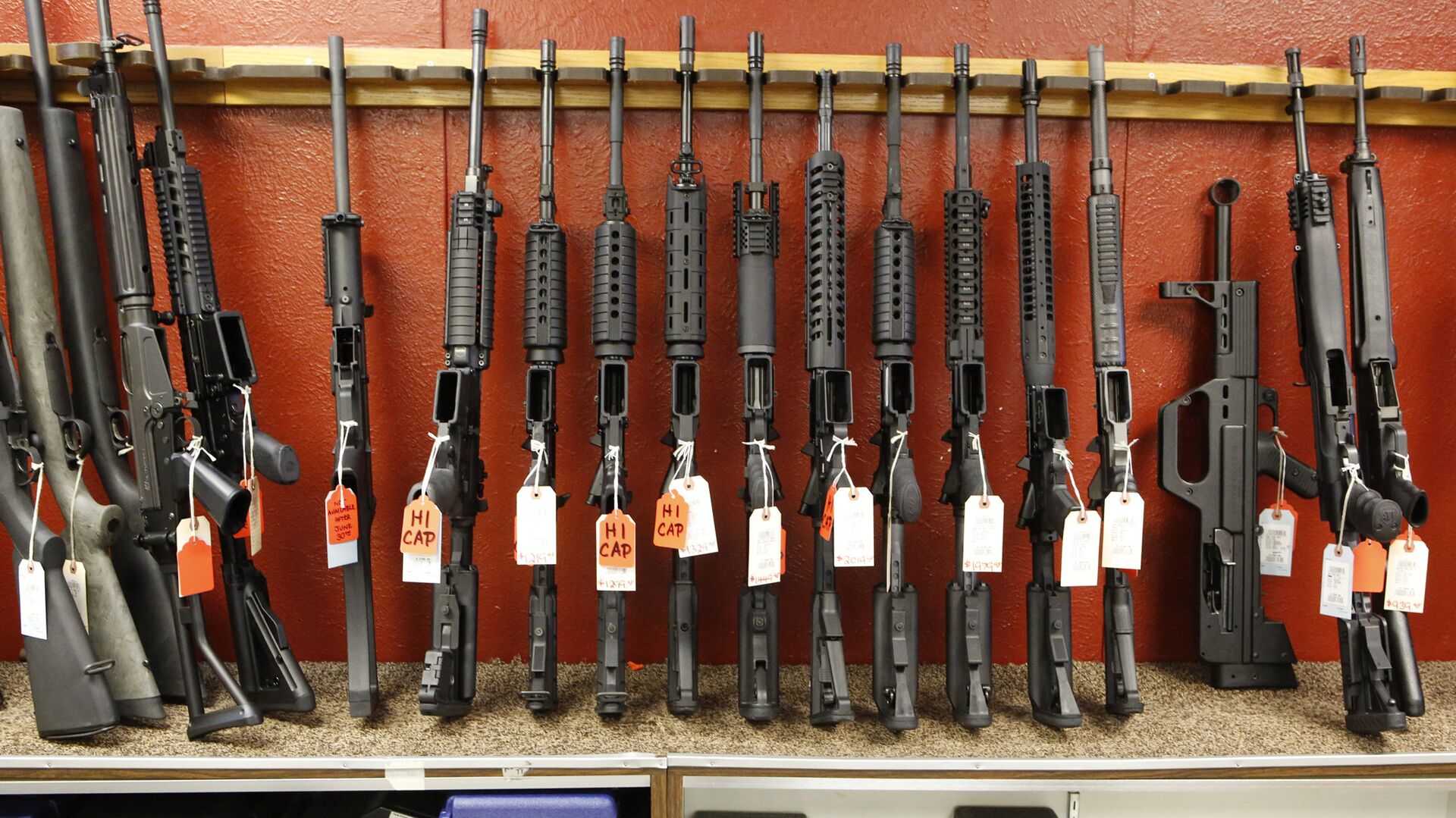 Ekaterina Blinova
All materialsWrite to the author
Gun control remains "a priority on a personal level" for President Joe Biden, White House press secretary Jen Psaki told reporters earlier this week. The NRA and American conservatives are concerned about Biden's push as Democrats are now in control of the White House and both chambers of the US Congress.

On 14 February, Joe Biden called for strengthening gun laws on the third anniversary of the mass shooting at Marjory Stoneman Douglas High School in Parkland, Florida.

"I am calling on Congress to enact common sense gun law reforms, including requiring background checks on all gun sales, banning assault weapons and high-capacity magazines, and eliminating immunity for gun manufacturers who knowingly put weapons of war on our streets", he said in an official statement last Sunday.

The National Rifle Association (NRA), an influential US gun rights advocacy group, criticised Joe Biden's call for stricter gun laws on Twitter pledging to "never stop fighting for the Second Amendment''. Speaking to The Wall Street Journal an NRA representative expressed concern that Biden "may become the most anti-gun president in American history".

A year ago, Biden vowed that on day one of his presidency he would send a bill envisaging toughened gun laws to Congress. However, the legislation has yet to find its way to the House floor making gun control activists nervous, Politico's Playbook PM remarked on Tuesday.

This is not about the NRA. This is about the people’s constitutionally guaranteed right to bear arms. Period. @POTUS, you will be met with stiff resistance if you go down this road. Alaskans will not stand for it. https://t.co/dQgtuFBUl3#akgov

​The president's statement appears particularly troubling as it comes amid an all-out crackdown on American conservatives, says Pamela Geller, an American political activist, blogger, and editor-in-chief of the Geller Report.

"This is happening while Biden and his henchmen are smearing their legitimate political opponents - supporters of President Trump - as 'extremists' and 'terrorists'", she emphasises. "He is trying to use the fantasy of violent opposition to his regime in order to justify the trashing of the Second Amendment".

If Democrat lawmakers thought for a minute that their security would have to follow their insane gun laws they'd be even more in favor of protecting the Second Amendment than I am - if that's even possible.

​In the wake of the Capitol Hill siege carried out by "Trump supporters", the Democratic Party has put forward the Domestic Terrorism Prevention Act (DTPA) which specifically focuses on "white extremism". On Monday, Eric Swalwell called for the creation of "a white nationalism task force" at the Department of Justice. For its part, the left-leaning press has stepped up attacks against Trump supporters calling them "insurrectionists" and "terrorists" following the DC incident.

"The establishment media will do all it can to whitewash and sell these measures, but after months of Antifa and Black Lives Matter rioting, the administration will be doing this against the will of the American people", says Geller.

Increased gun laws will only be obeyed by one demographic... Law abiding citizens. It's scary how hard that logic is for some to follow.

​The coronavirus pandemic and Black Lives Matter riots have affected the public's perception of the gun ownership issue. A Gallup poll from November 2020 found that support for stricter gun laws had reached its lowest level since 2016. Fifty-seven percent of Americans called for stricter laws covering the sale of firearms in 2020, while following the 2018 school massacre in Parkland, Florida, 67 percent of American respondents advocated tougher gun controls.

Furthermore, as the pandemic started engulfing the US in March 2020, gun and ammo stores reported an unprecedented increase in sales. Among those hoarding arms were many first time buyers, according to weapons shop owners.

The Democrats have been seeking to tighten the screws on gun ownership at the federal level for quite a while. During the 2019 election cycle Democratic presidential candidate Bernie Sanders urged the nation to follow New Zealand's lead, "take on the NRA and ban the sale and distribution of assault weapons in the United States". His competitor, California Representative Eric Swalwell, suggested imprisoning those who would not agree to sell back their military-style weapons.

​The irony of the situation is that California, which boasts the strictest gun control in the country, accounts for almost 17 percent of mass public shootings since 2000, while Texas saw only 6.6 percent of the total mass shootings in the same period of time, according to the Heritage Foundation. 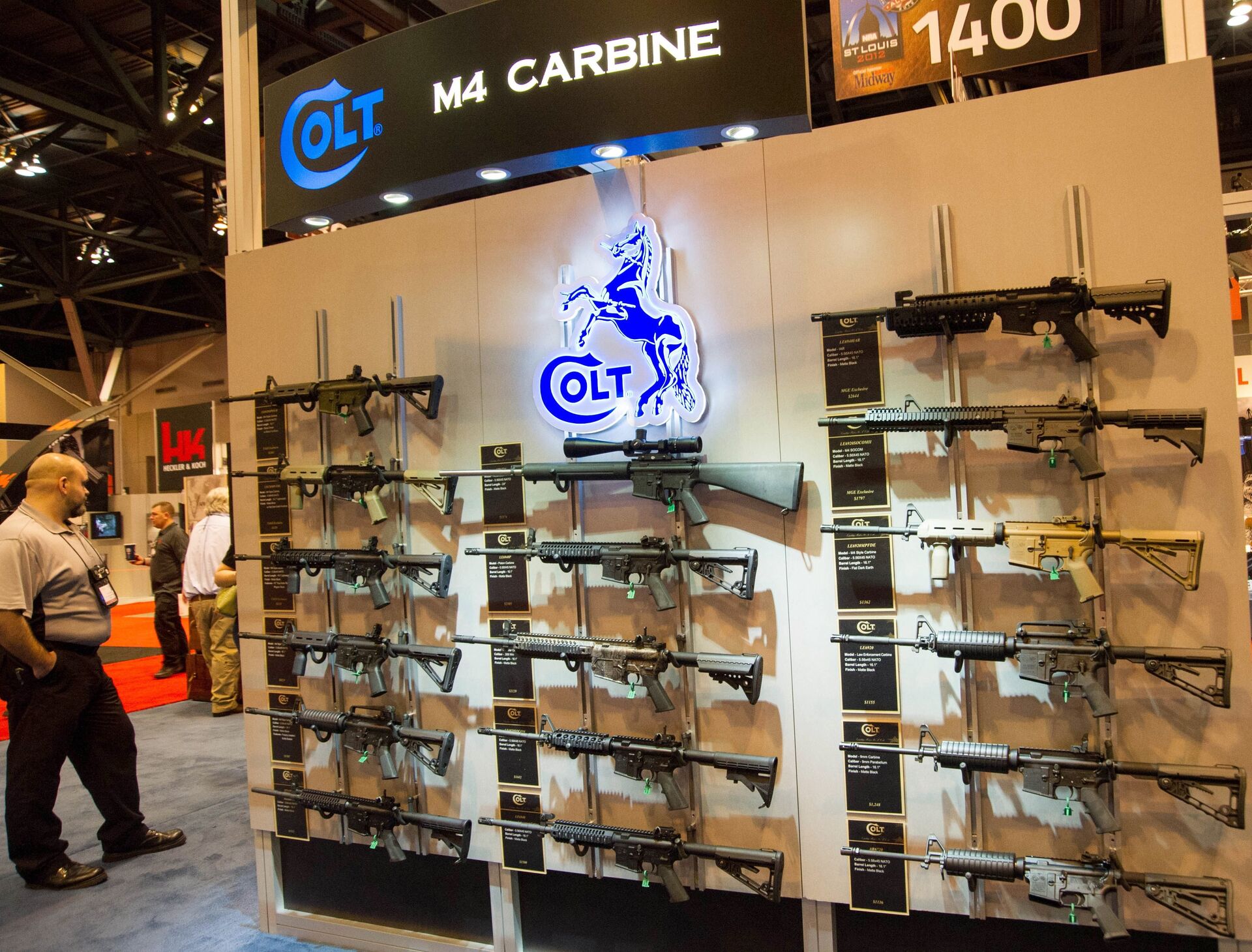 A wall of Colt M4 Carbines in various configurations are displayed at the National Rifle Association (NRA) Annual Meetings and Exhibits on April 14, 2012 in St. Louis, Missouri
© AFP 2022 / Karen BLEIER

Will the GOP Upset Biden's Plan?

Given that the Democrats have a majority in both chambers of the US Congress their push for stricter gun laws will bring about tangible results unless the GOP withstands the initiative. Geller, however, doubts that Republican lawmakers are ready to fight tooth and nail for the Second Amendment.

"The GOP can and will do nothing", she remarks. "It is spineless, weak, cowardly, and compromised. We need a new opposition party in this country".

Meanwhile, some US states are considering measures to shield themselves from new federal laws cracking down on firearms. In early February, the lower chamber of the Missouri General Assembly passed House Bill 85 or the "Second Amendment Preservation Act" would allow state gun laws to supersede federal regulations.

For all those foolish NRA-haters, pay attention.

In less than one week, both Utah and Montana passed Constitutional Carry – ending government permission to carry firearms. Both pieces of legislation were NRA-backed.

For his part, Montana Gov. Greg Gianforte has recently signed into law HB 102 which allows people to carry concealed firearms without a permit in most locations. A permit will be mandatory for carrying arms in state and local government buildings such as the State Capitol Building.

"Every law-abiding Montanan should be able to defend themselves and their loved ones. That's why today, I signed HB 102 into law", tweeted Gianforte.