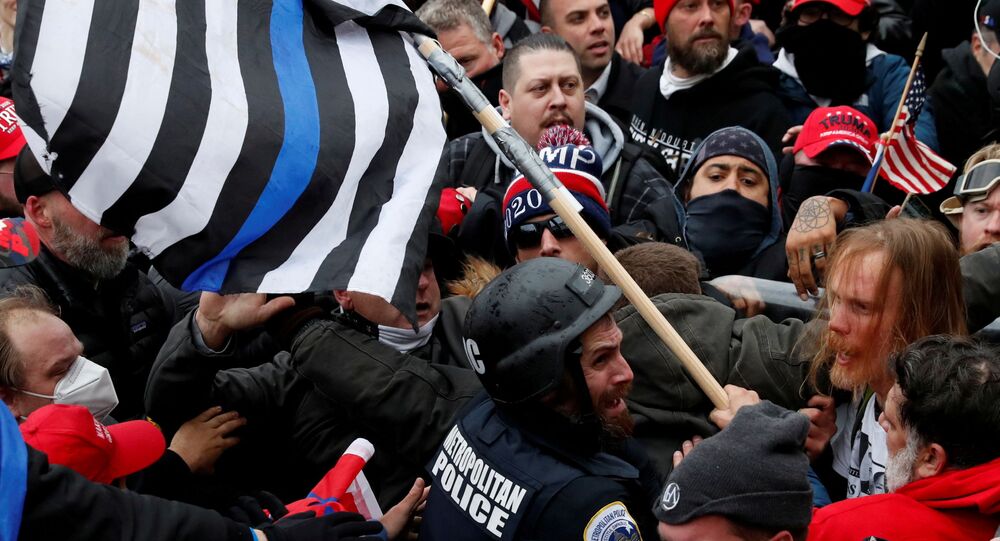 While the US media does not make a distinction between peaceful protesters who took part in the 6 January Trump rally in DC and the group of 200 or so rioters who broke into the Capitol building, it would be wrong to treat them all the same way, eyewitnesses insist.

Over 170 criminal cases have been opened so far in the wake of the Capitol Hill protests which left five people dead, according to Michael Sherwin, acting US attorney for the District of Columbia. In addition to that, the FBI is investigating the planting of pipe bombs outside the headquarters of the Democratic National Committee and Republican National Committee, as NBC News reported on 13 January.

On 6 January, a group of demonstrators broke into the Capitol building amid the joint congressional session to count electoral votes. The incident occurred hours after a rally held by President Donald Trump outside the White House.

Rioters Constituted a 'Tiny Number' Compared to the Crowd

The crowd that gathered on 6 January in Washington DC did not seem to be determined to engage in any sort of rioting, according to Mark Finchem, Arizona State Representative, who chaired the Arizona Hearing on Election Fraud and attended Trump's rally on that day.

"People who were present at his speech, filed out of the venue in a jovial, orderly manner and walked the few miles to the Capitol," he notes.

For his part, Wall Street analyst and investigative journalist Charles Ortel observes that those breached into the building "was a tiny number compared to the massive total crowd".

"My sense as someone who was there is that the crowd of many hundreds of thousands was certainly frustrated by an apparent theft of the November 2020 election," he says. "An overwhelming majority of attendees assembled peacefully and patriotically. But others, most of them much younger, seemed to instigate and then lead the illegal assault on the Capitol building itself."

Together with Crowdsource the Truth founder Jason Goodman, Ortel filmed the gathering and the incident from a spot outside of the restricted area.

"I am unclear what time the building was breached exactly," the analyst recalls. "We arrived at the Capitol grounds about 15 to 30 minutes after President Trump finished his speech to find no barriers and no police guarding the back entrance."

Ortel notes that by the time they arrived, hundreds of people, perhaps thousands, already were inside the grounds, but only a few had begun to climb up the scaffolding and grandstands, or reached the Capitol building itself. Thousands more people streamed in continuously from the moment Ortel and Goodman arrived and afterwards.

Those Who Broke Into Capitol Building are Not Necessarily 'Trump Supporters'

"After a while, we noticed that younger, athletic people had, somehow, managed to climb up onto the scaffolds and grandstands and that there was little police reaction," the Wall Street analyst says. "Then, it seemed that flash bang grenades popped and tear gas flowed, but it is not yet clear who did this - police or perhaps athletic protesters who may or may not have been Trump supporters".

The group that took part in the Capitol breach appear to be comprised of people from all different walks of life.

There was Nick Ochs, a man who described himself as a "Proud Boy Elder from Hawaii". Another participant of the breach, Jake Angeli, dubbed "a Q-Anon Shaman" by the media, was earlier seen marching from the Maricopa County Courthouse to the Arizona State Capitol on Friday, 20 September 2019 during the state's climate strike – part of the Global Youth Climate Strike inspired by Swedish activist Greta Thunberg. However, QAnon "believers" have often been portrayed by the media as "climate change denialists" who endorsed Trump's decision to withdraw from the Paris Climate agreement.

For his part, American journalist Andy Ngo detected John Earle Sullivan, a Black Lives Matter activist from Utah, among the DC protesters. According to Ngo, Sullivan was "arrested and charged in July 2020 over a BLM-antifa riot where drivers in Provo were threatened and one was shot".

​Aaron Mostofsky, a registered Democrat and son of a New York Supreme Court judge, was also seen at the scene, as well as a newly-elected West Virginia Republican delegate Derrick Evans.

​Meanwhile, Citizen Lab researcher John Scott-Railton drew attention to a couple of individuals wearing tactical gear and believed to be carrying plastic “zip tie”, who were later identified as Larry Rendell Brock of Texas and Eric Gavelek Munchel of Tennessee.

​"I think it is important to identify every person who got inside the building, interrogate each of them and learn their individual backgrounds and motivations," stresses Ortel. "Until we do so with enough of them, I will reserve judgement as to whether the instigators and perpetrators were pro or anti-Trump. That said, I find it highly unusual that there was such lax security on the Capitol grounds and inside the building, given the long advance notice before this pivotal day, when security should have been placed on higher alert."

While the Capitol incident was described as an "insurrection" and an "attempted coup" by the mainstream media, summer Black Lives Matter riots which were portrayed as "largely peaceful protests" by the mainstream press, Finchem highlights.

"The difference in perception is the way in which propaganda has been used in the war of words," says Mark Finchem. "It is indeed important to note that there were no fires set, very little property damaged, and when people saw there was trouble brewing, many decided to leave."

He notes that what he saw playing out at the US Capitol "was not a storming of the building, but protesters walk up the steps of a public building, police officers allowing them to be there and basically have a photo-op moment".

"I was on the Supreme Court side of the Capitol and about 500 yards away, I was not a participant, which has been widely misrepresented, but a witness far removed," he says.

For his part, Charles Ortel drew attention to the videos of police allowing the protesters into the building and even holding doors for them, recorded by people on the ground and shared on Twitter.

​The unlawful behaviour at the Capitol Hill was a direct consequence of the months-long Black Lives Matter and Antifa riots across the US, accompanied by outright attacks on law enforcement agents and police premises as well as the damaging of federal property and establishment of self-declared "autonomous zones" in Seattle, Portland, Washington DC, and New York City, notes Ortel.

​These actions receive little if any reprimand from local Democratic authorities and senior Democrats apparently encouraging some individuals to further test the limits of the system, according to the analyst.

The nation's capital is legitimately on fire in every direction. This is unreal. pic.twitter.com/hXNJ0LticL

​"I would trace this farther back to the 1960s, when just protests against racial injustice, and America's role in Vietnam and Southeast Asia were hijacked by hard left anti-Constitutionalists keen to foment division and weaken America from within," he says. "It is particularly ironic to note that the same people (in some cases) during the 1960s and 1970s who demanded tolerance and consideration for their radical ideas are today relentlessly intolerant of ideas espoused by conservatives. Tolerance appears to be a one way street. The 'arc of history', at present, bends downward in America rushing towards darkness at breakneck speed."