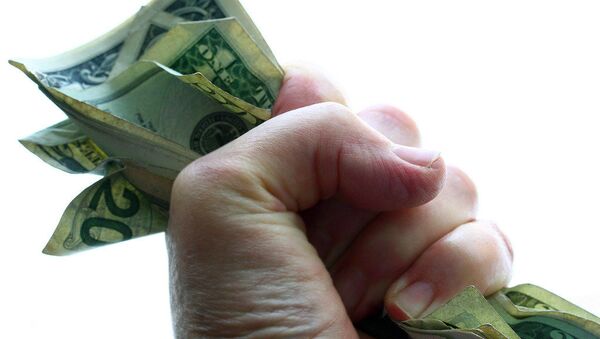 CC BY 2.0 / liz west / Greed
Subscribe
International
India
Africa
WASHINGTON (Sputnik) - The US economy looks set to improve in the second half of the year but will not likely be able to restore most of those jobs lost to the pandemic, Federal Reserve Chairman Jay Powell said after the central bank's first monthly policy meeting of the year.

"There's good evidence to support a stronger economy in the second half of this year," Powell told reporters on Wednesday.

The US central bank reiterated its pledge to buy more bonds to support the economy and said he believed widespread vaccinations will expedite recovery. The Fed earlier in the day announced that it would keep interest rates at zero. The three major US stock indices closed down more than 2 percent as a result of the announcement and concerns about the market being overbought.

But the Fed chairman also warned that the arrival of "more contagious and dangerous" versions of the virus - like the UK B.1.1.7 variant and South Africa’s B.1.351 strain - could slow the return to economic normalcy and further erode the Fed’s mandate of ensuring full employment.

Powell said certain sections of the labor market were likely to see longer-term damage from the pandemic, with some jobs permanently lost.

"Since the very beginning, it’s been our concern that people, if they become disconnected from the industry or job they used to work in, it can be years or never [before] they get back into the labor force," he said. "There are still nine or ten million people still out of work because of the pandemic."

The US economy shrank 5 percent in the first quarter of last year and 31.4 percent in the subsequent three months, as businesses shut down during the height of the pandemic and struggled on reopening. The third quarter appeared promising, with growth rebounding by 33.1 percent, before a new spike in COVID-19 infections and deaths from October impacted sentiment again. The first reading for the fourth quarter will be available on Thursday.

On the employment front, more than 21 million jobs were lost between March and April over economic lockdowns. A rebound of 2.5 million jobs was logged in May and 4.8 million in June, before the recovery began slowing. For both September and October, less than 700,000 jobs were added each month. In November, there were just 245,000 additions while December saw a loss of 140,000 jobs — the first such decline since April.

"The economy is a long way from our employment and inflation goals, and it is likely to take some time for substantial further progress to be achieved," Powell said. "Even after the economy fully reopens, I think we're going to need to keep people in mind whose lives have been disrupted because they lost the work that they did. I think it would be wise … if we were to look out for those people and help them find their way back into the labor force, even if it means continuing support for an additional period of time."

The United States itself is the country worst hit by the pandemic, with more than 25.5 million infections and more than 427,000 deaths.

As of a week ago, nearly 36 million doses of vaccines for the virus had been distributed to state and local governments but only about 16.5 million shots had been administered. President Joe Biden pressed this week for the availability of 100 million vaccines within the first 100 days of his administration and asked Congress to approve a $1.9 trillion stimulus to aid the plan and the recovery of the economy.