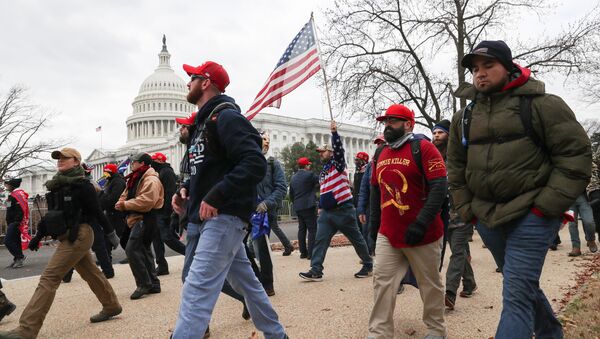 © REUTERS / LEAH MILLIS
Subscribe
International
India
Africa
Morgan Artyukhina
All materialsWrite to the author
Several dozen people have been arrested by Washington, DC, police in the hours after the storming of the US Capitol building on Wednesday, and federal investigators say their probe of the chaos is likely to last the rest of 2021.

Among the ample film footage taken at the US Capitol storming on Wednesday, several political figures have been identified, including known alt-right leaders, online politicos and even several state legislators.

Perhaps no single demonstrator at the event has acquired more press attention than Jake Angeli, who appeared shirtless in an eye-grabbing “Viking” outfit of animal furs and body paint

The 32-year-old Arizona resident is a well-known figure in the QAnon conspiracy theory movement, where he’s referred to as the “QAnon Shaman,” according to the Arizona Republic. 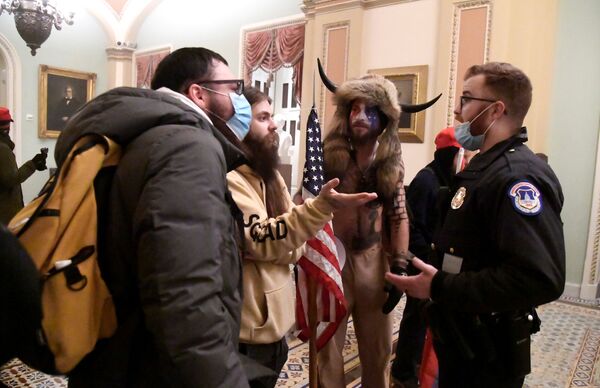 Police confront supporters of President Donald Trump as they demonstrate on the second floor of the U.S. Capitol near the entrance to the Senate after breaching security defenses, in Washington, U.S., January 6, 2021.
© REUTERS / MIKE THEILER

At first, accusations swirled online that Angeli, his identity unknown, was actually an Antifa agent provocateur. However, others who knew of him and his politics quickly stepped in to set the record straight.

He has appeared in similar garb at a number of protests during Trump’s presidency. At one protest in May, Arizona Republic reporter Brieanna Frank got an interview with Angeli, which she reposted on Wednesday, confirming Angeli’s identity.

QAnon adherents maintain that Trump is waging a secret war against a deep state cabal of Satan-worshippers that maintains a global child sex-trafficking network. It’s unclear where the claims began, but it’s likely they originated on anonymous internet image board 4chan in 2017.

Standing next to Angeli in the photo are two well-known alt-right figures: Matthew Heimbach, founder of the now-defunct Traditionalist Worker Party, a neo-Nazi group, has been identified as wearing the blue facemask.

Everyone who has noticed the "camp Auschwitz" shirt should know at least some of the men who got into the Capitol today have been identified as former members of the Traditionalist Workers Party, a literal neo-Nazi organization. Here they are at other neo-Nazi meetings: pic.twitter.com/3pZodVFtyG

​Heimbach was instrumental in organizing and promoting the “Unite the Right” rally in Charlottesville, Virginia, in August 2017 that brought together more than a thousand members of various white supremacist, white nationalist and neo-Nazi groups and which saw counter-protester Heather Heyer murdered by one of the attendees using his car. However, his group disbanded the following year amid personal intrigues between members of its leadership, including Heimbach.

The man with the large beard between them is reportedly Jason Tankersley, a member of Maryland State Skinheads, another white supremacist group.

One person who not just admitted to participating in the insurrection but actually reveled in it was Tim Gionet, better known as the white nationalist internet personality Baked Alaska.

Gionet streamed the entire event on the blockchain service DLive and is seen at one point attempting to call US President Donald Trump from inside a lawmaker’s office.

"Let's call Trump. He'll be happy. We're fighting for Trump." then continues, "We need to get our boy Donald J. Trump into office."pic.twitter.com/WIy0sUwKIO

​Gionet is categorized as a white nationalist by the Southern Poverty Law Center for his anti-Semitic views that include Holocaust denial. He also participated in the August 2017 “Unite the Right” rally in Charlottesville. His YouTube channel was banned in October 2020 after he filmed himself committing crimes and harassing people for wearing facemasks.

Incidentally, while Gionet is seen maskless among the throngs of rioters inside the Capitol on the livestream, he admitted on his stream just two days earlier that he had tested positive for COVID-19.

However, not seen much at the protests in an unusual display of invisibility were the Proud Boys. Leader Enrique Tarrio was arrested and banned from Washington, DC, in the days before the January 6 insurrection in connection with an attack on several Black churches in DC that he admitted to perpetrating.

Prior to the notoriously violent group’s arrival, Tarrio said the group would appear “incognito” at the protest instead of in their typical uniform of Fred Perry’s polo shirts and personal effects stamped with their laurel wreath emblem.

“The ProudBoys will turn out in record numbers on Jan 6th but this time with a twist... We will not be wearing our traditional Black and Yellow. We will be incognito and we will spread across downtown DC in smaller teams. And who knows....we might dress in all BLACK for the occasion", Tarrio wrote last week on Parler, a social media network that has become popular with far-right figures.

Proud boys fight in front of the Capitol pic.twitter.com/0Zbb62EdWt

​Despite his claims, Proud Boys nonetheless appeared in their standard garb outside the Capitol, where they were filmed in a fight with unknown persons as they unleashed a hail of paintball rounds.

Another hate group that joined the insurrection was the National Socialist Club (NSC) 131, a small but violent neo-Nazi group with chapters in several countries.

Its not just the Proud Boys - Chris Hood and his national socialist club (nsc-131) posted photos on Telegram from outside the Capitol this afternoon pic.twitter.com/nuGkbXEB18

​One image posted on Telegram with the timestamp 4:10 p.m. on January 6 shows someone holding up a business card with the group’s logo on it and the message “the US Capitol building is now a 131 zone.”

In addition to the slew of alt-right personalities, at least six Republican state legislators from across the US participated in the storming of the Capitol on Wednesday.

One lawmaker, West Virginia Delegate Derrick Evans, was only elected in November and has not even been sworn into office yet. Evans posted a video of himself entering the building on Wednesday before deleting it. However, copies are still circulating on Twitter.

​“We’re in, baby!” Evans can be heard yelling in the video, which shows dozens of people forcing the doors of the Capitol open with their body weight. Evans is now facing calls for his resignation back home, with more than 33,000 people signing a petition demanding he step down.

“I want to assure you all that I did not have any negative interactions with law enforcement nor did I participate in any destruction that may have occurred,” Evans told West Virginia Metro News, describing himself as “an independent member of the media to film history.”

Other state lawmakers who joined the insurrection included Tennessee state Rep. Terri Lynn Weaver, who told the Tennessean she was “in the thick of it” but denied any violence taking place. “Just a whole heck of a lot of patriots here,” she told the outlet, calling it “an epic and historic day.”

Another was Virginia gubernatorial candidate and state Sen. Amanda Chase, who similarly denied violence taking place, according to the Henrico Citizen, which noted she later referred to having several people “on the ground.” She also spoke at the event. Last month, she called for Trump to declare martial law to overturn the results of the November election.

Michigan state Rep. Matt Maddock organized busloads of protesters going to the event and himself spoke at it. It’s unclear if he participated in the storming of the Capitol, but his wife, Meshawn, a prominent Republican leader in Michigan, reportedly posted a video to Instagram urging the protesters to “march on the Capitol and drag these people out of power,” according to the Detroit Free Press.

Several other state lawmakers attended the protests and spoke, but don’t seem to have participated in the storming of the Capitol. One, Pennsylvania state Sen. Doug Mastriano, said he found the violence “repugnant, disgusting and threatening,” according to Harrisburg ABC affiliate WHTM, which noted he nonetheless faces calls for resignation back home.

The insurrection began on Wednesday after Trump addressed thousands of his followers at a “Stop the Steal” event outside the White House. Trump has maintained US President-elect Joe Biden’s November 2020 election victory was fraudulently engineered and he has rejected the outcome, as well as the numerous recounts and certifications of the results that continue to show him as the loser of the race.

We will never give up, we will never concede,” Trump told the crowd. “We will stop the steal!”

The protesters then proceeded down the National Mall to the US Capitol, where federal lawmakers were meeting to give the final certification of the Electoral College votes identifying BIden as the winner. After skirmishing with police, some officers seemingly let the protesters into the Capitol, which they proceeded to ransack. However, the Electoral College ballots were secured, and after the insurrectionists were evicted, lawmakers reconvened and finished the certification.

Four people died in the event: one woman was shot by a Capitol security guard and died of her wounds, while three others suffered medical emergencies.