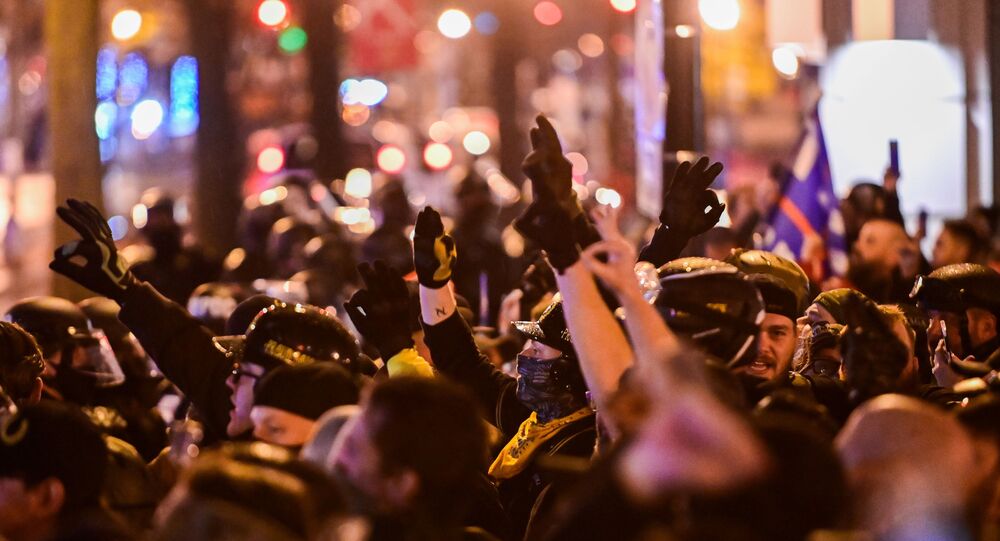 Ahead of the 6 January certification of the Electoral College voting result, the current US president, Donald Trump, has proclaimed a 'BIG' rally in Washington DC to protest the 2020 presidential election outcome. Additional protests by Trump supporters are said to have been scheduled for the same day in downtown DC.

Conservative right-wing group Proud Boys announced that they would gather in Washington DC, where several protest demonstrations are planned for 6 January.

"The ProudBoys will turn out in record numbers on Jan 6th but this time with a twist... We will not be wearing our traditional Black and Yellow. We will be incognito and we will spread across downtown DC in smaller teams. And who knows....we might dress in all BLACK for the occasion", he wrote.

Announcing his group plans, Tarrio also commented on the closure of their alleged "base hotel", claiming that "With the new ability I’ve being able to put 1000 boots on the ground we outgrew any single hotel".

Antifa protesters, deemed by some to be the primary opponents of the Proud Boys, are expected to participate in 6 January protests in DC, and many predict that a mass brawl could start at the public demonstrations.

Violent confrontations between right-wing Proud Boys and left-wing anti-fascist groups have significantly increased in recent months amid social unrest, especially in Portland, Oregon. As The Washington Post reported, citing extremism experts, DC could be the next battleground.

On Friday, outgoing US President Donald Trump announced a 6 January "Stop the Steal" protest rally in Washington DC at 11 am, local time, the day that teh joint session in the US Congress will be summoned to certify the Electoral College vote. Thousands of people are expected to attend the event.

On the night of 31 December to first of January, a protest turned to riot in Portland. Participants painted graffiti, smashed shop windows and set fires, reportedly using Molotov cocktails against police.

Portland Mayor Ted Wheeler criticized "radical antifa and anarchists", questioning during a Friday press conference “why would a group of largely white, young and some middle-age men destroy the livelihood of others who are struggling to get by”.

On December 14, the Electoral College vote gave a victory in the 2020 presidential race to Joe Biden after all 50 states as well as the US territories officially certified the results. Trump has refused to concede, claiming the election outcome was rigged. Biden's inauguration is scheduled for January 20, as the Democrat got 306 electoral votes and Trump got 232.

Several People Arrested as Protesters Clash With Police in Portland