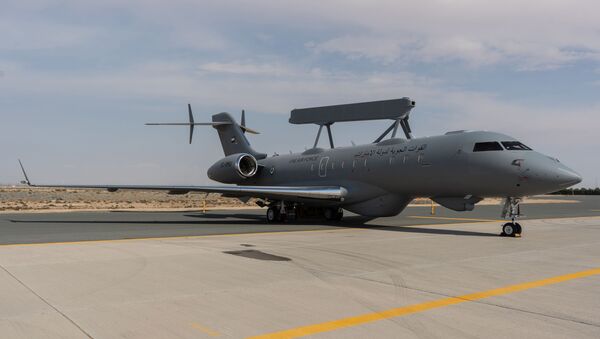 Morgan Artyukhina
All materialsWrite to the author
US President-elect Joe Biden has pledged to end US support for the Saudi-led coalition’s war in Yemen, and alliance members including Saudi Arabia and the United Arab Emirates have been racing to complete their weapons buys before Biden’s inauguration later this month.

On Monday, Swedish aerospace company Saab announced Abu Dhabi had placed a $1 billion order for two more GlobalEye spy aircraft. The airborne early warning and control (AEW&C) aircraft is a modified Bombardier Global 6000 business jet with a long-range radar and other surveillance systems attached, and is reinforced against electronic attacks.

“We are proud that the United Arab Emirates continues to show great trust in Saab and our solutions,” Saab CEO Micael Johansson was quoted as saying in the release. “It shows that Saab remains on the cutting edge regarding advanced technology. The Global Eye program is running according to plan and we have an efficient cooperation with the customer.”

The UAE previously bought three GlobalEyes from Saab in 2015, with the second being delivered in April 2020. Monday’s deal is expected to be finished by 2025, according to Saab. The aircraft’s airborne early warning radar can track not only aircraft in flight out to 450 kilometers away, but also ballistic missiles in flight. However, it also carries a maritime surveillance radar, enabling it to track surface and sea targets while aloft as well.

The announcement of the deal comes as a US group moves to block another aircraft deal with the UAE from proceeding.

On December 30, the New York Center for Foreign Policy Affairs (NYCFPA) think tank announced a lawsuit against the US State Department and Secretary of State Mike Pompeo alleging the sale of as many as 50 F-35 Lightning II stealth aircraft, as well as 8 MQ-9B Reaper drones and a variety of munitions, has been allowed to proceed against US law.

According to the think tank, the deal has been rushed without guaranteeing Abu Dhabi won’t share proprietary information about the stealthy F-35 with China or Russia. The potential to buy the advanced F-35, which Israel is the only Middle Eastern nation the US has so far allowed to possess, was part of the deal brokered by Washington last year that saw the UAE and Israel agree to normalize relations.

Federal lawmakers failed in their own bid to block the sale last month, Sputnik reported.

“With this deal going forward, the US is setting a baseline for a very dangerous proliferation of weapons in the region and is enabling an arms race to start in the Middle East.” NYCFPA Principal Director Justin Russell said in a news release, adding, “NYCFPA also calls on the incoming Biden administration to reconsider this deal for the benefit of peace in the region.”

Indeed, Biden has pledged to end US support for the catastrophic war in Yemen, which has been waged by Saudi Arabia and its allies, including the UAE, since 2015. Outrage over news that US forces had been operating in Yemen near the Saudi border and that the Pentagon had provided logistical support for the Saudi coalition caused the Trump administration to step back from some of that support in late 2018, but congressional attempts to block future weapons sales to Riyadh and its allies have been rejected by US President Donald Trump.

Investigations of war materiel in Yemen have revealed extensive support by the UAE as well as Saudi Arabia, with multiple weapons systems sold solely to Abu Dhabi appearing in the hands of Yemeni militias, including Al Qaeda in the Arabian Peninsula.

Biden spoke out against the war in early 2019, calling on Trump to end US support for Saudi coalition operations, and many of his senior staff picks are signatories to a 2018 open letter calling for the same, including Antony Blinken, whom Biden has picked to be secretary of state; Avril Hanes, whom he has nominated as director of national intelligence; and Linda Thomas-Greenfield, Biden’s pick as US ambassador to the United Nations.

With that in mind, the US State Department approved on December 30 a new weapons sale to Saudi Arabia. The $290 million deal would see Riyadh supplied with 3,000 of Boeing’s GBU-39 SDB I Small Diameter Bombs, as well as “containers; weapon support and support equipment; spare and repair parts; US Government and contractor engineering, technical and logistical support services; and other related elements of logistical and program support,” according to the Defense Security Cooperation Agency. Congress will still have to approve the deal.