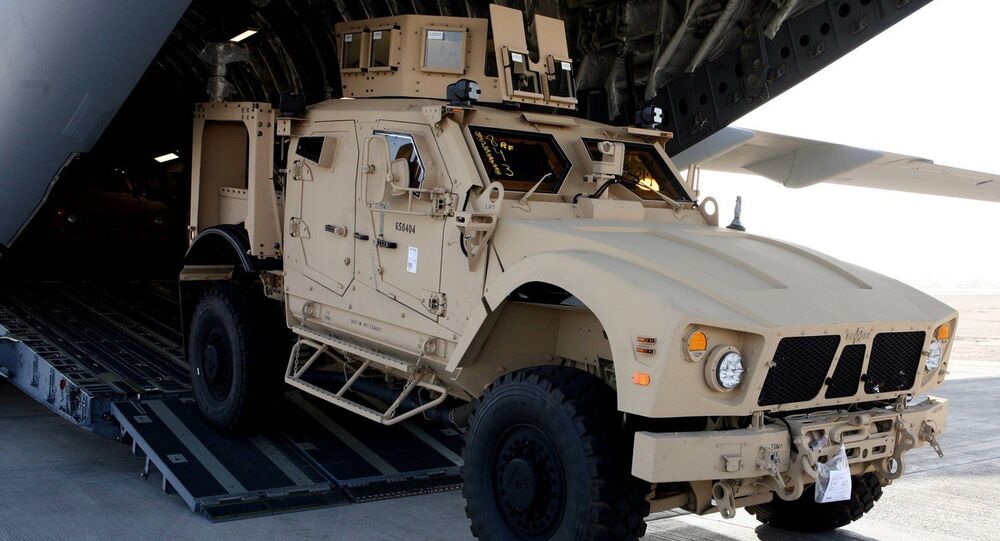 Twin reports published this week by Amnesty International and CNN reveal the extent to which the United Arab Emirates is funneling weapons of war obtained from Western governments to its proxies in Yemen.

© REUTERS / Khaled Abdullah
‘Starts Us on a Path of Obeying the Law’: Senators Again Advance Resolution to End US Support for Yemen War
May Darwich, an assistant professor of international relations in the Middle East in the School of Government and International Affairs at the UK's Durham University, told Sputnik Wednesday that the reports were "a little bit contradictory" in their selective outrage, noting that while they are rightly horrified at the humanitarian situation created by the war and the role the proliferation of foreign arms plays in that, there's comparatively little outcry about billions of dollars in weapons being supplied to absolute monarchies in the first place.

"On the one hand, the US has been kind of supporting Saudi Arabia and the UAE, as long as they are themselves committing the war crimes, but it kind of becomes a little bit more problematic if they start selling these arms to other groups who are also doing the same kind of crimes. So it is a little bit contradictory in that sense," Darwich told Radio Sputnik's Loud and Clear Wednesday.

​CNN's report, "Sold to an Ally, Lost to an Enemy," was published Monday, and Amnesty International's report, "When arms go astray: Yemen's deadly new threat of arms diversion to militias," followed on Wednesday. Both reports document how arms sold to the UAE by Western powers, including the United States, have been used "as a form of currency to buy the loyalties of militias or tribes, bolster chosen armed actors and influence the complex political landscape," as local commanders on the ground told CNN.

"Since the outbreak of the Yemen conflict, states have supplied over $3.5 billion worth of heavy conventional weapons, small arms, light weapons and associated parts and ammunition to the UAE alone," AI notes. "Western states and others continue to supply the UAE, along with Saudi Arabia and other coalition members, with arms."

Since 2001, the US by itself has supplied the UAE with $6 billion in weapons, according to DoD figures, but has made a total of $22 billion in arms agreements with the country.

The reports name a litany of equipment found to be in use by third parties in Yemen, ranging from French LeClerc main battle tanks to American-made Oshkosh M-ATV and MRAP vehicles and Belgian and Serbian machine guns. Particularly damning are the appearances of Agrab Mk2s, a uniquely South African design that combines a Singaporean mortar system with a South African RG-31 armored vehicle. The only nation to ever buy the Agrab has been the UAE, AI's report notes.

The US Department of Defense told CNN for its report that the Saudi-led coalition was breaking the terms of sale with the US by passing the equipment to third parties and that the Pentagon was opening an investigation into the issue. AI's report also notes that states supplying arms to anyone in the Yemen conflict are in violation of the Arms Trade Treaty of 2014.

"The United States has not authorized the Kingdom of Saudi Arabia or the United Arab Emirates to re-transfer any equipment to parties inside Yemen," Pentagon spokesman Johnny Michael told CNN. "The US government cannot comment on any pending investigations of claims of end-use violations of defense articles and services transferred to our allies and partners."

CNN documents how these weapons have vastly proliferated among different factions in Yemen, including al-Qaeda in the Arabian Peninsula (AQAP), which controls much of the center and east of the country and now counts in its arsenal Oshkosh armored vehicles and American-made TOW anti-tank missiles.

Another coalition-aligned Islamist militia, Alwiyat al Amalqa or "The Giants Brigade," drives around in MRAP vehicles, designed by the US to resist improvised explosive devices and ambush attacks during the Iraq War. Serial numbers on the vehicles reveal they were built in the US and sold to the UAE in 2014, CNN reported.

On the coalition end, all parties denied to CNN "in no uncertain terms that we are in violation of end-user agreements in any manner," as an Emirati official put it. They said the Giants Brigade is a "part of Yemeni forces" under the direct supervision of the UAE, meaning they hadn't given the equipment away, but it was rather in the "collective possession" of the coalition.

Saying it would be difficult to prove AI's claims, Darwich told Sputnik, "Definitely we have to take these claims very seriously, and also the situation in Yemen kind of more or less provides evidence for these kind of claims. So in general, whether the UAE has been actually selling these arms, it is very likely this has been happening in Yemen in the last few years…. in a way, kind of claiming or kind of accusing the UAE and Saudi Arabia of selling arms and kind of violating human rights and kind of committing war crimes indirectly, I think it more or less conforms to what the coalition has been already doing on the ground."

Noting the incredible proliferation of factions in the war, Darwich told hosts John Kiriakou and Brian Becker that the question of alignment wasn't so much Sunni vs. Shia, but "the political positions of the groups that really matters."

"So on the one hand, the Saudis are more kind of supportive of the Yemeni government, and the UAE in the last couple of years have had their own independent strategy of expanding in the south of the country," where she noted they are mainly supporting groups affiliated with Islamic Jihad and al-Qaeda.

"Part of the UAE's agenda is playing more and controlling the southern part, and supporting these secessionist groups has been one of their main strategies all along."

"So the report, in that particular detail, they are saying they [the UAE] are kind of violating the agreement between the US and the UAE regarding not selling these arms or not selling them to particular groups. But definitely, I think this is the major issue. I don't think the major issue is about the human crisis, because the humanitarian crisis has been there in Yemen since 2015, and this has been a fact on the ground. Nevertheless, the US continues to support both monarchies," Darwich said of Saudi Arabia and the UAE.

© Sputnik
Will the Stockholm Ceasefire in Yemen Hold?

The professor told Sputnik that for Yemen, "unfortunately the future does not look really bright."

"Unfortunately, as long as the arms sales are continuing and the conflict is more or less driven by external and international actors rather than local players, I think this adds another layer of complexity. So now it's not just about bringing the local groups and sitting and having a peace talk to solve this civil war; it's rather a more complicated process, because we have external actors like Saudi Arabia, the UAE — let alone the EU, US, Iran — and kind of solving or bringing all these actors to the table is not very likely," she said.

Noting the history of repeated, failed peace talks, Darwich said, "There is a high level of mistrust among actors, especially from the side of the Houthis toward Saudi Arabia, but also other local groups."