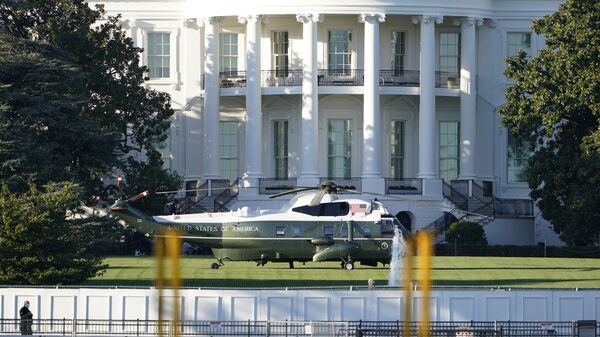 © AP Photo / Manuel Balce Ceneta
Subscribe
International
India
Africa
Morgan Artyukhina
All materialsWrite to the author
While US Secretary of State Mike Pompeo has claimed Iran is responsible for the December 20 bombardment of the Green Zone in Baghdad, Tehran has strongly denied involvement. Similar claims were made a year ago, just days before the US assassinated Iranian Maj. Gen. Qasem Soleimani outside Baghdad.

According to a senior US administration official, US President Donald Trump was joined by defense leaders at the White House on Wednesday to discuss possible responses to an attack against the US embassy in Baghdad on Sunday.

The meeting reportedly included Pompeo, acting US Defense Secretary Christopher Miller, White House national security adviser Robert O'Brien, and other top defense officials. They intend to offer "a range of options" to Trump to deter attacks against US personnel by Iran or by militias in Iraq that are sympathetic to Iran.

The Sunday bombardment of the Green Zone, a fortified area in central Baghdad that houses the US embassy, managed to penetrate US anti-missile defenses and do "minor damage" to the embassy compound. An Iraqi civilian was killed, and several others were injured.

Iraqi Prime Minister Mustafa Al-Kadhimi denounced the attack, saying on Monday that a round of arrests prevented a second attack from being carried out, although he named no groups allegedly responsible for the first attack. However, Pompeo firmly pointed the finger at "Iran-backed militias."

Tehran has denied involvement in the attack. "The US military presence is the source of instability in our region. No amount of spin can divert blame for its evils," Iranian Foreign Ministry spokesperson Saeed Khatibzadeh said on Twitter on Monday.

The US made similar claims this time last year after the US blamed Kata'ib Hezbollah, a Shiite militia in Iraq's Popular Mobilization Forces, for a December 27, 2019, attack on an Iraqi base in Kirkuk that killed a US contractor and injured four US service members and two Iraqi service members. When the US launched an airstrike on Kata'ib Hezbollah positions the next day, mass protests descended on the US embassy and set fire to some of its outer structures, and Washington blamed Tehran for instigating those attacks as well.