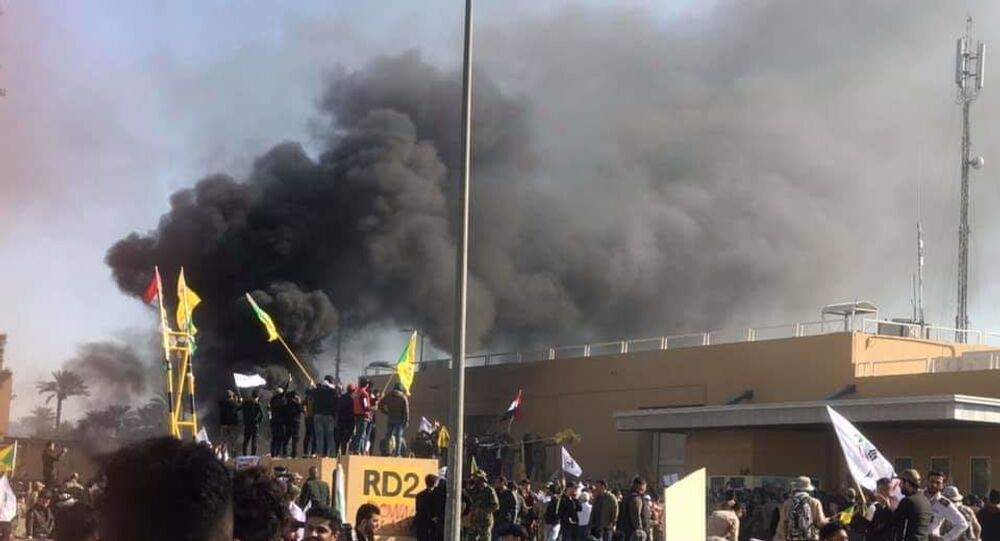 On 31 December, as the whole world was preparing to ring in the new decade, Iraqi militias stormed the entrances to the American Embassy in Iraq after a series of US airstrikes in the area. The assault saw the Pentagon act immediately by boosting personnel around the embassy with security guards resorting to tear gas to disperse the protesters.

Impressive pictures and videos have been shared online revealing scenes of destruction inside the US Embassy in Baghdad shortly after the building was stormed by protesters over New Year’s Eve.

US is sending hundreds more troops to the Middle East after protesters storm its embassy compound in Iraq, setting fires and chanting "Death to America!" pic.twitter.com/8MozxCpjhb

The circulated snapshots feature windows blown out with smoke rising from a reception room in the embassy, the checkpoint of which was left in complete ruins as a result of the assault.

US Occupation Forces fire Tear Gas to try & disperse protesters outside the US Embassy in Baghdad.

It doesn't work.
After the #QaimMassacre of 32 Iraqi Security Forces by American Terrorists, Iraqis are demanding the expulsion of all US Occupation Forcespic.twitter.com/AQm5flJPor

Separate videos show raging crowds attempting to batter down doors and set fire to the fence:

JUST IN: US Embassy in Baghdad is under siege by the Iranian backed militia. Trump’s “Benghazi” moment? pic.twitter.com/IvJdHytQvE

This latest US Terrorist Attack murdered 32 Iraqi soldiers fighting ISIS
Iraq is demanding the expulsion of all US forcespic.twitter.com/NV1MYHC130

#Iraq
New video from the #US embassy in #Baghdad.
It seems that these protests will continue to become a full-fledged anti-American movement and in later stages includes offices, NGOs and companies belong to US in each province of Iraq! pic.twitter.com/Vk2s1j0q2A

On Tuesday, Iraqi protesters set fire first to the outer fence of the US Embassy in Baghdad and then the checkpoint, in response to recent American airstrikes against the Iraqi Shia Kata’ib Hezbollah militia.

To quell the unrest in the Iraqi capital, which spanned roughly two days, Trump ordered to dispatch additional Marines to the area. US troops dropped flares from aircraft and fired tear gas to disperse the protesting militias, some of whom were hurling rocks and trying to set fire to walls or attempting to climb the compound’s walls, CNN reported citing witnesses.

Iraqi security forces have for now regained control of the area around the embattled compound, as the protesters were cleared away from the entrance to the embassy on Wednesday evening.

US officials instantly put the blame for the New Year's attack on Iran, with POTUS Trump threatening Tehran with countermeasures.

"Iran will be held fully responsible for lives lost, or damage incurred, at any of our facilities", Trump tweeted. "They will pay a very BIG PRICE! This is not a Warning, it is a Threat".

"If you were logical -- which you're not -- you'd see that your crimes in Iraq, Afghanistan... have made nations hate you", Iran's Supreme Leader Ayatollah Ali Khamenei hit back adding the US “can’t do anything".