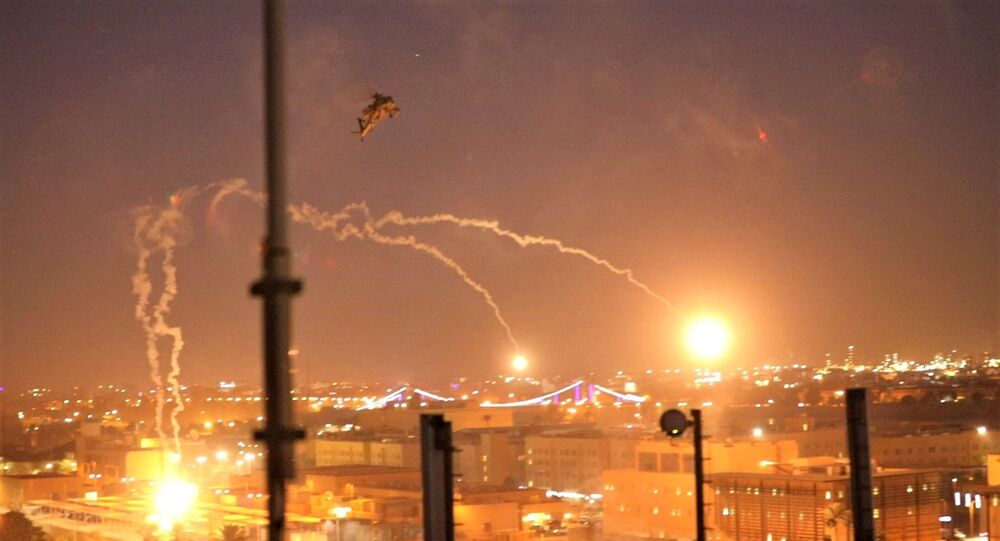 The development comes on the heels of the Friday morning US airstrike that killed Quds Force Commander Qasem Soleimani, sparking heightened tension across the Middle East and sending thousands of Iranians into the streets to mourn the death of the general and denounce the United States and Israel.

A two-car convoy has been hit in a new airstrike in northern Baghdad, local media reported.

Following the initial reports claiming that a targeted vehicle was carrying senior leaders, the Popular Mobilizations Forces (PMF) issued a statement, saying that "the strike targeted a convoy of Popular Mobilisation Forces medics".

While some reports suggested that the parties involved in the incident are unknown, others claimed that the US attacked a PMF convoy carrying the commander of the Kataib Imam Ali militia, Shbl al-Zaidi, and other yet-to-be-identified PMF leaders.

#BREAKING: Reports indicate that Shbl al-Zaidi, commander of Kataib Imam Ali militia, was targeted by a US airstrike near Taji, northern Baghdad.#Iraq pic.twitter.com/AbuHaUPt7p

Conflicting reports were emerging that al-Zaidi was not killed in the attack as he was reported to have been in Lebanon.

Another senior figure believed to be in one of the targeted convoy vehicles is reportedly named Qais al-Khazali.

#BREAKING #NOW
Some Iraqi media report that the leader of the Asa'ib Ahl al-Haq militia, Qais al-Khazali, and his brother, Laith al-Khazali, were killed in the burning convoy.#Iraq #Iran #IRGC #PMU #USA pic.twitter.com/bTOptl7nv1

Netizens shared alleged photos from the site of the incident.

Unconfirmed image from the reported assassination in N. Baghdad this evening, 7 people killed or wounded. pic.twitter.com/8n0Tk2Gmgi

​The US drone attack near the Baghdad airport which killed Soleimani was described by the Trump administration as a preemptive action against Soleimani to "stop a war". Tehran, however, said that the US crossed a "red line", vowing retaliation.

Heightened tensions between Washington and Tehran occurred earlier this week when the United States accused the Iranian-backed Kataib Hezbollah militia group of launching a 27 December attack on a US military base near the city of Kirkuk which killed a US contractor. In retaliation, the US launched a strike against Kataib Hezbollah's forces, killing about two dozen of its fighters, triggering Shiite protesters' attempts to storm the gates of the US embassy in Baghdad.