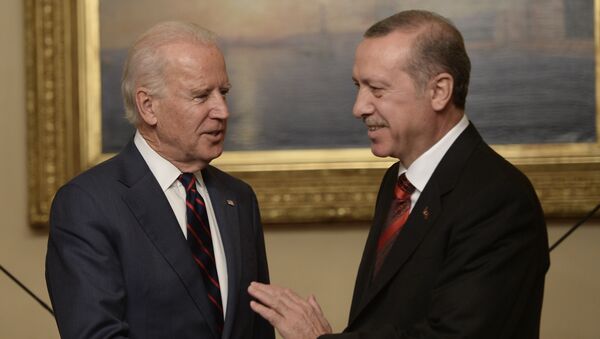 © AFP 2023 / BULENT KILIC
Subscribe
International
India
Africa
Ekaterina Blinova
All materialsWrite to the author
Changing the occupant of the White House will not affect Washington's major strategy towards Turkey and the Middle East in general, say Turkish observers, explaining why Ankara can no longer be reliant on the US and its model of democracy.

According to Axios, the potential Biden administration may share a lot of aims with Ankara on a number of issues, including Turkey's relations with Russia, Iran as well as Erdogan's Syria strategy. Meanwhile, the US State Department has announced a programme aimed at "reinforcing democratic values" in Turkey and fostering US-Turkish ties in 2021 among other issues.

'Turkey's Dependency on the US is No Longer Possible'

"The signals sent to Biden by both the Turkish opposition and official Ankara indicate that those who set the tone in Turkish politics, first, did not learn a lesson from the coup attempt on 15 July [2016]; second, they are not able to realise that threats to Turkey's national interests are coming from the United States; and, third, they are not very well aware of new global trends", argues Turkish journalist and political observer Mehmet Ali Guller.

The journalist does not believe the US effort to "reinforce democratic values" in the country may yield any positive results for the Turkish society.

“Democratisation with the assistance of the United States is, per se, impossible", he says. "As you know, the US brought the Latin America countries coups and instability rather than democracy. We have all seen how Washington previously established 'democracy' in Vietnam, Iraq, Libya, and Syria."

Furthermore, the recent African-American protest movements have indicated that the US is not a democratic role model for other countries, according to Guller.

"In fact, at the present time, probably, there is no more paradoxical, inhuman and anti-democratic situation than the example of which the United States is showing us", the political observer says.

The return to dependency on the US is impossible for Turkey since this step "is fraught with a huge number of problems and difficulties", including potential coups, economic shocks, abandonment of national interests and inner splits, warns Guller. 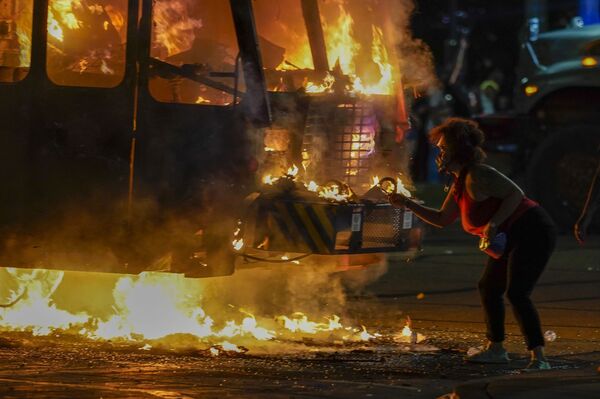 A protester lights a cigarette on a garbage truck that was set on fire during protests late Monday, Aug. 24, 2020, in Kenosha, Wis., sparked by the shooting of Jacob Blake by a Kenosha Police officer a day earlier.
© AP Photo / Morry Gash

Besides this, there are also certain "structural problems" at the heart of Turkish-American relations caused by the difference in approaches and fundamental assessments of the two states, says Baris Doster, a political scientist, expert on international relations and professor at Marmara University.

Turkish-American relations have structural problems that date back to the Sixties after President Lyndon Johnson sent a tough letter to Turkey's then Prime Minister, Ismet Inonu, about the Cyprus crisis in June 1964, the political scientist says.

Doster points out that there have been hundreds of crises in relations between Washington and Ankara including the 1960 U-2 incident, the Cuban missile crisis, US support for Kurdish militias regarded as terrorist organisations by Turkey, America's alleged role in the 15 July 2016 coup attempt, the Halkbank case, the situation surrounding the arrest of American Evangelical Pastor Andrew Brunson in 2016 in Turkey, and many others.

The main reason for the US-Turkish contradictions is the difference between the two countries in the definition, understanding and perception of the world and the region in which they are located, according to the professor.

"One country is a medium-sized state, the other is a large imperialist power," he says. "In addition, the two countries have a completely different understanding of threats, allied relations, different priorities, goals, expectations and interests. And these bilateral relations are unbalanced and problematic, regardless of the specific figures in power in Turkey and the United States."

He is sceptical that Washington's will be able to demonstrate flexibility in dealing with Ankara regardless of Turkish political forces' goodwill.

"We see how the Turkish leadership is sending friendly signals to Washington being driven by internal problems and an active search for foreign investment," he remarks. "Where will it lead? I think the United States will not show flexibility, Turkey will have to show it instead. The US will not abandon its Iranian, Iraqi and Syrian policies, neither will it halt its support for terrorist organisations and the project to create a Kurdish state. In this respect, American policy will remain unchanged."

Turkey may expect Washington to change its rhetoric in the case of a Biden administration, but one should delude oneself into thinking that the White House will change its strategic orientation, Doster concludes.