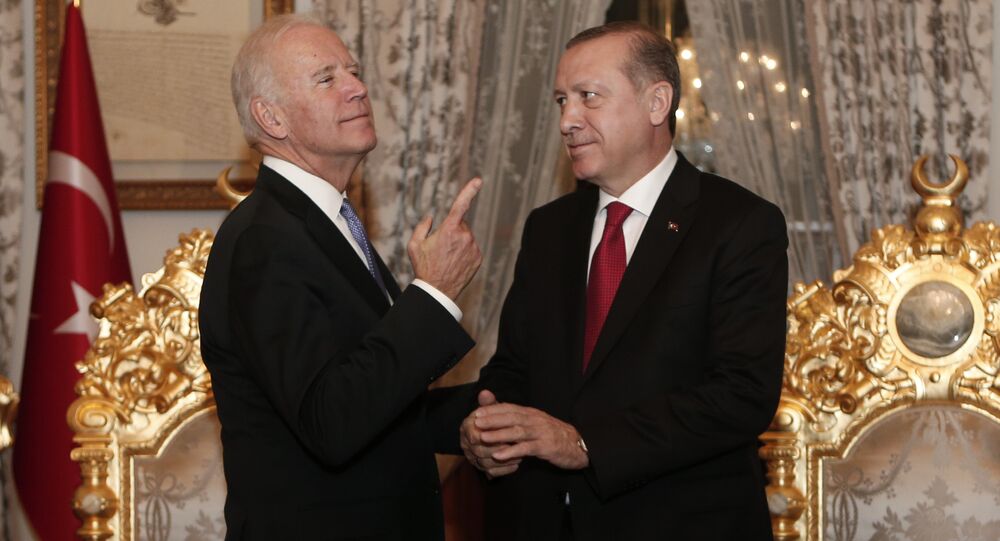 On Tuesday, Joe Biden selected Antony Blinken as his choice for secretary of state. A veteran Washington insider and former Obama administration official, Blinken has been a major proponent of preserving good relations with Ankara, including at the possible expense of US cooperation with its Kurdish allies in Syria.

Turkish authorities are attempting to patch up ties with the United States, Europe and Saudi Arabia in the wake of Joe Biden’s increasingly likely election victory, the threat of Brussels’ sanctions and problems with Russia, Bloomberg has reported, citing persons said to be ‘familiar with the discussions'.

According to Bloomberg’s sources, Turkish officials are calculating that Biden’s ‘enduring faith in multinational institutions and transatlantic ties’ could help Ankara repair recently strained ties with NATO and potentially allow it to regain access to advanced US weapons systems. Turkey is said to already be lobbying other NATO countries, including Canada, to end their export ban on drone-related engine technology, and to be seeking an agreement with France for the joint production of Eurosam anti-air missiles.

The sources also indicated that Ankara may agree to formally separate its Russian-made S-400 air defence missile systems from NATO air defence systems in a bid to soothe tensions.

On the European front, Turkey is reportedly concerned over Brussels’ possible plans to slap it with sanctions over its ongoing maritime gas exploration dispute with EU members Greece and Cyprus at the upcoming 10 December European Council meeting.

Bloomberg maintains that there are a number of unresolved issues in relations between Ankara and Moscow as well, on topics ranging from the war in Libya to Syria to Nagorno-Karabakh, with Turkey recently charged with delivering advanced drone systems to Azerbaijan and approving the deployment of troops to the South Caucasus nation for ‘peacekeeping’.

Ankara is also said to be seeking to soothe ties with Riyadh, with the diplomatic offensive coming over two years after the killing of a Washington Post journalist in the Saudi consulate in Istanbul in October 2018, Bloomberg’s sources said, referencing a recent telephone call between Turkish President Recep Tayyip Erdogan and Saudi monarch Salman bin Abdulaziz.

Erdogan congratulated Joe Biden on his election win on 11 November, promising to “work closely” with the new administration “in the upcoming period,” and saying he felt that “the strong cooperation and alliance between our countries will continue to contribute to world peace”.

On Thursday, Numan Kurtulmus, deputy chairman of Erdogan’s ruling Justice and Development Party, said a Biden administration will be more reluctant to slap sanctions on Ankara over its S-400 purchase than the current White House, predicting “positive steps in the future” from Washington and saying Biden “will most likely watch the balance in the Middle East very carefully for US interests”.

On Tuesday, Biden formally announced plans to nominate former deputy secretary of state Antony Blinken to the position of secretary of state. Blinken, who previously served as national security advisor to Biden while he was vice president under Barack Obama, has repeatedly expressed the need for Washington to preserve a close partnership with Turkey, vocally condemning the 2016 Turkish coup attempt against Erdogan, and hinting in 2015 that the US may need to sacrifice its close ties with Syria’s Kurdish militias in favour of Ankara, since picking between Turkey and the Kurds is “not even a matter of discussion.”

US-Turkish relations have suffered a major decline over the past several years over issues ranging from US assistance to Syria’s Kurds to Washington’s decision to boot Ankara out of the F-35 programme and threats to introduce sanctions over Turkey’s S-400 purchase, to the Justice Department’s indictment of a major Turkish bank on charges of evading Iran sanctions, to increased tariffs on Turkish steel and aluminium.

The fate of the Trump-Biden transition remains uncertain, as the incumbent president continues to maintain that hundreds of thousands of votes were “created out of thin air” by his opponents, robbing him of victory in half-a-dozen key battleground states in the November 3 election.

Turkey's Erdogan Expected to Stand Down in Spat With EU If Bloc Shows Unity, Reports Suggest