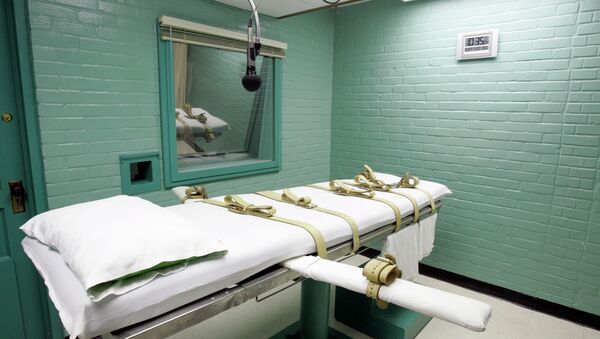 Morgan Artyukhina
All materialsWrite to the author
The death penalty is outlawed in 21 US states, and before a July policy reversal by US President Donald Trump, the US federal government hadn’t executed someone in 17 years. Since then, a record number have been killed by lethal injection, and more are scheduled for the next two months.

A federal appeals court struck down attempts to block several federal executions scheduled for the final two months of Trump’s first term. On Wednesday, the US Court of Appeals for the DC Circuit refused to delay two scheduled executions, including one set for Thursday.

Death row prisoners and their advocates have pushed for a halting of federal executions until the government agrees to administer the pain reliever pentobarbital alongside the death-inducing lethal injection. While Judges Patricia A. Millett and Neomi Rao refused to delay the scheduled executions, they left the door open to continuing litigation efforts.

As a result of the order, three execution dates have been set: Orlando Hall on November 19, Lisa Montgomery on December 8 and Brandon Bernard on December 10. Montgomery’s case is of special note, as she is the only woman on death row and would be the first executed by the US government since 1953.

Activist group Death Penalty Action has accumulated more than 3,600 signatures to a petition urging the Trump administration to stay Hall’s Thursday execution, which it delivered to the White House on Wednesday.

"The thousands of people who have signed this petition represent the millions who understand the death penalty is not necessary," Abraham Bonowitz, the director of Death Penalty Action, said in a release circulating with the petition. "We can be safe from dangerous individuals and hold them accountable to their crimes without executions. It's what we do in the vast majority of cases."

For 17 years, the US government carried out no executions, although the few remaining US states that have retained the death penalty have continued to execute those sentenced to death. Then, in July, amid the mass death of the COVID-19 pandemic, the Trump administration suddenly resumed performing capital punishment at the US Penitentiary in Terre Haute, Indiana.

Since July, the US federal government has executed seven inmates - as many as during the eight years of Harry Truman’s presidency - and if any more take place, they will match the number during the administration of US President Dwight D. Eisenhower. Those two presidents presided over the heyday of federal executions.

The seven executions under the Trump administration are already the most carried out by the government in any single year on record, according to Newsweek.

"President Trump is already the most-executing president since the 1950s, so he's got his record as the biggest and the best," Bonowitz noted in the release. "No further executions are necessary for him to hold his record."

However, for some, the rush to execute more inmates in the final months of Trump’s first term in office is connected to his likely departure from the White House in January 2021. While the results of the November 2020 presidential election have not yet been decided, Democratic presumed President-elect Joe Biden has taken a firm stance against capital punishment and promised to outlaw it if he becomes chief executive. Trump has filed lawsuits in several states contesting the ballot counts, alleging fraud.

“[The US Justice Department] is trying to rush through as many federal executions as possible during the ‘lame-duck’ period between now and January 20, 2021,” Sister Helen Prejean, a Roman Catholic sister and prominent death penalty abolitionist, wrote on Twitter Wednesday.

“DOJ lawyers have informed federal judges that more execution dates will be announced soon. This shameful killing spree must end.”

.@TheJusticeDept is trying to rush through as many federal executions as possible during the “lame-duck” period between now and January 20, 2021. DOJ lawyers have informed federal judges that more execution dates will be announced soon. This shameful killing spree must end.

​Actress Susan Sarandon has also spoken out against Montgomery’s execution, saying the court was denied essential evidence about her mental illness that should have a mitigating effect on the sentence.

Lisa Montgomery is set to be executed on Dec 8, but at trial the jury was never told about her horrific childhood of molestation, rapes, beatings & trafficking that caused severe mental illness. Help us stop her execution!

​Several Democratic lawmakers have also pressed the DoJ for a halting of executions. US Sens. Dick Durbin (D-IL), Patrick Leahy (D-VT) and Cory Booker (D-NJ), along with Rep. Ayanna Pressley (D-MA), sent a letter to Attorney General William Barr on November 13 urging that Biden and his running mate, Sen. Kamala Harris (D-CA), be given the chance to weigh in on the issue, assuming they take office.

“A record number of Americans voted in favor of President-Elect Biden and Vice-President Elect Harris and they deserve an opportunity to implement their policy agenda without the Trump Administration rushing to take preemptive and irreversible steps. While you will remain in office for a few more weeks, going forward with executions in the weeks before the new administration takes office would be a grave injustice.”