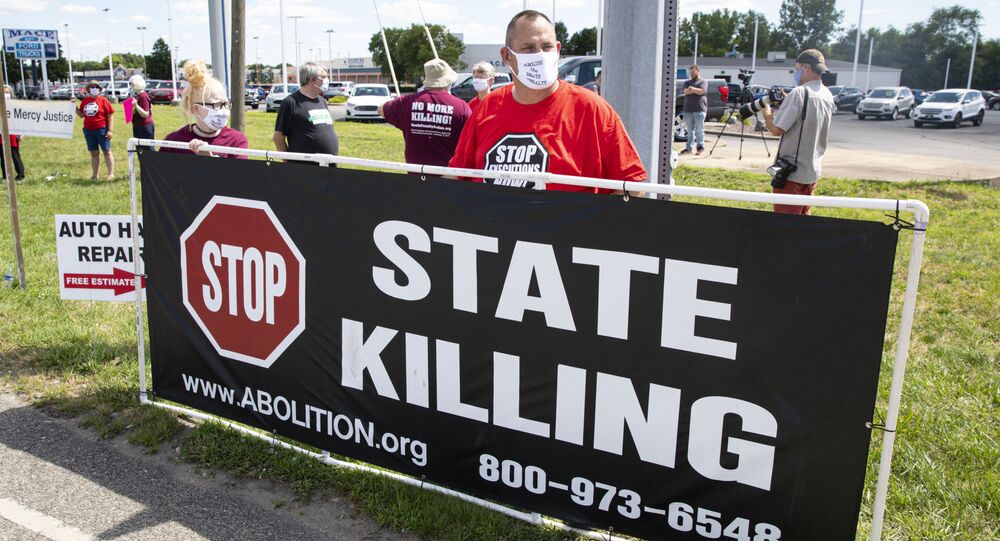 The US government’s attempts to resume the death penalty at the federal level after a 17-year hiatus – and efforts to stop it – have led to a chaos of last-minute litigation. Here’s a brief guide to the US laws on capital punishment and how they’ve changed over the years.

Lee, 37, was put to death by lethal injection at the federal prison complex in Terre Haute, Indiana for his role in the 1996 murder of a family of three.

The execution happened despite objections from the victim’s relatives and legal challenges brought by death row inmates.

The Justice Department has scheduled two other men to be put to death later this week and a fourth in August. All three are convicted of murdering children.

The US Court of Appeals on Monday sided with a district court, which issued an injunction just hours before Lee’s planned execution. The Supreme Court overturned the decision 5 to 4 early on Tuesday, giving a go-ahead for the move and for the execution of the other three inmates.

The majority opinion rejected the arguments by lower courts that pentobarbital, the drug used in lethal injections, carries a considerable risk of pain to inmates and that execution by this method violates the constitutional ban on cruel and unusual punishment.

What is the US law on death penalty?

The death penalty in the United States is used by the federal and state government, and also by the military. According to the Death Penalty Information Centre, it still exists in 28 states out of 50 and in all territories except for DC and Puerto Rico. State governors have enacted temporary moratoriums in California, Oregon, and Pennsylvania, where the practice has not been banned by courts.

Colorado this March became the latest state to legislatively abolish capital punishment; it was replaced with life imprisonment with no possibility for parole.

According to current legislation, death sentences may only be imposed for crimes in which a victim is killed. The last person put to death for a crime other than murder was James Coburn, electrocuted in Alabama in 1964.

The overwhelming majority of executions are carried out through lethal injection. A number of states also allow – but not as primary methods – electrocution, gas inhalation, hanging (only New Hampshire), and firing squad (Mississippi, Oklahoma, and Utah).

The federal death penalty applies even where there is a ban on state executions. Of 79 people who have been sentenced to death in federal cases since 1988, just three were executed, all by lethal injection, with Lee becoming the fourth.

The last federal death penalty was that of Louis Jones Jr, a 53-year-old Gulf War veteran who kidnapped, raped and murdered a 19-year-old female soldier. Two other federal inmates were put to death in 2001: terrorist Timothy McVeigh for his role in the Oklahoma City bombing, which killed 168 people, and drug trafficker Juan Raul Garza for murdering three other drug dealers.

How has the law changed over years?

Several states had abolished capital punishment in the 19th and 20th century, but it was only in 1972 that the Supreme Court weighed in on the issue. In Furman v. Georgia,  the court held 5 to 4 that the application of the death penalty in three cases was unconstitutional, in part due to what justices called racial bias against black defendants.

What became a four-year nationwide ban was imposed on all executions at state and federal level. Most states passed new death penalty statutes, and the court in 1976 allowed them to reinstate the punishment as it acknowledged progress made in jury guidelines across the nation.

The government only restored federal capital punishment in 1988. A 1994 federal law expanded the narrow group of crimes eligible for capital punishment to about 60 – these included espionage, treason, and non-homicidal drug-related offenses.

In the past two decades, US courts have issued a number of rulings that limited the scope of death penalty application, banning the punishment for mentally disabled inmates, offenders under the age of 18 at the time of the crime, and non-homicidal crimes including child rape (the last execution for non-homicidal rape took place in 1964).

President Barack Obama ordered a Justice Department review of the nationwide application of death penalty and issues surrounding lethal-injection drugs in 2014, following high-profile failed executions in Oklahoma and Ohio. That order placed federal executions on hold and was only challenged by Donald Trump in 2019.

The Supreme Court in December rejected a request by the Trump administration to proceed with plans to carry out the planned executions, so that the inmates could pursue their legal arguments in a federal appeals court.

Tuesday’s decision by the court paves the way for Trump’s Justice Department to proceed with other planned executions after justices dismissed the death row prisoners’ claims that the new lethal injection protocol containing a single drug, pentobarbital, would expose them to needless suffering.