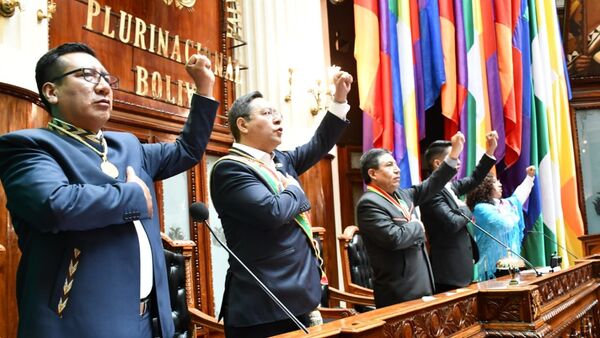 Demond Cureton
All materialsWrite to the author
Bolivians are tasked with numerous challenges after successfully voting out the former Jeanine Anez coup government, who seized control last year in elections contested by opposition forces. The nation has entered a period of restructuring and healing following major political crises in recent months.

SPUTNIK: Can you tell us about the current mood in Bolivia? How are people feeling after Luis Arce's electoral victory?

Miriam Amancay Colque: The Bolivian people have regained their hope or, as we call it, their Ajayu, or their 'soul'.

The victories of President Arce and Vice-president Choquehuanca mark those of the Bolivian people that, despite intimidation, persecution and massacres, defended democracy against racist, genocidal Jeanine Anez dictatorship.

Bolivians, in particular indigenous people, feel that their dignity and identity has been restored and are now placing faith in their new leadership.

Former president Evo Morales has also returned from exile in Argentina, back to his roots in Bolivia. Nearly 1m people welcomed him in El Chapare, and we are sure he will work positively with the new government.

SPUTNIK: How was the swearing in ceremony and how did people react?

Miriam Amancay Colque: The swearing-in ceremony for the President and Vice-President was inspiring. It took place on 8 November and was attended by global delegates and Bolivians. Social movements from across the country joined the parade to show support for the two officials, and the event was celebrated with music and dances for over eight hours.

There was widespread jubilation, with several thousands taking part in the event. A small opposition group protested the event but failed to dampen the celebrations.

Bolivians have shown the world that a humble but dignified and courageous people were able to break the chains of the former Anez dictatorship to reclaim their democracy.

SPUTNIK: What has become of the previous coup administration?

Miriam Amancay Colque: The former regime strongman who launched massacres across the country, Arturo Murillo Prijic, was the first to flee the country. Jeanine Anez is also believed to have fled Bolivia, and her collaborators have either renounced or left their posts.

Most of them will face justice for numerous crimes, including massacres, torture, imprisonment, corruption and others.

SPUTNIK: Have they accepted defeat or do you think they will attempt further coups in the country?

Miriam Amancay Colque: The opposition will always be on the lookout, but as long as Bolivians remained united and mobilised, it will be very difficult for them to violate the rule of law and its institutions again.

Those most affected by the attacks from the right-wing groups were always indigenous people who, after over 500 years, continue to struggle against oppressors and will continue to defend their rights.

Dignified and sovereign people rebelled and empowered themselves by speaking out against the Anez regime and emerged victorious.

But it should be known that the opposition never works alone. US organisations such as the National Endowment for Democracy (NED) funded the right-wing opposition with millions to destabilise left-wing governments.

Groups such as Rios de Pie (Standing Rivers) were camouflaged as an environmental non-governmental organisation (NGO) lead by Jhanisse Vaca Daza, an US-backed operative with experience in toppling progressive governments.

Daza also holds racist views and is now campaigning against President Arce in an attempt to divide Bolivians again.

SPUTNIK: How will the incoming administration deal with those responsible for crimes against humanity?

Miriam Amancay Colque: To bring peace we need justice, and all people involved in crimes against humanity must be tried and punished. Massacres took place against mostly indigenous people, leading to over 30 people killed and hundreds injured, and cannot go unpunished.

Judicial authorities in Bolivia will need to investigate and restore justice and peace to affected families, and President Arce has met with families in Senkata to listen to their testimonies.

We remembered the victims killed and injured in Ovejuyo, Pedregal, Rosales and Chasquipampa in southern La Paz City on 11 November, and victims of the Huayllani, Sacaba massacre last year were remembered on the 15th.

Many of them have been unable to seek justice, and our organisation sends our heartfelt solidarity to all those affected.

Despite the pain and trauma, it is important to seek justice for all victims and their relatives subjected to threats and mistreatment by security forces, including police and paramilitary groups as well as health professionals refusing to provide medical care to victims because they 'looked like Masistas', or indigenous people.

SPUTNIK According to Reuters, Arce promises "moderate" Socialism from the Bolivian people. What precisely does he mean by this and how would it work compared to socialism under Evo Morales?

Miriam Amancay Colque: Neoliberal policies have been imposed on Bolivia, leading to major poverty, unemployment and inequality, among others.

Capitalism is not the answer for these people there is a need to move to a system that works for the people rather than exploiting them, and that supports the majority rather than a few by redistributing wealth to the poorest and marginalised.

Arce's socialist views were formed when he was a member of the Socialist Party 1 (PS1) in the 80s. His party leader, Marcelo Quiroga Santa Cruz, was tortured, killed and disappeared by military dictator Luis Garcia Mesa in July 1980.

Bolivia to Restore Relations With Russia, President Arce Says
Although Arce is soft spoken, he is not much different politically from Morales. Both aim to improve the lives of Bolivians, redistribute wealth, industrialise the nation and others.

We also recognise that Morales is an undisputed and charismatic indigenous leader with a major place in history, and Arce is, after all, the architect of the miraculous economic policies that transformed Bolivia under Morales.

Arce's policies halved extreme poverty from 38 percent to 17 percent, reduced national debt and increased wealth by 5 percent each year. It is thanks to Arce that Bolivia has made such progress prior to the US backed coup. He is also a more pragmatic person and is well-qualified to rescue the nation from economic collapse and bring people together.

SPUTNIK: What are the most important challenges for the Arce administration?

Miriam Amancay Colque: President Arce has inherited a real challenge after the coup government left the country economically destroyed with state companies privatised and bankrupt, along with a -11 percent recession rate and unemployment tripled.

Jeanine Anez took power only to embezzle public funds with her collaborators, who never offered support to Bolivians left to their own devices in the COVID-19 pandemic.

Dead victims were found in the streets, in houses and other places, without medical assistance and abandoned by the state.

President Arce's top priority will be to tackle COVID-19 by providing full assistance to Bolivians. He recently stated he would rebuild the economy, boost domestic consumption and pledge financial support, and announced on 12 November a further Bonus Against Hunger to be paid in December to unemployed people over 18 years old.

The most pressing problems in the country will be economic and health issues. President Arce has said he would need to implement measures to boost the economy.

Personally, I think there should be no payments of foreign debt to the International Monetary Fund (IMF) until the economy is back on track and COVID-19 is suppressed.

The government should also continue industrialising national gas, lithium and other resources, and further advancements in social services should be implemented to inspire young, new leaders in the future.

SPUTNIK: What issues will they need to reverse from the former Anez coup government?

Miriam Amancay Colque: Measures will need to be implemented to reverse the damage of the Anez coup government, including boosting internal demand, renationalising strategic companies from foreign companies and backing state firms.

Education will need to be restored after the coup government shuttered schools for the year, leaving thousands of children without access to education.

The Arce government has reestablished the Culture and Decolonisation Ministry to continue to support the Bolivian people.

The Bolivian people are beginning to decide their own future for themselves.