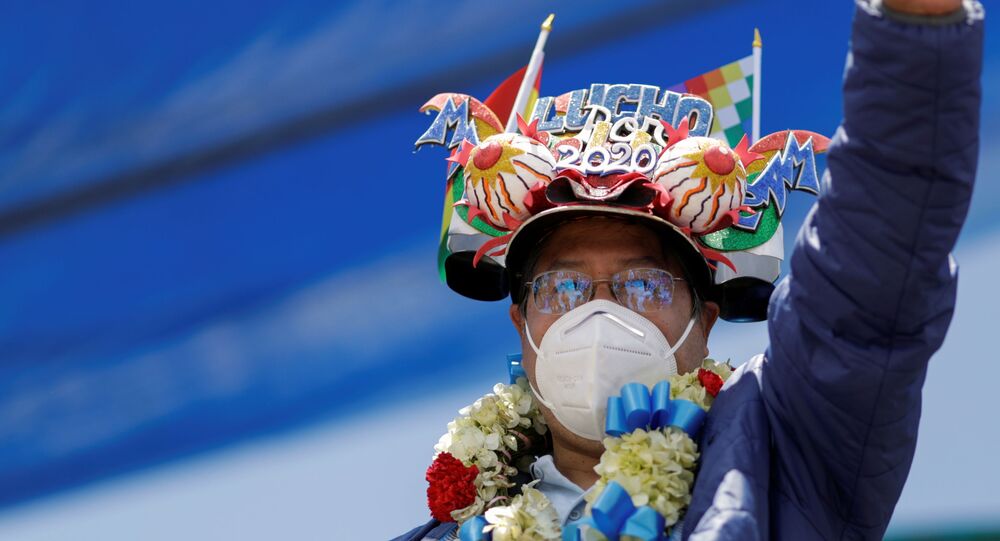 Despite formerly serving as foreign minister of his native Uruguay under president José Mujica, Luis Almagro has led the charge against governments in Latin America Since assuming leadership of the OAS in 2015.

Bolivia's newly-elected president, Luis Arce, has demanded the head of the Organisation of American States (OAS) resign over his role in the 2019 coup d'etat.

“We do not agree that an important body should be in the hands of people who support a particular political party or political trend in the region, and that it interferes in the internal affairs of a country," Arce said. "If it was able to do that in Bolivia, imagine, you could do it with any other country, and we can’t allow that.”

That included the shocking attack on Patricia Arce Guzman, the mayoress of the town of Vinto. Opposition rioters dragged her from the municipal offices before setting them on fire, then cut her hari, painted her face red and forced her to walk barefoot through the town as they spat and urinated on her. Arce Guzman was elected a senator last week.

​"There was no fraud, there was a whole preparation for a coup, of which the OAS was unfortunately a part," Arce told La Razón in reference to the audit, adding that Almagro “interfered, violated Bolivian regulations, and those of any international body observing an electoral process; he interfered in internal affairs.”

Other Latin American government officials  laid into Almagro this week.

Venezuelan UN envoy Samuel Moncada pointed out Almagro's dishonesty in claiming at the OAS General Assembly in Washington this week: "We told Evo Morales not to quit"

"Almagro has no shame, he represents the ideological, political and moral ruin of the OAS on the continent." Moncada wrote. "Never more will this kind of criminal be able to deceive our peoples!"

​Mexican undersecretary of foreign affairs Maximiliano Reyes Zúñiga accused Almagro on Tuesday of making “factious” use of the OAS electoral observer mission in 2019 to legitimise the opposition fraud claims.

And on Wednesday the Puebla Group, whose members include former presidents of Bolivia, Brazil, Ecuador, Uruguay and Spain, published an open letter urging Almagro to resign.

© AP Photo / ANDRES LARROVERE
Luis Arce Wins Bolivian Presidential Election With 55% of Votes After All Ballots Counted
Despite formerly serving as foreign minister of his native Uruguay under leftist president José Mujica, Almagro has led the charge against socialist governments in Latin America Since assuming leadership of the Washington-based OAS in 2015.

He has been a constant critic of Venezuelan President Nicolas Maduro and his government, even attacking the country's National Electoral Council after the opposition failed to gather enough signatories for a presidential recall referendum. In 2016 he invoked the Inter-American Democratic Charter against Caracas, claiming there had been "an alteration of the constitutional order" there.

In 2018 Almagro led efforts to bring Maduro and other Venezuelan leaders to trial at the International Criminal Court in The Hague. In 2019 he revived the doctrine of "Responsibility to Protect" - previously used to justify the 2003 invasion of Iraq - to urge other states to intervene in Venezuela.

Nicaragua's elected government has also been an occasional target for Almagro. In 2019 he sought to invoke the Democratic Charter against Daniel Ortega's Sandinista government.

Just this week at the OAS meeting in Washington, the secretary-general warned Managua the bloc would not recognise the result of next November's presidential election if it did not comply with a list of demands.

"Daniel Ortega will have to demonstrate how independent he is from the bad practices that Cuba and the Bolivarian regime [in Venezuela] instigate," Almagro said.

A group of 14 OAS members, led by the US, voted to expel Cuba from the bloc in January 1962. In response, revolutionary leader Fidel Castro dubbed the organisation the “Yankee Ministry of Colonies and a military bloc against the peoples of Latin America.”

Even after the OAS voted to allow Cuba to re-join in 2009, the island nation has consistently refused to do so.