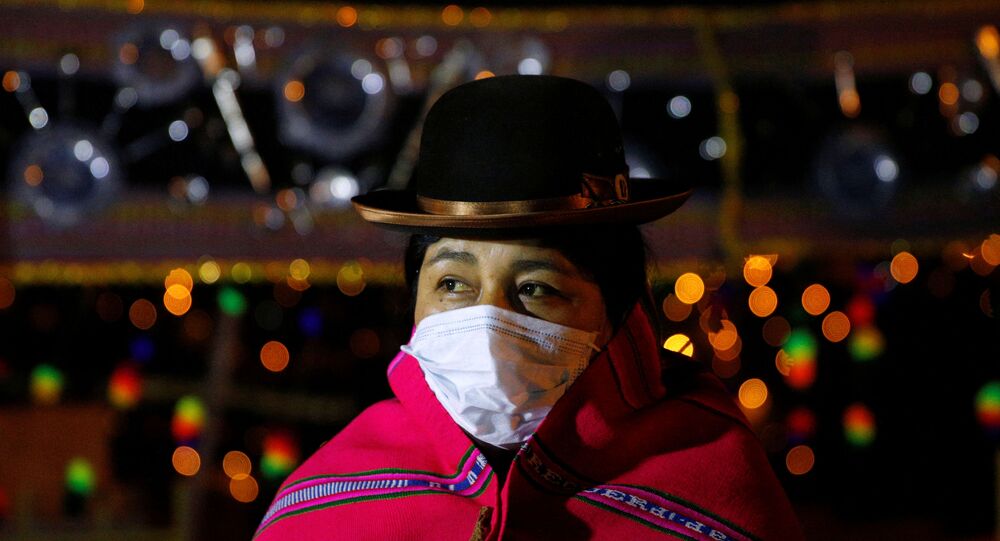 Indigenous Bolivians have joined mass protests to campaign for seven officials stranded at the Mexican Embassy in La Paz and fight the Jeanine Anez coup administration, with numerous resistance movements publicly denouncing the right-wing government while calling for a restoration of leadership under the Movement to Socialism (MAS).

Miriam Amancay Colque, spokeswoman for the Bartolina Sisa Resistance movement, discussed the role of women and indigenous people in fighting the ongoing coup government as well as further updates on the crisis in Bolivia.

Sputnik: How are grassroots movements like the Bartolina Sisa Resistance responding to the Campaign for Seven? Which actions will they take and how do they plan to confront the coup Bolivian government in this crisis?

Miriam Amancay Colque: We are having a very positive response. The rights of those seeking asylum and refuge should be respected as these are enshrined in the United Nations Universal Declaration of Human Rights.

We will continue building solidarity with grassroots movements and maintaining strong links with others as we recognise the need to remain united in confronting these attacks on our people.

We are also asking the trade union movement, UK Labour Party and others for their support. We continue to send letters to MPs, Government ministers and distribute information to publishers, websites and community organisations.

Bartolina Sisa Resistance
Protestors from numerous organisations hold banners and Whipala flags outside 10 Downing street to condemn the violence spreading across Bolivia following Evo Morales' asylum in Mexico
Under quarantine rules, we have had to adopt new methods to continue our solidarity work, organising meetings, and others, but will hopefully hold face-to-face events in the near future.

We also campaign to raise awareness of the current situation in Bolivia with these groups to denounce and repudiate the Jeanine Anez dictatorship as well as seek justice for all victims that were killed, injured, tortured and imprisoned.

Such women include Maria Eugenia Choque Quispe, former president for the Bolivian Supreme Electoral Tribunal, who was jailed in November on alleged charges of electoral fraud by the Anez regime, despite experts stating there was no fraud.

The dynamics of Bolivian politics have been changing every day, especially now that now that upcoming elections have been announced, so we will spend time discussing prospective candidates.

Sputnik: In your opinion, how have women shaped the ongoing movement to liberate Bolivia from the coup Jeanine Anez government?

Miriam Amancay Colque: The role of women, especially indigenous women, has been important throughout our history. Bartolina Sisa, one of our heroines, was a fighter against colonialism over 500 years ago. In the 1970s, five female miners stood up and challenged [former Bolivian military dictator] Hugo Banzer with hunger strikes until democracy was restored.

Women have been at the forefront of the Morales government and its achievements and have been protesting against the Anez coup government, despite obstacles from COVID-19, through strong social movements and their communities.

One of the most prominent women union organisations is the Bartolina Sisa National Confederation of Campesino, Indigenous and Native Women of Bolivia (CNMCIOB-BS), who were very vocal against the de facto regime, demanding them not to allow any US intervention in the country or police repression in the Tropico of Cochabamba.

© AP Photo / Juan Karita
No Pasaran? Bolivia Urged to Grant Safe Passage to Seven Morales Officials in Mexico Embassy - Judge
Despite living in a state of terror under the Anez government, these women resist along with their companeros, but also suffer the most because their children, husbands, brothers have been killed in the Massacres of Sacaba, Senkata and Yapacani by the army and police. The wounded still remain with significant consequences, abandoned by the State and stigmatized because everyone who is of indigenous ethnicity or dark-skinned is considered MASISTA (Morales supporter).

Remember that the seven former authorities are not the only ones affected. We have hundreds of political prisoners in jail, mainly indigenous people who were shot and wounded in the defence of democracy, indigenous women and our Whipala, imprisoned, tortured and falsely accused by the Anez regime.

Most of them lack legal support and the vast majority are abandoned. They are also our priority and we will start solidarity work for them because as grassroots companeros, they deserve much more help and support from us.

Sputnik: How has the allegedly 'conservative' Anez government, under a female president, disempowered local people and women through their actions?

Miriam Amancay Colque: Jeanine Anez does not represent the majority of Bolivian people and much less women. Remember, she illegally proclaimed herself president in a parliamentary session without a quorum, which is a coup d’etat.

She has done so much damage to Bolivia and its people in such a short time. She has brutally suppressed opposition, creating a deep and violent crisis, concentrated power in the hands of the wealthy and dismantled estate enterprises.

She has also opened the doors to the International Monetary Fund (IMF), Inter-American Development Bank (BID) and transnational companies to profit from our lithium and other natural resources, and has continued undoing almost everything achieved in the last 14 years.

Instead of protecting and providing for Bolivians, namely the poor and marginalised, she has cut funding for social welfare programmes and health system, with COVID-19 support left completely underfunded and collapsed. Unemployment and hunger has skyrocketed despite Anez enormous increases to budgets for the Armed Forces of Bolivia (FFAA) and police.

She is a champion of corruption, nepotism, human rights violation, attacks against press freedom, political persecution and many more. Her collaborators, some of them Croatian descendants, are the same, who think they are entitled to show white supremacy over indigenous people who are the majority in the country.

For example, Defence Minister Fernando Lopez threatened "to disappear people in 10 seconds". 'Minister of Death' Arturo Murillo has sent many people infected with COVID-19 to areas free of the disease, namely in indigenous communities. The abuse of power, disrespect, arrogance and humiliation is overwhelming.

Anez initially refused to approve an election date, citing COVID 19, but people mobilised and pushed back. On Sunday 21 June, during the Andean, Amazon and Chaco New Year, she agreed to 6 September as the date for upcoming elections.

But we will continue fighting for a better future for our people, who will vote for a new president and reinstate our democratic institutions. The nightmare of the dictatorship that has brought so much pain, mourning and suffering will never return to Bolivia or any other country.

This interview is dedicated to the memory of Silvia Lazarte, former Bartolina Sisa National Confederation of Campesino, Indigenous and Native Women of Bolivia executive and Constituent Assembly president, who died in Santa Cruz on Sunday as confirmed by MAS representatives.

An indigenous Quechua woman, politician and union activist who suffered racism and discrimination during the secessionist period in 2008, she played a key role in writing a state constitution in 2009, leading to the Plurinational State of Bolivia.