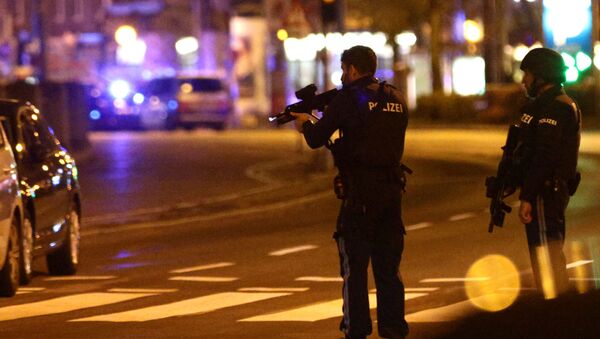 Ekaterina Blinova
All materialsWrite to the author
On 2 November, a number of gunmen went on a shooting spree in six locations throughout Austria's capital Vienna, killing five and injuring at least 17 more. International observers have explained the difference between this and last week's attacks in Nice and discussed the problem of Islamic radicalisation in Europe.

The gruesome attack began near Vienna's main synagogue, Seitenstettengasse Temple, at around 7pm (GMT) on 2 November, just hours before new coronavirus restrictions took effect in the country. One of the gunmen was shot dead by the police and two were reportedly arrested.

"It was a serious terrorist attack the like of which we have not seen for many years. Four civilians have been killed, one criminal killed, it took nine minutes to neutralise a heavily armed criminal," said Austrian Interior Minister Karl Nehammer on Tuesday.

The Vienna shooting followed hot on the heels of a stabbing attack in Nice, France, on 29 October.

"The response to the gunman is typical", says Dr Binoy Kampmark, senior lecturer from RMIT University in Melbourne. "The 'trigger' for radicalised conduct is always what authorities struggle to understand, which makes it impossible to conduct a pre-emptive arrest. The lone wolf terrorist principle, however flawed it is, suggests that such a figure will be inspired to undertake an act of martyrdom in the name of religion to pursue a goal. The problem is, when to apprehend the individual?"

Though the Vienna assault also has all the hallmarks of an Islamist-inspired terror act, it is not a "lone wolf"-style attack, as were the attacks that took place in France in October, as Ali Rizk, a political analyst specialising in Middle Eastern affairs, emphasises.

"The terrorist attack in Vienna clearly was a co-ordinated attack as there were crime scenes in six different locations with multiple gunmen participating," Rizk says. "[It] resembles those which took place in Paris in 2015, Brussels in 2016, and Mumbai in 2008 – in that there were multiple perpetrators in different locations".

Rizk does not rule out that Daesh* could be somehow linked to the Vienna attacks as the police found evidence that one of the perpetrators sympathised with the terrorist organisation. At the same time, the Austrian interior minister made reference to "at least one Islamist terrorist". In addition to this, the participation of several gunmen "also fits in with the terrorist attacks [Daesh] perpetrated in Paris and Brussels, in that multiple perpetrators were involved", the Middle East expert adds.

"It appears at this stage to be a planned attack", says James O'Neill, an Australia-based barrister at law and geopolitical analyst. "The perpetrators are assumed to be Muslim radicals, but at this time that is unconfirmed. Similarly, no group has as yet claimed responsibility so far as I am aware".

The Austrian authorities revealed that the attacker shot dead by the police was a 20-year-old with dual Macedonian and Austrian citizenship who had a criminal record related to terrorist activity. According to Nehammer, the assailant wore a fake explosive belt and was armed with an automatic rifle, a handgun, and a machete. As German newspaper Bild reported on Tuesday, the culprit earlier announced the attack on Instagram and pledged allegiance to Daesh leader Abdullah Qardash. 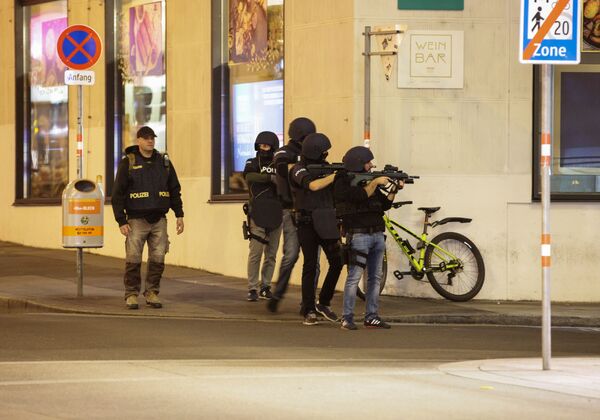 Police officers aim their weapons on the corner of a street after exchanges of gunfire in Vienna, Austria November 2, 2020
© REUTERS / LISI NIESNER

Is Europe Changing Its Approach to Islamic Terror?

In the wake of the attack the Austrian authorities have tightened security measures across the country and the Viennese police have warned locals against using public places and public transport on Twitter.

"The imposition of further security measures converges with the imposition of coronavirus lockdown measures", says Binoy Kampmark. "It is clear that European governments will be revisiting approaches taken to instances of radicalised Islamist attacks previously associated with Daesh and Al Qaeda*, notably in instances such as the Charlie Hebdo massacre in 2015".

There appears to be a shift in the attitude towards the Islamist problem among European governments as they seemingly move "to the right", the academic suggests. Citing Emmanuel Macron, Kampmark notes that the French president "is returning to the idea of seeing Islam as 'a religion that is in crisis today all over the world', a point he made in 2016 two weeks before the truck attack in Nice".

"Macron's model of coping with the current round of attacks is to focus on combating 'Islamic separatism', which targets foreign-trained imams from heading French mosques and prohibits home-schooling for all children aged three and up", the lecturer points out. "Macron wishes for 'an Islam in France that can be compatible with the Enlightenment.'  This is a view that is gaining support in Europe".

On 2 October, Macron criticised "foreign influences" within the French Muslim community and rolled out his strategy to fight "radicalisation". He stepped up his attack against "radical Islamism" after French teacher Samuel Paty was beheaded by a radicalised teenager of Chechen origin for showing his pupils Charlie Hebdo cartoons of the Islamic prophet Muhammad.

Thus, on 20 October, the French government announced that the "Cheikh Yassine Collective" would be dissolved because of its apparent involvement in the attack on Paty. The government specified that the group "had long advocated an anti-republican ideology which spreads hatred" adding that "other dissolutions will be announced in the coming weeks".

Predominantly Muslim countries took offence at Macron's rhetoric and moves and called for a boycott of French goods. 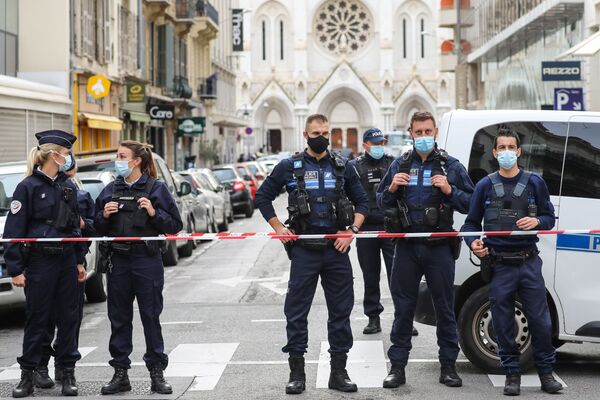 Police block the access to the Notre-Dame de l'Assomption Basilica in Nice on 29 October 2020, after a knife-wielding man kills three people at the church, slitting the throat of at least one of them, in what officials are treating as the latest jihadist attack to rock the country. (Photo by Valery HACHE / AFP)
© AFP 2022 / Valery Hache

Will Terror Attacks be Critical to Europe’s Ties With Muslim Countries?

"The tensions are only going to be exacerbated but not more than has already been seen", Kampmark suggests, referring to the European countries and Muslim communities.

"There will be very heady and violent rhetoric but nothing necessarily to influence the relationship between EU states and Islamic states as they stand. There is unlikely to be any escalation in relations we have not already witnessed before", he says, adding that arms deals and trade deals between the EU and Middle East countries are still being done.

Nevertheless, the problems of radicalisation are not going anywhere in the foreseeable future, according to the academic.

European countries will continue to suffer from Islamist extremism as many citizens from these countries headed to Syria to fight with Daesh before returning - some are expected to be released from jail soon, notes Rizk.

The roots of the problem originate in policies the US and its allied European countries have been conducting for almost two decades, argues James O'Neill. Ordinary Muslims have also fallen prey to radicalised elements after NATO invasions which created a fertile soil for the emergence of Islamist forces, he says citing the 19-year long Afghanistan War and the US-led operations in Iraq, Syria and Libya. "The solution to the problem is not easy to identify and even less easy to carry out", he believes.

*Daesh (ISIS/ISIL) and al-Qaeda are terrorist organisations banned in Russia and many other countries.