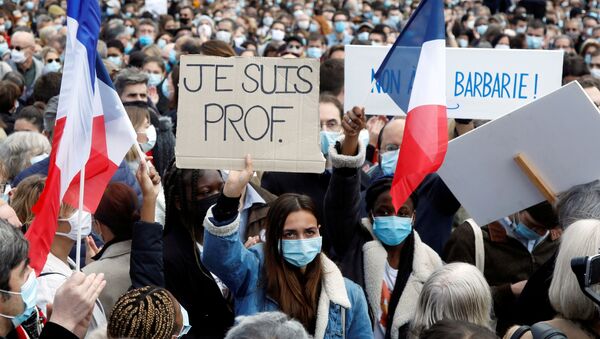 Svetlana Ekimenko
All materialsWrite to the author
French President Emmanuel Macron held a defense council meeting in the wake of the brutal attack on a history teacher in a Paris suburb, vowing that “Islamists will not sleep peacefully in France”, with probes to be conducted of the authors of 80 posts on social media that expressed support for the attacker.

French officials have announced a sweeping crackdown on radicalised foreigners in response to the brutal beheading of a teacher on Friday that the French president Emmanuel Macron called an "Islamist terrorist attack", reported Fox News.

In line with measures planned by Minister of the Interior Gerald Darmanin, authorities intend to expel 231 foreigners that have been red-flagged in the File of Alerts for the Prevention of Terrorist Attacks (FSPRT), which tracks suspected radicalised activities, reports the outlet, citing Europe 1.

According to officials, the names on the list include some 180 individuals who are behind bars at the moment, as well as another 51 people who may soon be arrested.

Overall, more than 850 illegal immigrants are registered with the FSPRT, says the outlet.

Darmanin had reportedly been mulling the deportation earlier, intending to offer deals to officials in Algeria, Tunisia and Morocco to take back their radicalised nationals.

The issue of the right to asylum is also reportedly to be addressed by the Minister of the Interior, with appropriate services tasked with scrutinising more carefully those individuals who seek to obtain refugee status in France. 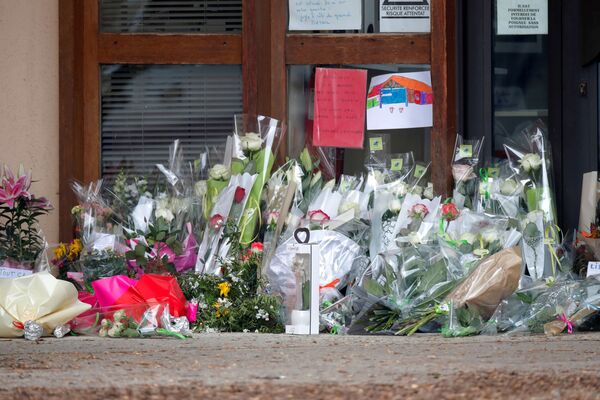 Flowers at the Bois d'Aulne college are seen after the attack in the Paris suburb of Conflans St Honorine, France, October 17, 2020.
© REUTERS / CHARLES PLATIAU

The developments come as an 18-year-old Chechen refugee, identified as Abdoulakh A., is the main suspect in a murder that shocked France on Friday.

History teacher Samuel Paty, 47, was attacked and decapitated by an 18-year-old refugee of Chechen origin.

Paty had earlier shown a caricature of the Islamic prophet Muhammad to his students at a school in Conflans-Sainte-Honorine, northwest of Paris, during a lesson on freedom of speech.

11 individuals have already been detained in connection with the attack, according to French media reports, including four members of the attacker’s family. 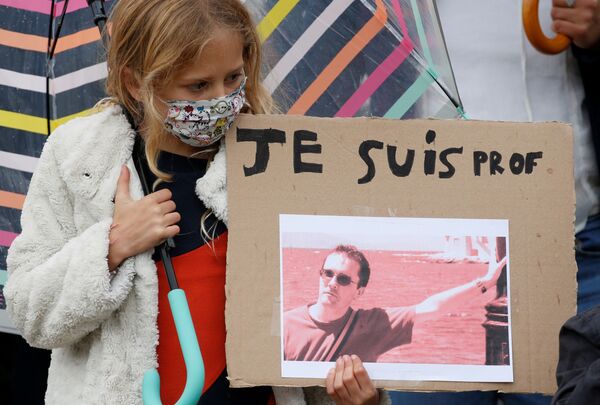 A girl holds a banner with a picture of Samuel Paty, the French teacher who was beheaded on the streets of the Paris suburb of Conflans St Honorine, during a tribute at the Place de la Republique, in Lille, France, October 18, 2020. REUTERS/Pascal Rossignol NO RESALES. NO ARCHIVES.
© REUTERS / PASCAL ROSSIGNOL

French media added that among the six people arrested on Saturday were the father of a pupil at the school, and a reportedly ‘radical Islamist’ preacher. It is not clear if these individuals are also part of the planned deportations.

After the suspect in the murder was discovered not far from the victim, carrying a knife that he refused to drop, police shot and killed him.

According to French media reports citing the country’s anti-terrorism prosecutor Jean-Francois Ricard, a text claiming responsibility for the attack and a photograph of Paty were found on the suspect’s phone.

A Twitter account that is believed to have belonged to the suspect contained a post with a photo of the victim’s decapitated head and a message that reportedly said:

“I have executed one of the dogs from hell who dared to put Mohammad down.”

On Sunday, political leaders, associations and unions demonstrated in Paris and other major cities to call for support of freedom of speech and pay tribute to Paty, who had been the target of online threats for showing the cartoons.

The father of one schoolgirl is reported to have launched an online call for "mobilisation" against him, said France's anti-terror prosecutor Jean-Francois Ricard.

According to Ricard, the perpetrator, who was of Chechen origin, was born in Moscow in 2002, and had received refugee status in France.

A spokesperson for the Russian Embassy in France, Sergey Parinov, said on Saturday that the suspect had resided in France with his family on a legal basis since 2008.

​While a national tribute will be paid to Samuel Paty on Wednesday, demonstrations are being held in dozens of cities across France in a show of solidarity and defiance.

Thousands of people rally in Paris and other French cities today - in a show of solidarity and defiance after French teacher Samuel Paty was killed, in Montpellier, France
📸@GettyImages pic.twitter.com/9sfkjuv2BG

“A civilisation does not kill an innocent person, barbarism does,” Tareq Oubrou, imam of a mosque in Bordeaux, was cited as telling France Inter on Saturday.