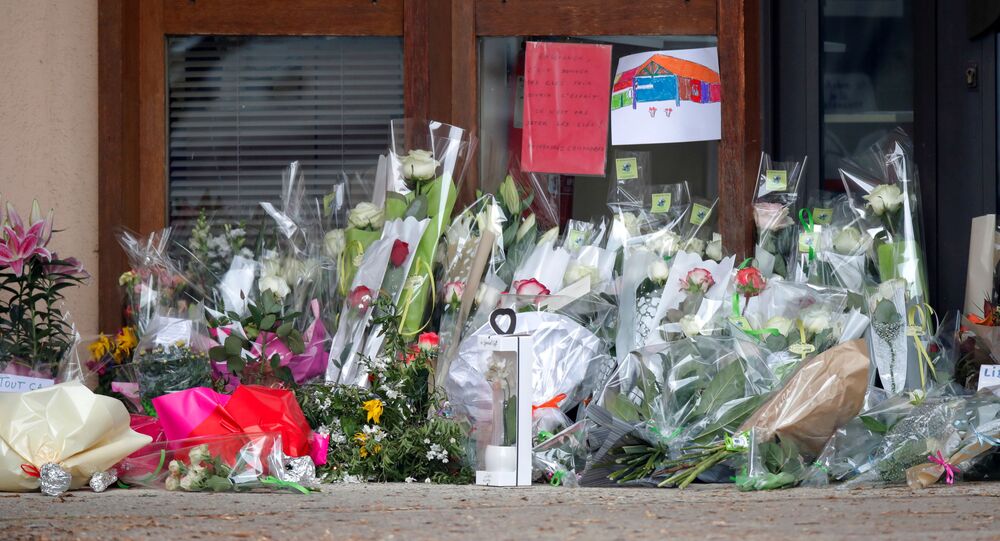 "Islamists will not sleep peacefully in France. Fear will switch sides," Macron said at the meeting, held late on Sunday.

According to BFMTV, starting Monday, checks will be conducted of the authors of 80 posts on social media that express support for the attacker.

© REUTERS / CHARLES PLATIAU
EU Foreign Policy Chief Says Shocked by Beheading of French Teacher
On Sunday, thousands of people demonstrated across France in solidarity with the French teacher who was decapitated outside a school near Paris. On Saturday, hundreds of people laid white roses at the school.

On Friday night, a history teacher, later identified as Samuel Paty, 47, was attacked and decapitated by an 18-year-old refugee of Chechen origin. The attack came after Paty showed a caricature of the Islamic prophet Muhammad to his students at a school in Conflans-Sainte-Honorine, northwest of Paris.

The killer, identified as Abdullakh Anzorov, was shot dead by French police shortly after the attack.

According to French media reports, 11 people, including four members of the attacker’s family, have been detained as part of the ongoing investigation.

© REUTERS / Gonzalo Fuentes
French Police Shoot Man Who Allegedly Beheaded Teacher That Showed Prophet Muhammad Cartoon to Class
The spokesperson for the Russian Embassy in France, Sergey Parinov, told Sputnik on Saturday that the suspect had lived in France with his family on a legal basis since 2008. The attacker himself received a residence permit upon reaching the age of 18, according to Parinov.

According to France’s anti-terrorism prosecutor Jean-Francois Ricard, the suspect was born in Moscow in 2002, was of Chechen origin, and had received refugee status in France.

Chechen leader Ramzan Kadyrov has condemned the attack on the French teacher, urging French investigators on Saturday not to seek a "Chechen trace" in the attack, and stressing that the attacker had spent most of his life and was likely radicalized in France.