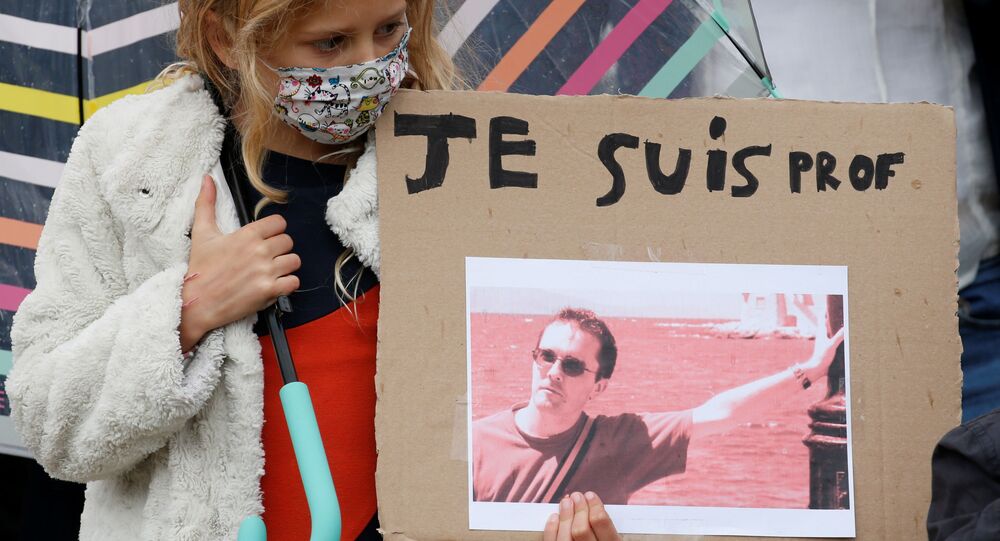 Reports surfaced on 16 October that a teacher who had taught freedom of speech and showed cartoons depicting the Islamic prophet Muhammad to his students had been decapitated in the north-west suburbs of Paris, and that police chased down and fatally shot the main suspect, a Moscow-born Chechen teenager.

A Tunisian MP is being investigated for allegedly attempting to justify the decapitation of a French teacher in a gruesome terror attack this week, reports DW.

The independent MP Rached Khiari's remarks made on social media, as well as his position in parliament would be probed, according to the Public Prosecutor's Office in the capital Tunis, cited by state news agency Tap.

History teacher Samuel Paty, 47, was beheaded on Friday afternoon in the suburb of  Conflans-Sainte-Honorine, about 30km northwest of Paris.

Paty had conducted a class on freedom of speech in which he showed cartoons of the Muslim Prophet Muhammad.

French police subsequently shot dead the alleged suspect in the beheading, an 18-year-old born in Moscow and originating from Chechnya, the predominantly Muslim Russian republic, some 600 metres away from the scene, Le Figaro reported, citing an unnamed judicial source.

The suspect, revealed to be Abdoullakh A., was believed to be part of a criminal gang in the neighbouring Éragny commune.

The attacker reportedly filmed the deed and uploaded it on Twitter.

An investigation is underway, with law enforcement officers reportedly detaining nine people in connection with the case, including the family of the suspect.

Khiari went on Facebook to claim that to “insult the messenger of God" was "the greatest crime". He added that anyone who committed such an action would have to “bear its consequences".

After an investigation had been launched into the crime, Khiari posted on Facebook claiming that although he could renounce his immunity to prosecution, he would not “renounce my conviction for the crime".

The MP, who won a seat in parliament representing a right-wing religious movement in the 2019 elections before becoming an independent MP, added:

“The prophet is more important and greater than fame, parliament, politics and the whole world."

In line with Islamic tradition, any images depicting the religion's prophets are strictly banned.

The politician’s outburst triggered a whole range of opinions: Deputy Public Prosecutor and spokesman for the Court of First Instance of Tunis, Mohsen Dali, said that Khiari's comments could be classified as a terrorist crime.

Anti-terrorism law in Tunisia prohibits any acts that openly praise and glorify crimes, with those in breach facing up to five years in jail.