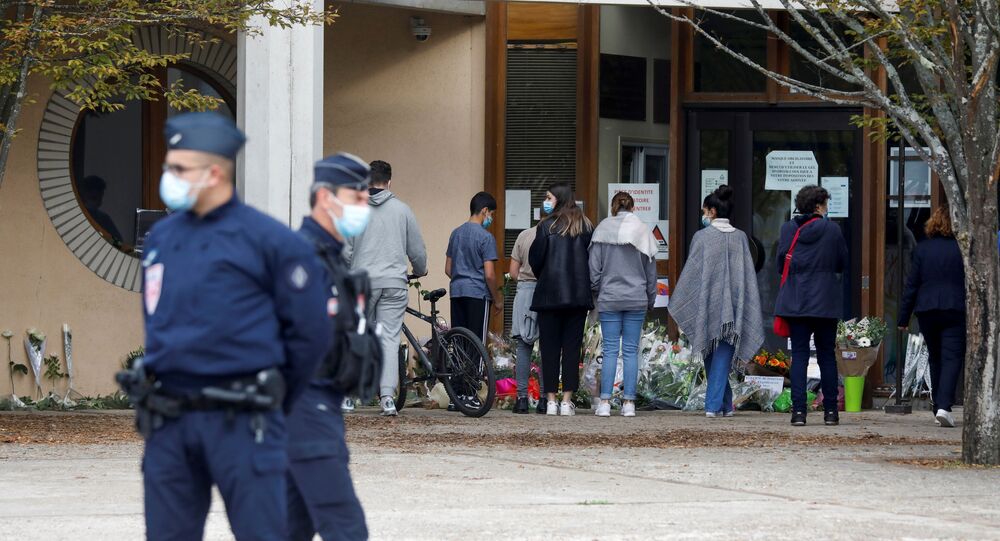 Paris Suburb Decapitation: Suspect Was Born in Moscow, But Officially Lived in France for 12 Years

French President Emmanuel Macron has described the murder as an "Islamist terrorist attack", saying the teacher, who taught history and geography at the College du Bois d’Aulne was killed because he "taught freedom of expression".

The Russian Embassy in France has said that an 18-year-old man of Chechen origin, who beheaded a school teacher in a Paris suburb on Friday, had nothing to do with Russia as his family had moved to France in 2008, where it has lived ever since. The statement comes as the French anti-terrorist prosecutor confirmed that the attacker was born in Moscow in 2002.

"The neutralised person ... Abdulak Abuezidovich A. was born on 12 March 2002 in Moscow", said Jean-Francois Ricard.

Ricard noted that one of the people detained in connection with the brutal attack has a half-sister, who was a member of the Daesh* terrorist group.

According to Ricard, the perpetrator had approached pupils near the school where the attack later occurred and asked them to point out his victim.

After killing and beheading the man, the assailant posted a photograph of his victim on Twitter, said the prosecutor. The post was accompanied by a message saying he was responsible for the murder. Ricard confirmed that 9 people had been detained as part of the investigation into Friday's attack.

What is known about the murder?

The attack occurred on 16 October at 5 p.m. local time near the school where the victim, 47-year-old Samuel Paty, worked. Earlier this month, Paty had started teaching his class about freedom of expression. He purportedly showed his students caricatures of the Prophet Muhammad printed in the French satirical magazine Charlie Hebdo in 2015.

The Quran, Islam's holy book doesn't bar depictions of Muhammed, yet most Muslims have long opposed human portrayal of the prophet because it may lead to temptation toward idol worship. Some Muslims even consider satire of Islam or of its religious representatives to be blasphemy, which in Islam in some cases is punishable by death.

Charlie Hebdo's decision to publish caricatures of the Prophet Muhammad in 2015 sparked indignation across the Muslim world and resulted in a series of Islamist attacks in France that left 17 people dead and dozens more injured.

As mentioned earlier, Samuel Paty showed his students these caricatures and spoke about the Charlie Hebdo case. According to French newspaper Le Monde, some Muslim parents complained to the school's authorities about the teacher and one reportedly called for his sacking on social media.

The anti-terrorist prosecutor said that prior to the attack, the school and the teacher received multiple threats, and Paty had filed a complaint for defamation.

Police arrived at the scene shortly after the perpetrator killed the teacher. After the attacker threatened law enforcement and tried to flee police officers shot him. He later died from his injuries.

French President Emmanuel Macron, who arrived at the scene on Friday, described the murder as an "Islamist terror attack". Speaking about the victim, he said Samuel Paty was killed because he taught his students freedom of speech and freedom of expression. Macron also underscored the importance of national unity.