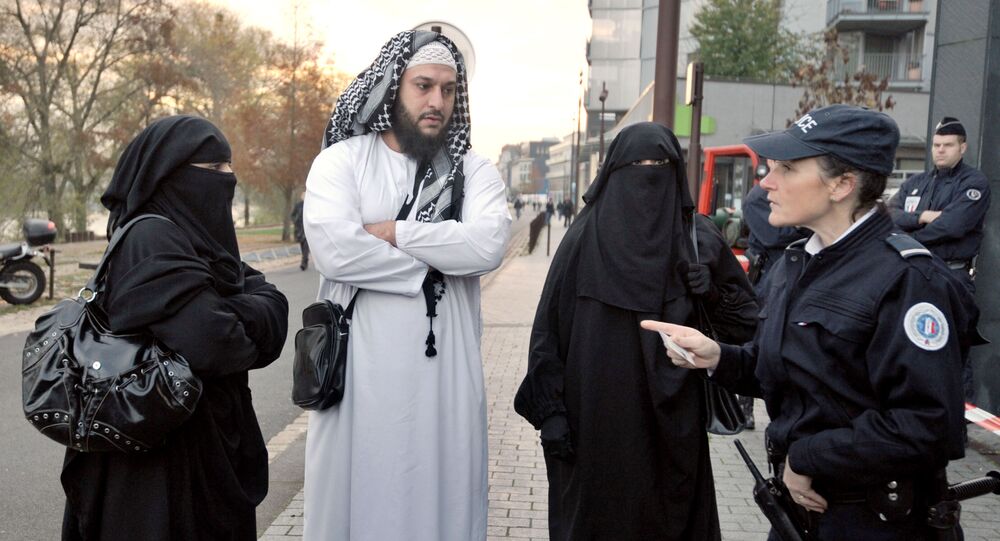 MOSCOW (Sputnik) - French President Emmanuel Macron on Friday detailed the government’s proposed bill to fight manifestations of radical Islamism in the country, tightening control over the foreign influence on Islam and funding for mosques, and promoting the domestic training of imams.

"The ambition to train and promote in France a generation of imams and intellectuals who defend Islam [that is] fully compatible with the values of the republic is a necessity", Macron told a press conference in the Mureaux commune in the Ile-de-France region.

The bill will include intensified control over schools. Starting in 2021, homeschooling will be strictly limited in line with health reasons. The measure comes amid numerous closures of unregistered educational structures promoting radicalism, the president said.

Macron also said the bill would imply the mandatory rule of neutrality for employees of public service companies that they must follow while performing their work to avoid manifestations of separatism.

In addition, the bill will provide more grounds for dissolving associations in which manifestations like the "attack on dignity of a person" or "psychological or physical pressure" are detected, Macron said.

"Any association applying for a grant from the state or local authority must sign a contract respecting the values of the republic. If the contract is broken, its officials will have to repay", he indicated.

The cabinet will consider the bill on 9 December, Macron said, adding that it is to be presented by French Interior Minister Gerald Darmanin. It is expected to go to parliament in the first half of 2021.

The president stressed that secularism is one of the main principles of France that must not be violated. At the same time, he said, there was no place for stigmatisation of Muslims, given their religious demeanour does not undermine the republic’s secular values.

"We must face with great determination and strength the radical forms in the short term, we must win back everything that the republic allowed to do, which pushed the youth to be attracted by this radical Islam", Macron said.

He noted that, once passed, the bill will strengthen the 1905 French law on the Separation of the Churches and State that set up state secularism in the country.

The president’s long-awaited speech follows the recent beginning of a trial on 14 suspects allegedly having assisted the terrorists in the January 2015 Paris attacks, including the massacre in the Charlie Hebdo’s editorial office, and the recent terrorist attack not far from there by a man who wounded several people to avenge the republication of cartoons depicting the Prophet Mohammed by the satirical magazine.