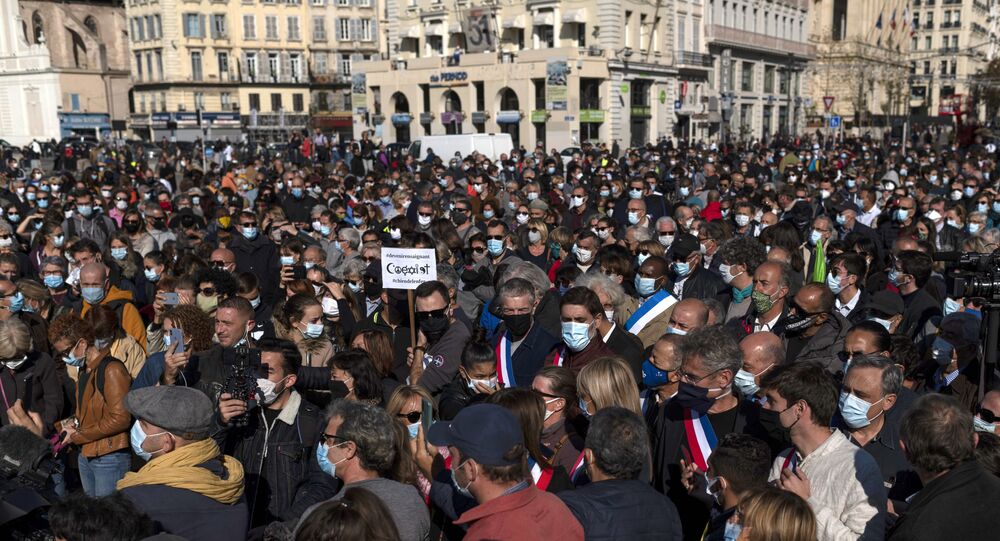 The attacker had been armed with a knife, an airgun and five canisters. He had fired shots at police and tried to stab them as they closed in on him. He was in turn shot nine times. Locals in the Normandy town of Evreux where the attacker lived in the Madeleine district described him as low key.

Demonstrations are being held in dozens of cities across France in a show of solidarity and defiance after the decapitation of a teacher outside his school on Friday for showing pupils cartoons of the Prophet Mohammed in a lesson on freedom of speech.

The beheading of history teacher Samuel Paty in a Paris suburb on Friday has sparked outrage in France and memories of a wave of Islamist violence in 2015 sparked by caricatures of the Prophet Mohammed published by the satirical magazine Charlie Hebdo.

"It is absolutely important to show our mobilisation and our solidarity, our national cohesion," education minister Jean-Michel Blanquer told France 2, calling on "everyone (to) support the teachers".

A large gathering is taking place in the Place de la République in Paris, attended by members of the government, including Blanquer, Prime Minister, Jean Castex, and the Minister Delegate for Citizenship, Marlène Schiappa.

​Meanwhile the hashtaq #Je Suis Prof "I am a teacher" has been trending on social media. This was reminiscent of the hashtag Je Suis Charlie launched after journalists from the satirical magazine Charlie Hebdo were murdered in January 2015 for publishing cartoons lampooning the Prophet Muhammad.

Paty had been the target of online threats for showing the cartoons, with the father of one schoolgirl launching an online call for "mobilisation" against him, France's anti-terror prosecutor Jean-Francois Ricard said.

The 18-year old suspect, named as Abdullakh A, was shot dead by police shortly after the attack.

The schoolgirl's father and a known Islamist militant are among 11 people arrested in connection with the attack.

​Ricard said the school had received threats after the class in early October, with the girl's father accusing Paty of disseminating "pornography".

The father named Paty and gave the school's address in a social media post just days before the beheading, which French President Emmanuel Macron has called an Islamist terror attack.

Friday's attack was the second such incident since a trial started last month into the January 2015 massacre at the offices of Charlie Hebdo.

The magazine republished the cartoons in the run-up to the trial, and last month a young Pakistani man wounded two people with a meat cleaver outside the magazine's former office.

Ricard said Paty's murder illustrated "the very high-level terrorist threat" France still faces but added that the attacker himself was not known to French intelligence services.

The President of the Ile De France region, which includes Paris, called for a ban on Muslim groups that refused to condemn the murder of Paty.

​On Saturday, hundreds of pupils, teachers and parents went to Paty's school to lay white roses as a tribute to the dead teacher.

Macron's office said a national tribute would be held for Paty on 21 October.