'Lord, Why Did You Make Me so Stupid?': Cardi B Comments on Leaking Topless Photo on Instagram 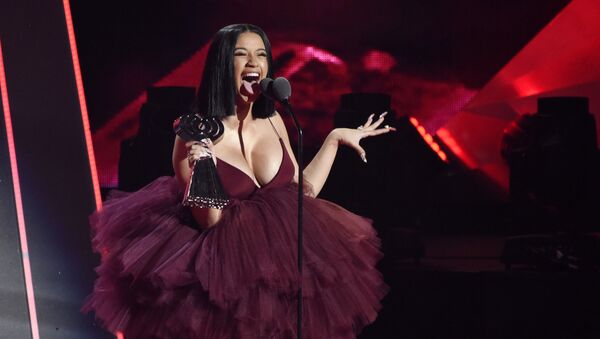 © AP Photo / Invision/Chris Pizzello
Subscribe
Max Gorbachev
All materialsWrite to the author
The 28-year-old, who is an avid supporter of Joe Biden, is no stranger to finding herself in controversial situations. Recently, the singer was criticised for speaking about the Nagorno-Karabakh conflict between Armenia and Azerbaijan.

Cardi B has commented on accidentally posting a topless photo of herself on Instagram. Taking to social media, the singer said she had intended to send a nude photo of herself to her soon-to-be-ex-husband, the rapper Offset, in order to show him her bruised lip, but accidentally uploaded the image to social media. When she realised what had happened, she turned off her cell phone hoping that the picture wouldn’t upload to Instagram, but apparently Murphy’s Law went into effect and the image not only uploaded to the social media app, but was shared with Cardi B’s 76.7 million followers.

The 28-year-old also posted a voice message on Twitter saying that she wouldn’t even "think about" the awkward mishap.

"Lord, why the f**k did you have to make me so f**king stupid and retarded? I’m not even gonna beat myself up about it. I’m just gonna eat my breakfast and then I’m gonna go to a party. Because I’m not even gonna think about it. I am not going to think about it, okay? Nope. I won’t, it is what it is, s**t happens. F**k it, it’s not even the first time [this happens]. I used to f**king be a stripper so whatever", Cardi B said in the voice message.

The singer, whose real name is Belcalis Marlenis Almanzar, is no stranger to finding herself in controversial situations. Last month, the singer, who is a harsh critic of Donald Trump and a supporter of Democrat Joe Biden, was sued by a group of people for defamation and civil rights violations. The plaintiffs claim that Cardi B and her sister approached the group and started insulting, spitting on, and assaulting them because one of the individuals was wearing a MAGA hat.

Recently, the singer was criticised for weighing in on the Nagorno-Karabakh conflict between Armenia and Azerbaijan after she posted a link to promote a fundraiser for Armenia, which prompted angry reactions from Azeris. After the rapper deleted the post, many Armenians criticised her for withdrawing her support for them. Cardi B later posted a statement apologising for not doing enough research on the issue. "I just want peace", the singer tweeted.