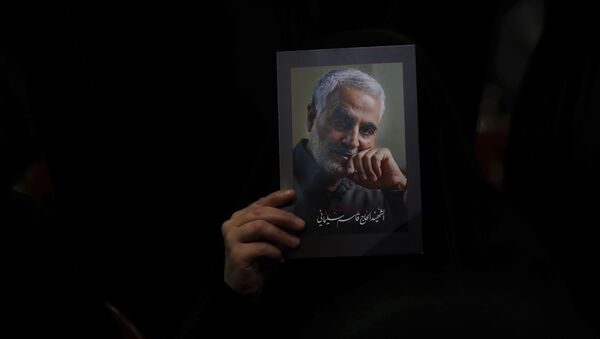 Oleg Burunov
All materialsWrite to the author
On Sunday, the US news outlet Politico asserted that Tehran may retaliate following January’s killing of a top Iranian general by targeting American ambassador to South Africa Lana Marks.

Iranian Foreign Ministry spokesman Saeed Khatibzadeh has dismissed allegations that Tehran is weighing the possibility of carrying out an assassination plot as revenge for the US killing of top Iranian General Qasem Soleimani earlier this year.

The claims were recently made by the news outlet Politico, which cited unnamed American sources as saying that the target could be the US ambassador to South Africa.

“We advise the American officials to stop resorting to hackneyed and worn-out methods for anti-Iran propaganda in the international arena,” Khatibzadeh said in a statement on Monday.

He described the allegations as part of the “Trump administration’s counter-intelligence campaign against Iran”, slamming the Politico report as “custom-ordered, biased and purposeful”.

The spokesman stressed that it was “predictable” that Washington would “resort to anti-Iran accusations and falsification ahead of the US presidential election, coupled with that [American] regime’s pressures to abuse the United Nations Security Council’s mechanisms with the purpose of intensifying pressure on the people of Iran”.

He suggested that such a news fabrication would “possibly continue in the future” but would “undoubtedly get nowhere”, adding to “the long list of Washington’s continuous defeats in the face of the Islamic Republic of Iran”.

Khatibzadeh also touted his country as “a responsible member of the international community”, which he said “proved its constant commitment to international diplomatic principles and norms”.

“Conversely, it is the United States and the incumbent regime at the White House that has ignored the basic diplomatic principles and has become a rogue regime in the international arena, […]  masterminding and implementing tens of assassination plots, […]  withdrawal from many international agreements, violating the territorial integrity of nations, and the cowardly assassination of General Qassem Soleimani, the honourable commander of the fight against terrorism,” the spokesman underscored.

IRGC Official Reveals Why No US General Was Killed by Iran in Response to Soleimani's Murder
He pledged that Iran will “press on with international legal action at all levels in connection with the criminal” assassination of General Soleimani, and that it will neither forgive nor forget the act of terrorism”.

Politico's sources have, meanwhile, said that they were not in the know as to why US Ambassador to South Africa Lana Marks would be considered by Tehran as a target, since she has "few, if any, known links to Iran". It was suggested that she would be an easier target than other US diplomats.

Qasem Soleimani, head of Iran's Islamic Revolutionary Guard Corps (IRGC)'s elite Quds Force and senior Iraqi militia commander Abu Mahdi al-Muhandis were killed in a US drone strike on their car at Baghdad International Airport on 3 January, in an attack that was authorised by President Donald Trump.

Iran retaliated by launching air strikes against two Iraqi military bases housing US troops. The strikes caused no deaths or serious injuries, but the Pentagon has since reported that at least 109 US servicemen have been diagnosed with traumatic brain injuries.

Soleimani’s assassination exacerbated already-tense relations between Tehran and Washington, which have persisted since May 2018, when President Trump announced the unilateral exit of the US from the 2015 Iran nuclear deal, also known as the Joint Comprehensive Plan of Action (JCPOA), while also reinstating harsh economic sanctions against Tehran.