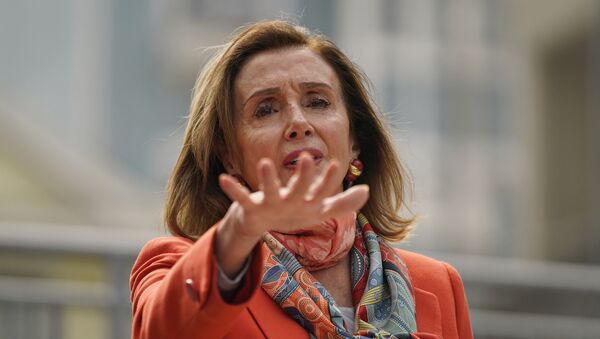 © AP Photo / Eric Risberg
Subscribe
Svetlana Ekimenko
All materialsWrite to the author
House Speaker, Democrat Nancy Pelosi stirred up a scandal after she was caught on video in San Francisco supposedly getting her hair washed and blow-dried despite regulations that prohibited hair salons from providing indoor services amid the COVID-19 pandemic and by not wearing a mask in public.

Nancy Pelosi's hair stylist came to her defense on Wednesday amid the recent controversy surrounding the House Speaker’s visit to a hair salon in San Francisco during restrictions stemming from the coronavirus pandemic, writes the Daily Mail.

Jonathan DeNardo, a San Francisco cosmetologist who did Nancy Pelosi's hair prior to the city allowing salons to operate indoors, claimed in a statement through his lawyer that the salon owner Erica Kious had deliberately set the Democrat up by authorizing the controversial hair appointment.

“The fact that Ms. Kious is now objecting to Speaker Pelosi's presence at eSalon, and from a simple surface-level review of Ms. Kious' political leanings, it appears Ms. Kious is furthering a set-up of Speaker Pelosi for her own vain aspirations,” the statement is cited as saying.

The statement also deplored the fact that DeNardo's name was now being “dragged through the mud” although he was simply following the recommendations of the salon owner.

DeNardo also accused the salon owner of breaching coronavirus restrictions and operating during the pandemic-induced stay-at-home orders as far back as in April, claiming to have proof of this in the form of photographs, videos and witness information.

The statement by the stylist echoes the earlier claims made on Wednesday by Speaker Pelosi that she had been “set up” by the salon that owes her an apology.

Nothing to see here just Nancy Pelosi walking into a closed hair salon on Monday without a mask and violating local ordinances keeping salons closed for COVID-19.
pic.twitter.com/MCvQLeo5HJ

​The statement by DeNardo confirms he provided stylist services to Nancy Pelosi at eSalon on 31 August after salon owner Erica Kious had granted permission for the appointment.

The statement also suggested that the salon owner had displayed particular interest in the appointment during the afore-mentioned telephone call. Kious is said to have made several incendiary comments about the house Speaker and her alleged responsibility for temporarily suspending operations the salon’s operations.

In effect, says the statement, the orders had been put in place by Governor Gavin Newsome and San Francisco Mayor London Breed.

The owner of the eSalon in San Francisco dismissed all accusations of setting the Democrat up.

Erica Kious, the owner of the e Salon SF, was quoted by Fox News as alleging she had received death threats in the wake of exposing the House Speaker's visit.

“[Pelosi] had called the stylist, or her assistant did, and had made the appointment so the appointment was already booked so there was no way I could have set that up. And I've had a camera system in there for five years, I mean I didn't go in there and turn cameras on as soon as she walked in and set her up so that's absolutely false,” said Kious.

The scandal erupted because San Francisco beauty parlors weren't supposed to open until 1 September, the day after the speaker’s controversial visit to the salon, where she supposedly also breached the California Department of Public Health requirements that face masks to be worn in public indoor places.

New restrictions in San Francisco allow hair salons to operate outdoors, but certain procedures - such as shampooing, color and chemical treatments - are still not allowed.

Nancy Pelosi held a press conference in San Francisco on Wednesday to fend off criticism in the wake of her controversial visit after a report by Fox News.

“It was a set up, and I take responsibility for falling for a setup,” she said.

The salon's security footage that seemed to show Nancy Pelosi inside without a mask had gone viral on social media, with many weighing in to comment on the Democrat’s believed breach of pandemic guidelines.

000000
Popular comments
Someone tell Nancy that I will be putting the Brooklyn Bridge up for sale. What a dimwit.
Rokenbok
3 September 2020, 16:15 GMT2
000000
all involved are guilty,but that decrepit oligarch pelosi should be hung out to dry