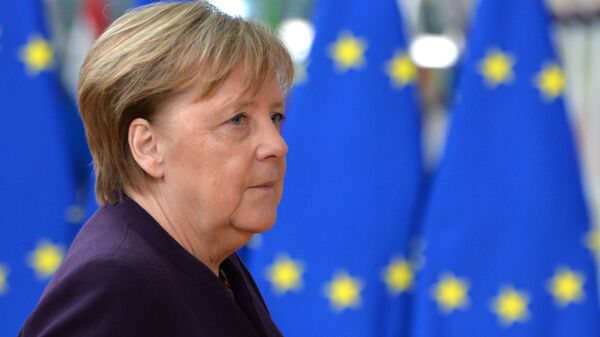 Earlier Wednesday, a German government spokesman alleged that test results showed that Russian opposition figure Alexei Navalny, who was rushed to Germany from Siberia last month after becoming ill and falling into a coma, was poisoned by a nerve agent of the so-called 'Novichok' group.

Germany is treating the Navalny case as an "attempted murder by poisoning," and is waiting for Russia to explain its position and provide answers, Chancellor Angela Merkel announced Wednesday.

Speaking to reporters shortly after Berlin's announcement that a toxicology test had shown 'undeniably' that Navalny had been poisoned by "a chemical nerve agent of the Novichok group," Merkel said that there are now "very serious questions that only the Russian government can answer and must answer."

Merkel confirmed that the Russian ambassador to Germany had been informed about the test results, and said that "we now expect that the Russian government wlil make a declaration on this incident."

Calling the information about Navalny's alleged poisioning "depressing," Merkel added that her government would consult with its NATO allies and Germany's European Union partners on how to respond.

"We will inform our partners in the EU and NATO on the results of the test. We will have a joint discussion...and make a decision on a proportionate [response] in a joint statement," the chancellor said.

Kremlin spokesman Dmitry Peskov responded to the German government's new allegations later Wednesday, saying that no traces of any poisonous substances were found in Navalny's system before his transfer to Germany.

The Russian Foreign Ministry issued a separate statment, saying its diplomatic mission in Berlin hadn't received any information or documents regarding Navalny, and accused Germany of making 'loud statements' without any evidence to back them up.

The ministry added that it made sense for Germany to appeal to the EU and NATO if its main goal was to substitute "some pre-prepared 'response measures'" for normal cooperation.

Navalny was flown to Germany from a hospital in Omsk, Russia, where he was hospitalized on August 20 after falling into a coma during a Moscow-bound flight from Tomsk. The politician and blogger, arguably the best-known Russian opposition figure in the West, was transfered to Berlin aboard a chartered jet on August 22 for further treatment, and granted the status of 'chancellor's guest' by Merkel, ostensibly 'for protection'.

Navalny's spokesperson began speculating that he may have been poisoned almost immediately after he fell ill. However, doctors in Omsk said no traces of poison were present in the blood and urine samples they had taken. Later, doctors postulated that Navalny may have a metabolic condition which caused a severe drop in his bloodsugar levels and led him to lose consciousness and go into a coma. Navalny reportedly didn't eat or drink before boarding the flight or on the plane, apart from tea purchased for him at the cafe in Tomsk's airport.