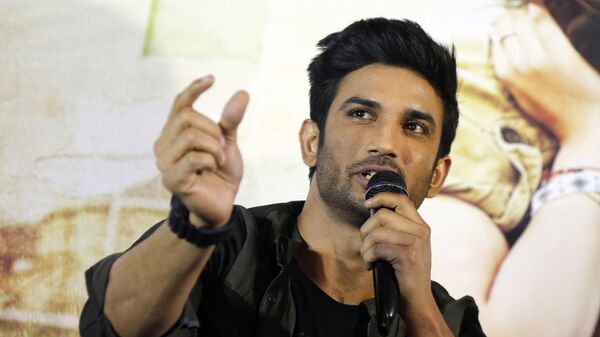 New Delhi (Sputnik): Bollywood actress Rhea Chakraborty has come under fire since the death of her boyfriend Sushant Singh Rajput, an Indian actor who is believed to have committed suicide last month. Rhea has been facing constant trolling, as well as death and rape threats, from fans of Sushant, who suspect foul play.

Late Bollywood actor Sushant Singh’s father has registered a formal complaint against Rhea Chakraborty for allegedly extorting money from his son and instigating him to commit suicide.

A First Information Report (FIR) has been lodged in Sushant's hometown in Patna, Bihar by his father K.K. Singh.

Besides Rhea, five others are named in the FIR.

Case filed against Rhea and her family under section 306 for abetment to suicide..also section 340 and 342.#CBICantBeDeniedForSSR

This comes a day after Mumbai Police received a viscera report of the late Bollywood actor, ruling out foul play in his death. The police cited that the post-mortem showed death by asphyxia due to hanging, adding that no foul play or external injury marks were found.

The Mumbai Police started the investigation into the case soon after the death of the actor. Several actors, directors, and producers from the film community have been interrogated in the case.

Rhea, director Sanjay Leela Bhansali, director Mahesh Bhatt, and Dharma Productions CEO Apoorva Mehta have been interrogated in the case by Mumbai Police in relation to the case, including 40 others.

On 14 June, Bollywood actor Sushant Singh Rajput died after committing suicide in his posh penthouse in the suburbs of Mumbai city. The 34-year-old actor's dramatic passing left India grieving and mourning. The cause of his suicide, though unverified, was widely believed to be linked to depression.

Sushant, who kicked off his career with a TV series, ventured into Bollywood with his successful film Kai Po Che, based on the book by Chetan Bhagat. The star gradually shot to fame with films like Dhoni - The Untold Story, Shuddh Desi Romance, Kedarnath, and Chhichhore.