Portland Mayor Tells Trump to Keep Fed Troops in His 'Own Buildings, or Have Them Leave Our City' 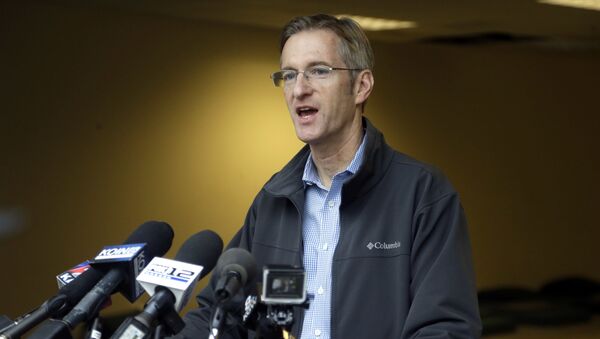 Muhammad Osman
All materialsWrite to the author
Portland has been dealing with ongoing protests and riots since the 25 May death of African American George Floyd while in police custody. President Donald Trump sent federal law enforcement to quell the demonstrations taking over the city, saying, "It was out of control. The locals couldn’t handle it".

Ted Wheeler, mayor of the city of Portland, on Friday urged US President Donald Trump to withdraw federal law enforcement personnel from different components of the Department of Homeland Security and the US Marshals Service deployed in the city to quell the ongoing wave of protests and riots.

The mayor told Trump to keep the federal agents in his "own buildings", claiming that sending in the troops was a "strategy" used by the president in order to "bolster his sagging polling data".

Wheeler’s remarks came as federal agents have used a "heavy-hand" against demonstrators and reporters in Portland, with some refusing to identify themselves and not wearing name tags, according to Fox News.

"Keep your troops in your own buildings, or have them leave our city", Wheeler said during a news conference on Friday. "This is part of the core media strategy out of Trump's White House: to use federal troops to bolster his sagging polling data. And it is an absolute abuse of federal law enforcement officials".

Earlier in the day, the American Civil Liberties Union (ACLU) of Oregon filed a lawsuit against the Department of Homeland Security and the US Marshals Service over the use of extensive force against protesters, journalists, and legal observers by federal troops from these agencies deployed in Portland.

"What is happening in Portland is an unconstitutional nightmare", Vera Eidelman, a staff attorney with the ACLU’s Speech, Privacy and Technology Project, said in a statement, as cited by Fox News. "This is not law and order. This is lawlessness. The ACLU will not let the government respond to protests against police brutality with still more brutality. We will continue to hold law enforcement at all levels of government accountable, just as we have nationwide".

Last week, federal law enforcement forces were sent to some US cities, including Portland and Seattle on President Trump's orders.

In response, Oregon Governor Kate Brown slammed Trump, accusing him of using the power of the federal government to distract Americans from the resurgence of the coronavirus pandemic in the country.

​Portland City Commissioner Jo Ann Hardesty also criticised the actions of the federal officers over the weekend, saying that police violence was unacceptable in any form.