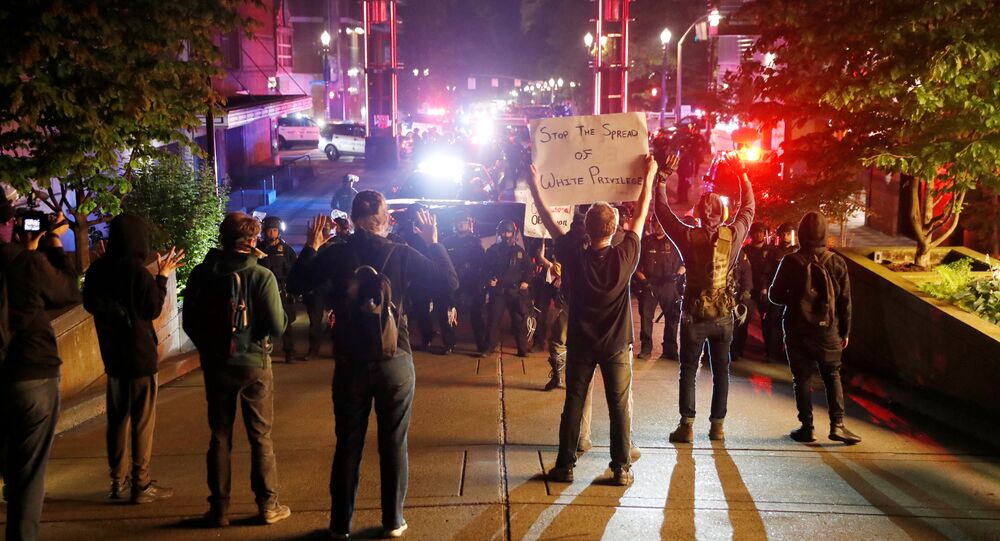 MOSCOW (Sputnik) - Violent riots erupted on Saturday night in the US city of Portland amid ongoing protests against racism and police brutality sparked by George Floyd's death in police custody in May, with federal law enforcement officers deployed in the city using tear gas and crowd control munitions.

The riots started on Saturday after a group of protesters gathered near Hatfield United States Courthouse downtown while federal officers were inside the building. Local media reported that the officers exited to reportedly chase a man who used chalk to graffiti the sidewalk in front of the building. As a result, one protester was seriously injured in the head when officers fired munitions to disperse the crowd.

Oregon Public Broadcasting reported that Donavan LaBella, 26, was shot while holding a speaker over his head with both hands. After several shots, the man collapsed, dropping the speaker on the ground. LaBella was sent to a hospital for some facial reconstruction surgery and, according to his mother, is now out of danger.

The Portland Police Bureau (PPB) confirmed later in a statement that they were aware of arrests made by federal law enforcement officers in the area, and the latter had requested PPB help in curbing riots.

"At about 2:00am Portland Police officers responded when federal officers called for help because people were resisting arrest and people in the crowd were throwing bottles at federal officers near SW Main and SW 3rd. The Portland Police made public address announcements to leave and that the area between SW Naito to SW Broadway and SW Columbia to SW Harvey Milk was closed due to criminal activity," the statement reads.

"The events of last night at the federal courthouse were the tragic and avoidable result of President Donald Trump, for weeks, continuing to push for force and violence in response to protests," Brown said, as quoted by The Seattle Times.

​Portland City Commissioner Jo Ann Hardesty also criticized the actions of the federal officers over the weekend, saying that police violence was unacceptable in any form.

​Earlier in July, Portland saw riots during the Independence Day weekend protests against police violence, when over a dozen people were arrested amid the clashes. Moreover, in June, several people were injured in Portland when a vehicle struck a crowd of demonstrators.

The death of African American man George Floyd in police custody on May 25 has sparked ongoing protests against police brutality throughout the United States. Some protests have turned into riots complete with violence against police and civilians, as well as acts of vandalism, arson and looting.