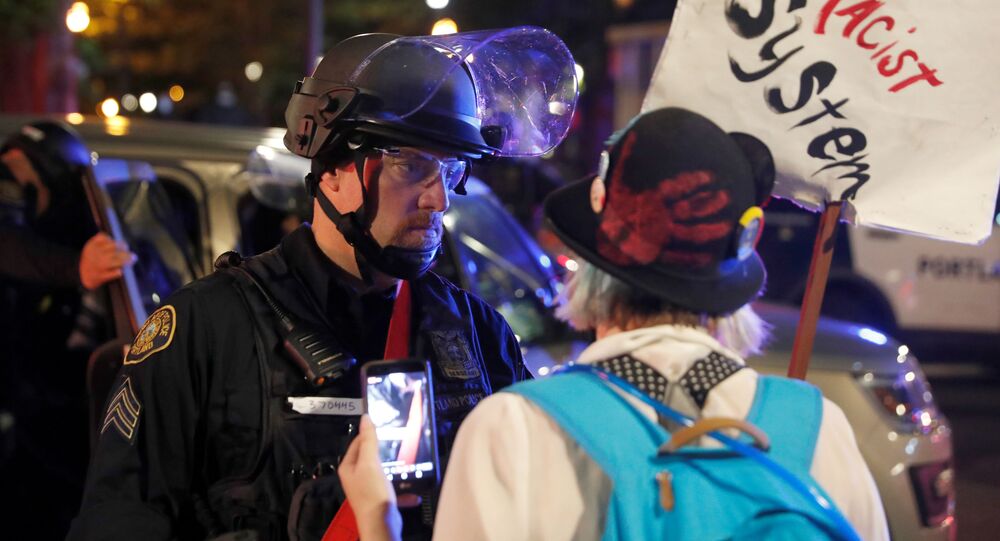 WASHINGTON (Sputnik) - Over a dozen people were arrested in Portland, Oregon, after Independence Day demonstrations that turned violent, the city police said in a statement.

"Thirteen adult subjects were arrested and booked, and two adult subjects were arrested and cited," Portland police said in an updated statement on Sunday, adding that the "individuals were booked into the Multnomah County Detention Center from the demonstration that began the evening of July 4, 2020, and continued into the morning of July 5, 2020."

According to Portland police, demonstrators burned an American flag, shot fireworks at the Justice Center and the Federal Courthouse, with several windows thus being broken and fireworks and projectiles entering the courthouse building.

"As officers dispersed the crowd, demonstrators threw bricks, mortars, M-80s, and other flammables towards them. To defend themselves from serious injury, officers used crowd control munitions and tear gas at this time. Lasers were directed at Officer's eyes, which is unlawful," a police statement said.

Numerous people were seriously injured when a vehicle crashed during the riot in North Portland, according to law enforcement officers. Protesters lit fires, smashed windows and targeted officers with projectiles.

"Several Officers sustained injuries throughout the night, mostly due to mortars and fireworks thrown at them by members of the crowd, which exploded on or near them," Portland police said.

The city police declared the protests a riot twice during the Independence Day weekend in Portland. Saturday was the 38th straight day of protests in the city since the death of George Floyd. In June, several people were injured in Portland when a vehicle struck a crowd of demonstrators.

On Saturday, protesters burned a US flag near the White House after US President Donald Trump’s Independence Day address, in which he promised to defeat the radical left, the anarchists and looters and stand against "an angry mob" that was trying to trample on Americans’ freedoms.