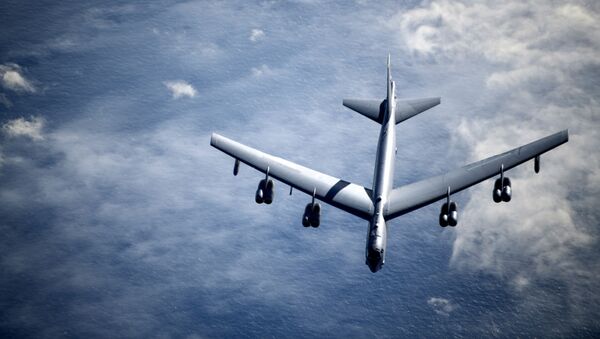 © Tech. Sgt. Emerson Nuñez
Subscribe
While pundits have noted the US returning to its traditional deterrence methods, its bomber routes now include countries previously seen as neutral, such as Sweden, which are increasingly drawn into cooperation with the Western military bloc.

US military activity is now being rolled out more rapidly than the Russians', with US bombers and warplanes increasingly frequently cruising higher latitudes, the Norwegian broadcaster NRK reported, suggesting that the US is “tightening its grip over the High North”.

According to the broadcaster, US bombers used to be rare guests in Norwegian airspace, but this is rapidly changing. Sweden, which declared itself neutral over a hundred years ago, is experiencing the same.

“Recently we saw US bombers cruising over Sweden and Norway. The fact that the modern strategic bomber B-1B Lancer is flying over previously neutral Sweden is brand new. We have not seen that before,” military adviser Per Erik Solli at Northern University in Bodø told NRK.

The flight in question took place about a month ago. Two US B-1 supersonic bombers based in Ellsworth, South Dakota flew over Sweden accompanied by Swedish jets. After a refuelling, they continued over Norway and were flanked by Norwegian F-35 fighter jets over Trøndelag County.

Since 20 May, several other US bombers, including B-52s and B-2s appeared near Norway, accompanied by US tankers and often Norwegian fighter jets.

“The exercises strengthen the partnership with our allies, and demonstrate our ability to respond worldwide, from anywhere,” Jeffrey Harrigian, Commander-in-Chief of the United States Air Force in Europe said.

Norwegian Defence Minister Frank Bakke-Jensen ventured that NATO has “in many ways returned to its old mission of deterrence and reassurance”, calling it “a desired policy”. According to him, the inclusion of Sweden into this cooperation reflects an understanding of the fact that a war or crisis would affect all the Nordic countries.

According to military adviser Per Erik Solli, Russian military activity, which is often listed as the reason for NATO's defence measures, has been “more consistent” than that of the Allies in recent years.

“The Russians have been more consistent in their military activity in the north in recent years than NATO. We have seen bombers from the US and the Allies in the northern areas in the past, but the no increase in volume has occurred until the past year,” Per Erik Solli said.

The Norwegian defence said they have no record of how often allied aircraft appear in Norwegian aerospace, which makes it difficult to exactly evaluate the increase.

“If we compare activity over the last couple of years, US and Allied activity is increasing faster than Russia's,” Solli said.

According to Solli, however, the US is “showing its teeth” not only against Russia. The US is building up in other border areas as well, such as the Baltic States, Alaska, the Pacific and Asia in general.

“What we see now, which is also new, is that the Americans have begun to use their modern naval ships and bombers to send geopolitical signals. The fact that Sweden is also involved in this signalling together with the US is a whole new development. We see that the US is returning to a more traditional deterrence. And in addition to balancing militarily against Russia, the Americans are doing the same to China now,” Solli said.

Labour leader Jonas Gahr Støre, who during his tenure as a foreign minister about a decade ago, expressed concern that NATO didn't pay enough attention to Russia's northern areas, now appears to have changed his tune.

“We must never get into a situation where other states are pushing up the level of tension in our proximity without us being involved. It is in Norway's interest to ensure low voltage. There is every reason to pay attention,” Jonas Gahr Støre said.

Earlier, several Norwegian parties, including the Socialist Left and the Reds expressed their concern about increasing superpower tensions between Russia and the US, which, according to them, could compromise Norwegian security.

In recent years, bilateral Russian-Norwegian relations have been marred by reciprocal spying accusations. Norway is increasingly disturbed by the upgrade of the Russian military in the North, which it sees as self-assertive, whereas Russia is alarmed by Norway's increased cooperation with the US and its NATO allies. This features, among others, the upgrade of the polar radars in Vardø and a rotating deployment of US marines, which Moscow sees as a provocation.