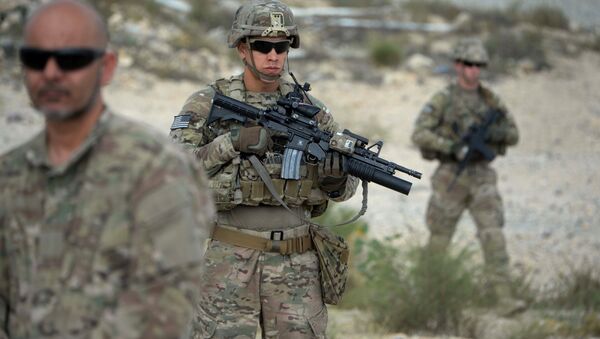 © AFP 2023 / Noorullah Shirzada
Subscribe
International
India
Africa
The "Russian bounty" story continues to grow despite being supported by only a handful of unnamed sources and no credible evidence to back the claims. International observers have commented on the recent developments, with many suggesting that mainstream media in the US keeps disgracing itself.

On Tuesday, The New York Times claimed that unnamed American officials intercepted electronic data indicating "large financial transfers from a bank account controlled by Russia’s military intelligence agency to a Taliban-linked account", suggesting that the alleged transaction partly confirms its story of Russia providing bounties to the Taliban to kill US troops. The newspaper insisted that US President Donald Trump was briefed on the issue as early as February 2020. The Daily Beast went further, alleging that the Russians started funding the terrorist group under the administration of US President Barack Obama. The assumption was based on comments by ex-Taliban leader Mullah Manan Niazi, whose account of events has been denied by present Taliban operatives, who call him an "enemy" and add that he has been "playing into the hands" of the US National Directorate of Security (NDS).

The new details cited by western mainstream media prompted no jitters among the Pentagon, the White House or intelligence leadership, who declined to comment on the issue, referring to their Monday statements and calling the recent news reports about Afghanistan "unsubstantiated".

On 1 July, Trump again rejected allegations that he was previously briefed on the matter: "I was never briefed because any info that they may have had did not rise to that level", he tweeted.

​The major problem with the "Russia bounty" story is that sources quoted by news outlets are either anonymous or carry little credibility, according to Umer Karim, a visiting fellow at the Royal United Services Institute.

"The main characters at the heart of both NYT and Daily Beast reports are quite dubious characters", says Karim. "One is a person who has been known for his prominence in various criminal enterprises and other is a Taliban dissident and secondly the 'Afghan government officials told us' component of these reports remains quite dubious".

The researcher highlights that no matter how hard western mainstream media tries to push the story, he fails to see "any comprehensive and well elaborated connections between Taliban engagement with Russia and their attacks on US troops".

"The Taliban had to attack the US troops for their very own tactical reasons and didn't develop a special interest into US troops just because Russia paid them", he emphasises. "So this part remains illogical. That's why the story is not having and will not have any effect on the US broader strategy within Afghanistan".

Richard Vatz, distinguished professor at Towson University, draws observes that the NYT story is largely based on unnamed sources, though previously the newspaper used anonymous sources "only hesitatingly".

According to him, Nytimes.com, "a once-highly credible source for foreign news, has become an anti-Trump organ that has violated once sacrosanct principles of journalism for the purpose of keeping its bona fides in the Resistance movement".

"The initial New York Times' charge that President Trump was offered a conclusion with a briefing by unnamed 'American officials' to the effect that a Russian military intelligence unit 'offered and paid bounties to Taliban-linked militants to kill US' troops in Afghanistan is at this point both a stunning accusation and an irresponsible charge", he suggests.

The newspaper's editorial policy is fraught with risks, however, as it is "irresponsibly undermining US foreign policy for the purpose of hurting Trump in an election year", Vatz opines.

'The Entire Story is Bogus'

"First it was Taliban getting paid and Trump getting briefed personally in March, then after the ODNI and the White House denied it the goalposts shifted to 'Taliban-linked' criminals and a written briefing in February", he underscores. "The NYT also threw in alleged electronic transfers, Islamic banking and cash as 'evidence' - even though that's not how any of that works - in an attempt to keep the conspiracy going".

What apparently dropped off the mainstream media's radar is that the Daily Beast's assumption of alleged Russo-Taliban collaboration having been going on since 2014 de facto implicates Obama and the US intelligence community, according to the journalist.

"Given everything I've read about the 'Russia bounties,' my assessment is that the entire story is bogus, conjured as a political hit job against Trump but also against the idea of ending the war in Afghanistan, from which some factions of the US establishment are obviously profiting even as soldiers keep dying", Malic offers.