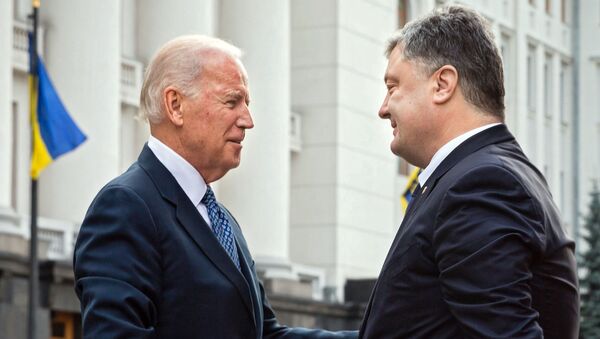 Ekaterina Blinova
All materialsWrite to the author
The release of the alleged Biden-Poroshenko conversations has not caused much furore in the US mainstream press, being largely dismissed as much ado about nothing. However, Wall Street analyst Charles Ortel is sure that if authenticated, the leaked tapes will deal a heavy blow to Joe Biden's presidential bid and political future.

On 19 May, leaked tapes allegedly featuring ex-Vice President Joe Biden discussing the ouster of the Ukrainian prosecutor general with the country's former president Petro Poroshenko were released by Ukrainian parliament member Andriy Derkach. However, the US left-leaning mainstream media have tried to downplay the exposure, insisting that even if the tapes are authentic, they contain nothing incriminating the presumptive Democratic nominee.

The conversations, which have yet to be verified, took place at a time when then-Prosecutor General Viktor Shokin carried out an inquiry into Burisma Holdings, the Ukrainian gas firm where Biden's son Hunter had served on the board of directors until 2019 despite limited expertise.

Joe Biden pressured Poroshenko into sacking Shokin as a condition for providing Ukraine $1 billion in loan guarantees, as he himself acknowledged during a speech at the Council of Foreign Relations (CFR) on 23 January 2018.

​According to Shokin's affidavit, he was removed specifically for looking into Hunter Biden's role in Burisma, while Joe Biden insists that he pushed for the ex-prosecutor general's ouster over corruption concerns. However, in the audio recordings, Poroshenko supposedly said that he had been unaware of any corruption charges against Shokin and had no information about the official "doing something wrong".

"If these recordings are verified, they are devastating for Joe Biden's campaign and for his future", opines Charles Ortel, a Wall Street analyst and investigative journalist. "During the Obama administration, the unlawful practice by politicians of monetising their influence for the benefit of family and their donors widened. But the brazenness of Biden's dealings, as amplified in these recordings likely shocks voters across the political spectrum."

It was quite predictable that the left-leaning mainstream media would do its best "to treat these recordings as a 'nothing burger'", the analyst remarks.

Still, the Wall Street analyst envisions that "even if Biden finds a magic elixir that will sharpen his mind, he will never survive the barrage of ads and negative sentiment already flooding his way".

Meanwhile, the Senate Republicans are continuing to push ahead with their Biden-Burisma probe. On 20 May they issued their first subpoena for Blue Star Strategies, a US public affairs firm that worked with Burisma.

The subpoena seeks records from the firm made between 1 January 2013 and the present "related to work for or on behalf of Burisma Holdings or individuals associated with Burisma", according to The Hill.

"I do not know about traditional GOP interest in digging up ground concerning globalist schemes to enlist pliable politicians to trade money for influence but I sense growing interest among the large swath of independent minded voters to expose 'monkey business as usual' and bring corrupt actors to justice," says Ortel commenting on the Senate Republicans initiative.

According to him, these efforts are justified given that now the Americans "have abundant evidence, possibly buttressed by these tapes", that Joe Biden used his influence over the federal government during his vice presidency "to stop a Ukraine investigation into Burisma and his son Hunter, conspiring with the former leader of Ukraine during and after the 2016 election cycle".

Meanwhile, Ukrainian prosecutors have launched an investigation into the leaked tapes. Though the probe is largely directed against ex-President Poroshenko over alleged treason and abuse of office, it is likely to authenticate the leaked recordings and further shed light on Biden's quid-pro-quo game in Ukraine, the analyst deems.

"The deep state swamp will certainly fight, but the public will fight harder for a long overdue cleaning and reckoning," Ortel foresees. "No American is immune from prosecution forever, particularly for committing crimes, including actual conspiracies, that gut the remaining integrity of the justice system."