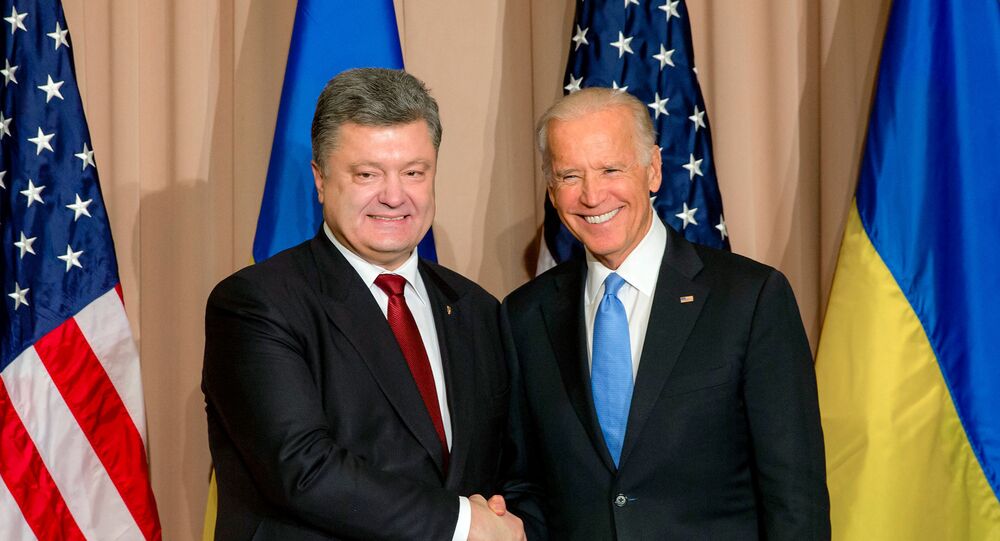 With just five months to go until the presidential election, Joe Biden's campaign has taken a fresh hit after new tapes implied that he had moved Ukrainian officials like chess pieces. The question is whether the story will have the magnitude of Trump's impeachment or get overshadowed like the Tara Reade scandal.

The latest developments in Ukrainegate paint a "shocking" picture of a tight US grip on the previous Ukrainian government, but this probably won't sway the minds of US voters when they go to polls in November, pundits say.

On Tuesday, a Ukrainian lawmaker released the tapes of phone calls between senior Obama administration officials, Joe Biden and John Kerry, and then-Ukrainian President Poroshenko. They appear to show how Joe Biden made US financial assistance to Ukraine contingent on the firing of the country's prosecutor general.

Poroshenko did fire the prosecutor, Viktor Shokin, despite the fact that there were no corruption charges pressed against him nor there was "any information about him doing something wrong," as the Ukrainian president himself purportedly told Biden in a phone call. Moreover, it appeared that Poroshenko was only willing to pick a replacement for Shokin – one of the top roles in the judicial system – if Biden gave his blessing.

Andriy Derkach, the lawmaker who leaked the tapes, accused Poroshenko of spending the $1 billion in aid, which he received after firing Shokin, on defence contracts with companies linked to the then-president or his close associates.

"The conversations of Petro Poroshenko with his US coordinators Joe Biden and John Kerry reveal the role of Washington in Ukrainian politics since the 2014 coup d’etat," says political analyst and columnist Mateusz Piskorsky. "It was quite obvious before, nevertheless, now there’s a chance, that more people – especially in Ukraine – will understand the level of foreign influence in their country."

"What might be quite shocking is the level of interference. Of course, we already knew about US strategic control of Ukraine before. But now it’s also obvious, that even medium-level personal decisions have been taken under the influence of Biden and Kerry. On the other hand, it’s quite strange that the vice president of a superpower paid so much attention to the prosecutor general of a country on the periphery. But this is already the question of Biden’s family private business in Ukraine."

Joe Biden has brought up Shokin's ouster in the past. He explained it by Shokin's perceived failure or unwillingness to act against corruption in Ukraine, although Donald Trump and his supporters have claimed that Biden pressed for the firing because Shokin was investigating Burisma, the private energy company where his son Hunter Biden was a paid member of the board.

Trump even asked Poroshenko's successor Zelensky to investigate the theory, and that request fuelled a rare impeachment process which was stymied in the Republican-controlled Senate in February.

Too divided to keep a cool head

In the meantime, Piskorsky explains that the "American society is so deeply divided along party lines, that the news won’t have crucial significance for Biden’s electoral prospects."

"For the supporters of a Democratic candidate, it’s all about provocation by Trump and his people," he says.

Conservative news outlets have been running Biden-Poroshenko stories, but the mainstream media have largely downplayed it. The Washington Post, for instance, called it a "gigantic nothingburger", and Newsweek repeated Poroshenko's claims that the tapes were made public as part of a Russian "special operation".

"Vice-President Biden explains his interference in Ukraine's politics as supposedly preserving democracy and therefore the liberal media has bought into this weak rationale," laments Dr. Zalmay Gulzad, professor of social sciences at Harold Washington College in Chicago. "The majority of the media is very anti-Trump and therefore more lenient towards Biden. Unfortunately, the choice that America has is between these two."

Professor Stephen B. Presser from Northwestern University School of Law suggests that the tapes are likely to have "little effect" on Biden, as did the Tara Reade scandal.

"It is much more likely that Mr. Biden's diminishing mental abilities will hurt him more, but American politics, as you know are very unpredictable," Prof Presser adds. "Often Americans pay attention to ethnic characteristics, and Biden's Catholicism, and the race of his vice presidential running mate (assuming he designates a black woman) may actually be more important than Ukraine or Tara Reade."

Writer and media commentator E. Michael Jones believes that the new revelations are "not going to help Biden's chances for election in the fall, which were slim at best and only based on media bias against Donald Trump."

At the same time, he says, "it also underscores the massive amount of corruption in the Deep State. The legitimacy of the American form of government rests on the belief that government agencies like the Federal Bureau of Investigation are above partisan politics and can, therefore, be trusted as an impartial investigative body. Adding Bidengate to Russiagate will destroy this fiction forever."

Although the tapes, released on May 19, have yet to make a splash in the United States, the Ukrainian Prosecutor General's office on Wednesday followed up with an investigation into possible treason and abuse of power by Poroshenko.

The former president insists that the recordings were fabricated and that the Kremlin had played a role in the leak. The Biden campaign did not question their authenticity but maintained that they were "heavily edited".