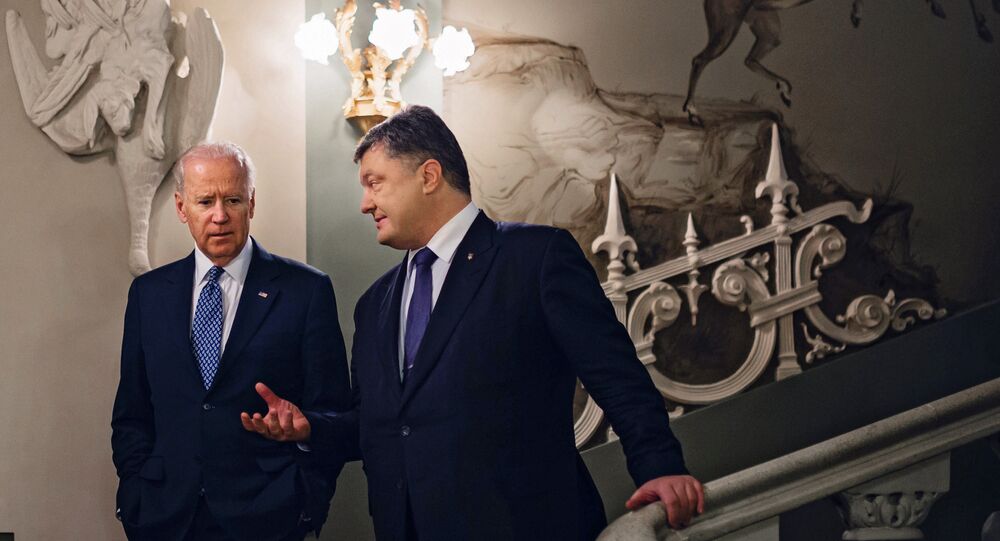 President Donald Trump and former Vice President Joe Biden were caught in the center of a major political scandal regarding the Biden family’s alleged corruption in Ukraine following the 2014 coup, as well as Trump’s alleged illegal efforts to have Biden investigated. Trump was acquitted of any wrongdoing following an impeachment trial in February.

In a press event in Kiev on Tuesday which was aired by Ukrainian television, Derkach said Biden and Kerry put pressure on Poroshenko to dismiss Viktor Shokin, the prosecutor general investigating the Biden family over the possible nepotism and corruption shown with the appointment of Hunter Biden to the board of directors of Burisma, an energy company operating in Ukraine, in 2014, shortly after the installation of a pro-Western government in Kiev in February of that year.

One of the conversations was said to have been recorded on December 3, 2015, three months before Shokin’s dismissal. In it, a voice purportedly belonging to John Kerry can be heard telling Poroshenko “I just wanted to try to urge you to see if there’s a way to get by this problem of replacing the prosecutor general, you know, Shokin because per my perception, he’s blocked the cleanup of the Prosecutor General’s Office, and I know the vice president is very concerned about it.”

A second audio recording dated March 22, a week before Shokin’s March 29, 2016 dismissal, allegedly features Biden telling Poroshenko that the US would provide Kiev with $1 billion in loan guarantees if Shokin was sacked.

“[If] there is a new government and a new attorney general, I am prepared to do a public signing of the commitment for the billion dollars,” a voice purported to be Biden’s says.

A voice purported to be Poroshenko’s replies, proposing the candidacy of his ally, senior lawmaker Yuri Lutsenko for the post. “If you think that a politically motivated figure would be not very good from your point of view, I’ll recall this proposal. Because nobody knows that I’m gonna propose Lutsenko,” the voice says.

In a third conversation, dated May 13, 2016, a voice purported to be Biden's tells Poroshenko "I'm a man of my word. And now that the new prosecutor general is in place, we're ready to move forward to signing that billion dollar loan guarantee."

Shokin asked Ukraine’s State Investigative Bureau to open a criminal proceeding against Biden in late January of this year, accusing him of putting illegal pressure on the Ukrainian government to have him fired.

The former prosecutor found himself at the center of Ukrainegate, the political scandal which began to rock Washington in late 2019, when House Democrats tried to impeach President Donald Trump over a conversation he had with President Volodymyr Zelensky in July of that year.

Democrats accused Trump of threatening to withhold hundreds of millions of dollars' worth of US military aid to Ukraine if an investigation into the Bidens and their dealings in the country aimed at getting dirt on his possible 2020 rival was not restarted. Trump denied that any illegal quid pro quo activity had taken place, and he was exonerated by the Republican-controlled Senate following an impeachment trial on February 5.

Trump and his surrogates accuse Hunter Biden of accepting his cushy no-show $50,000 month job at Burisma to sell access to the Obama White House, and claim Shokin was fired over his investigation of such corruption. Former Vice President Biden has denied these claims, but has admitted that he threatened to withhold a $1 billion loan to Ukraine if Kiev didn't fire Shokin.

US Senate to Push for More Military Assistance for Ukraine - Senator