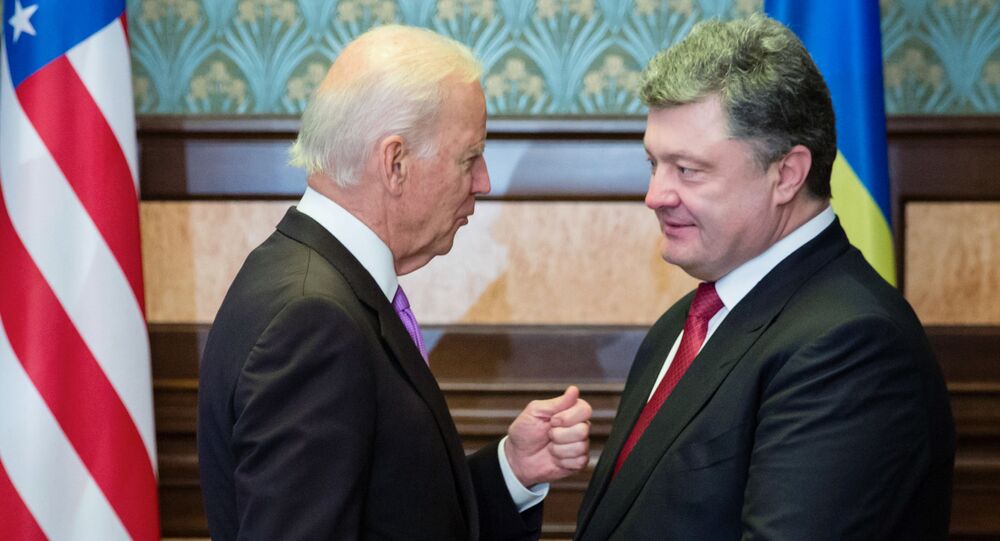 The newspaper Ukrainskaya Pravda has cited an unnamed source as saying that the country’s National Bureau of Investigation initiated a case against the alleged wiretapping of a conversation between Ukraine’s former President Petro Poroshenko and ex-US Vice President Joe Biden.

The Ukrainian news outlet also published an extract from the country’s Unified Register of Pre-trial Investigations, according to which the illegal use of special technical means to obtain information could "damage national interests". Neither US nor Ukrainian officials have commented on the matter yet.

According to Derkach, the conversations, in particular, pertained to Biden’s and Kerry’s effort to put pressure on Poroshenko to dismiss then-Ukrainian Prosecutor General Viktor Shokin, who had investigated the Biden family over possible nepotism and corruption in Ukraine.

The case was related to the appointment of Biden’s son Hunter to the board of directors of Burisma, an energy company operating in Ukraine in 2014, shortly after the installation of a pro-Western government in Kiev in February of that year.

Shokin, who was dismissed in 2016, asked the National Bureau of Investigation to open criminal proceeedings against Biden in late January 2020, accusing the former US vice president of putting illegal pressure on the Ukrainian government to have him fired.

Shokin-related developments went further in late 2019, when US House Democrats tried to impeach President Donald Trump over a conversation he had with Ukrainian President Volodymyr Zelensky in July of that year.

POTUS was accused of threatening to withhold hundreds of millions of dollars' worth of US military aid to Ukraine if a probe into the Bidens’ alleged corrupted activities in the country was not restarted. Trump denied the accusations, and he was exonerated by the Republican-controlled Senate following impeachment proceedings on 5 February.

As for the Biden- and Poroshenko-related recordings, they focused on a spate of Ukraine-related issues regarding the resignation of then-Prime Minister Arseniy Yatsenyuk and the parliamentary approval of Vladimir Groysman’s government.

In one of the conversations, Poroshenko allegedly admitted that there was no coalition in the Rada, the Ukrainian government, according to Derkach.

The lawmaker reportedly claimed that he obtained the recordings from journalists and that he transferred them to the Ukrainian Attorney General's office to initiate a criminal case. Poroshenko, in turn, described the recordings as fake, adding that "the SBU [the Security Service of Ukraine] should investigate who did it".