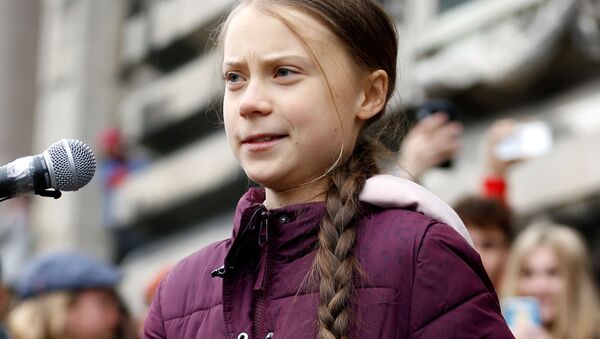 Oleg Burunov
All materialsWrite to the author
Last month, US President Donald Trump questioned Time's choice of Person of the Year 2019, slamming their decision to grant this title to Swedish teenage ecoactivist Greta Thunberg as 'ridiculous'.

Speaking to the Wall Street Journal on the sidelines of the World Economic Forum (WEF) in Davos on Tuesday, US President Donald Trump stated he is not in the know about Swedish climate activist Greta Thunberg.

“I don’t really know anything about her,” Trump said before calling Thunberg “very angry”.

The remarks came after the 17-year-old told the WEF that business and political leaders should do more to combat climate change, urging them to perceive it as a “real crisis”.

“We need to start listening to the science, and treat this crisis with the importance it deserves,” she underscored.

This was followed by Trump’s special address at the WEF, in which he took an apparent swipe at Thunberg and her supporters, saying “This is not a time for pessimism. This is a time for optimism”.

To “embrace the possibilities of tomorrow, we must reject the perennial prophets of doom and their predictions of the apocalypse”, he added.

Netizens have meanwhile remained at odds over the latest Thunberg-Trump showdown, with some giving kudos to the Swedish climate guru and berating POTUS.

She has more brains than the whole a Trump family combined.

I hope Greta calls him "very stupid, very evil and very drunk!", but she's way more classy than all of the TRUMP CRIME FAMILY put together! pic.twitter.com/TUlFrOSpAm

Why is the President of the United States afraid of a 16 year old girl? He's weak, scared, and can't compete with people who have ethics, forward vision, and want to do the right thing. Trump's a fraud. #ConvictAndRemoveTrumpNow

#GretaThunberg has every right to be ‘very angry’ with Trump’s Luddite views on the #ClimateCrisis unfolding before our eyes.

trump confuses anger with passion, but we should all be angry about his constant climate change denials.

He is so out of his element. His ignorance shines even brighter when surrounded by a high caliber crowd.

She’s a hero, Trump is #ImpeachedForever

“He is so out of his element. His ignorance shines even brighter when surrounded by a high calibre crowd,” one user asserted.

Others, however, berated the truant activist Thunberg, insisting that she should have been at school rather than a WEF gathering.

Shouldn’t she be in school.

How can she not be in school?

The comments followed Thunberg’s interview with the BBC in late December during which she said that she "wouldn't have wasted [her] time" talking to Trump about the climate crisis at the UN event.

“Honestly, I don't think I would have said anything because obviously he's not listening to scientists and experts, so why would he listen to me,” Thunberg said.

The remarks were preceded by a Trump tweet in late December,  in which he questioned Time's choice of Person of the Year 2019, slamming their decision to grant this title to Thunberg as 'ridiculous'.

In September, POTUS referred to the 17-year-old as “a very happy young girl looking forward to a bright and wonderful future”, in a seemingly sarcastic remark that prompted Thunberg to use it as her temporary status on her Twitter page at the time.

Earlier, she made splashes at a UN General Assembly gathering, where she delivered a key speech, accusing world leaders of “having stolen her dreams and her childhood”.

“People are suffering. People are dying. Entire ecosystems are collapsing. We are in the beginning of a mass extinction. And all you can talk about is money and fairy tales of eternal economic growth. How dare you!”, she said.

She then launched the Fridays for Future movement, which calls on students across the world to skip school so as to attend demonstrations for climate protection.

000000
Popular comments
“We need to start listening to the science, and treat this crisis with the importance it deserves,” Apparently Greta picks and chooses which science suits her agenda. Scientists are not united on this issue. She never once offered an opinion on how to fix it, what solutions does she suggest since she is such an expert on the matter. And when was the last time she put her wellies on to go out and clean beaches and dump sites or did anything constructive about the environment?