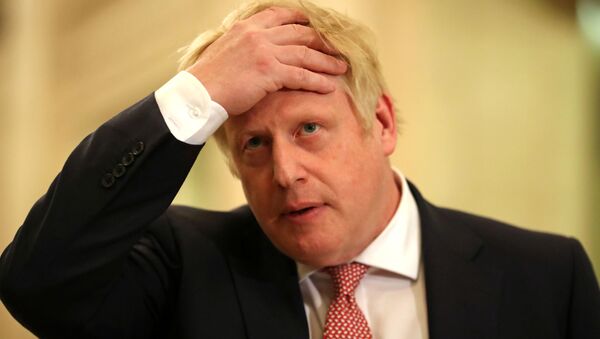 Demond Cureton
All materialsWrite to the author
The British prime minister's call for a new deal on Iran underscores numerous factors tying London's foreign policy to Washington's, threatening the UK's independence following the 2016 referendum and placing it at the mercy of a new foreign power further abroad.

Comments from UK Prime Minister Boris Johnson to adopt a "Trump Deal" to replace the 2015 Joint Comprehensive Plan of Action, or "Iran Deal", effectively revealed a dependence on US security and defence as experts claim the new deal is "a mess" bordering on a "tragedy".

The British Prime Minister urged US president Donald Trump to forge a new pact to keep Iran from obtaining a nuclear weapon on Tuesday, with the latter tweeting in agreement.

But Iranian foreign minister, Mohammad Javad Zarif, rejected Boris Johnson's proposal of a "Trump deal", stating that the US had broken its own agreements and adding that further measures would be taken to reverse the deal in place.

Brexit Talks with Brussels May Fall Through, But Who's There to Catch the UK?

Mr Johnson's comments highlight a resurgence in the US-UK 'special relationship', which peaked in 1946 under former PM Winston Churchill during World War II and continued with Bush-Blair military adventurism in Iraq and Afghanistan.

Boris Johnson's support for a Trump deal continues this tradition via a common objective - a major trade deal with the US, which remains a key component of London's post-Brexit economic strategy.

President Trump had congratulated Johnson on his December general election success, stating that the US would be "free to strike a massive new Trade Deal after BREXIT", directly competing with UK-EU trade talks across the Channel.

European Commission president Ursula von der Leyen hinted in early January that a deal before the Brexit deadline of December 2020 deadline would be 'impossible', echoed by Johnson's comments in a BBC interview that such a deal would be "epically likely" not to happen.

Such economic constraints could see the UK leaving the EU on World Trade Organisation terms, meaning that tariffs and massive bureaucracy could plague the UK economy at the start of January 2021. This may entice UK officials to deepen ties to the US as a backup plan amid failed talks with the EU, for short-term gain, but will turn the UK into a dependency of the US.

The UK-US Special Relationship, in Dollars and Pence

A June 2019 report from multinational professional services firm Ernst and Young (EY) found that such a trade deal would be a "key determinant of the UK’s success post-Brexit".

According to figures from the report, the US was the UK's largest single nation export market, with 13 percent of goods and 24 percent of services, or £84bn, going to Washington.

EY added: [Our] UK Attractiveness Survey found that businesses see a trade deal with the US as the top priority, with 73% of respondents identifying the US as one of the countries that the UK should prioritise in trade negotiations. EY’s 2019 UK Attractiveness Survey demonstrated a greater resilience of US investors, compared to investors from other regions, to the current political and economic uncertainties in the UK.

But while choosing an independent post-Brexit path to diversify investment would seem to be a more sustainable long-term strategy, London appears to have fallen back on the familiar path of allowing the US to dictate its economic, political and foreign policy for short-term benefit, with regional allies facilitating this.

A UK government report also explained that the UK has been losing natural gas production capacity while increasing its demand and imports of liquid natural gas (LNG), further complicating issues for energy suppliers.

Boris Johnson's pivot to Washington could potentially satisfy two preconditions for a major trade deal with the US: allowing the United States to sell its expensive LNG to the UK and deterring Iranian oil firms from selling its own reserves, potentially the largest in the world via the South Pars 11 fields.

But the US is still the biggest winner in this by racketeering the UK's energy security and controlling who London can trade with, namely those already in the US geopolitical orbit along the North Sea, in addition to the UK being pressured from receiving future reserves shared amongst the EU27 set to earn new inflows from the nearly complete Nord Stream II pipeline.

According to figures, UK natural gas production dropped by 3.3 percent in 2018, the first such annual decrease in four years in addition to a "long-term pattern" of decline with production just two-thirds below peak levels in 2000.

Net imports also jumped 11 percent in 2018 compared to 2017 as exports slumped by a third, the lowest since 1999, forcing the UK to rely further on natural gas imports.

Further problems arose after imports from Norway fell by 5.1 percent in 2018, the report said, adding that gas demand had increased 0.9 percent and consumption jumped a further 3.8 percent compared to 2017.

Despite holding five of six domestic oil refineries in England, the UK would have to diversify its oil resources if Scotland pushed through with a second independence referendum and won.

Norway is the UK's largest LNG provider, at 40 percent in 2018, followed by the Netherlands at two percent and Belgium. Conversely, Russian LNG from Yamal only accounts for 0.4 of the UK's total gas demand, according to sources cited by Carbon Brief.

Failing to increase its LNG capacity and continued insecure energy supplies may pressure the UK towards a more bellicose strategy to pressure Tehran into opening its markets using a new form of 'gunboat diplomacy' alongside the EU, rather than working on a cooperative multilateral framework. Three key energy providers - Norway, Netherlands and the US - have also joined forces in recent years to counter global opponents, namely Russia and China, to boost 'European security'.

Adopting a White House posturing on Iran in London could potentially distance the UK from key negotiations, not just in the Iran deal framework, but future Brexit talks, with the UK's European neighbours - many of whom also need to preserve the JCPoA for regional and energy security, in addition to tackling Daesh* militants still present in Syria and Iraq.

Iran Deal A 'Mess', On Verge of 'Sinking' Under Current Measures - Experts

Jo Jakobsen, Political science and international relations professor at the Norwegian University of Science and Technology, slammed the Iran issue as a "mess" with the UK positioning itself further within "Washington's camp".

He explained that the EU faces increased pressure after Trump's withdrawal from the Iran deal in 2018, leaving Tehran to feel that there was "nothing in it for them", as Brussels was forced to "disregard the Iranian view" due to US unilateral and secondary sanctions aimed at punishing European firms.

Concerns on triggering the deal's dispute mechanism was a "significant step towards 'snapback' sanctions", which signalled compliance with America's "maximum pressure" campaign, he added.

The 'Trump deal' would "never come to fruition" as it was less pragmatic in solving the complex issue, he added.

He added: "Iran has little or no incentive to let itself be pressured into another round of negotiations, with the prospects of sanctions relief being scant. Washington’s withdrawal, and the imposition of heavy economic sanctions, is the key factor driving the instability and low-intensity warfare between Iran and the US right now".

EU Lacks ‘Any Credibility’ in Iran Due to Following US’ Lead, Shirking Nuclear Deal Duties
Alexander Gillespie, professor of international law at the University of Waikato in New Zealand, agreed that the 2015 Iran deal was "going to sink".

Two factors would contribute to its failure, namely Iran's removal of "significant restraints" from the agreement and PM Johnson's leadership, which was the "most pro-Trump part" of the EU.

Following America's departure from the agreement, the UK may "finally end up sinking it" once the final steps of the dispute mechanism were implemented, he said.

The British Prime Minister was taking a more pro-US approach because he needed to "get a post-Brexit trade deal ASAP", adding that the measures were "quid pro quo".

Dr Gillespie added that Iran may not comply "if other countries in the region are not held to the same standards", adding that the best solution would be a return to the 2015 Iran deal, "which Iran was in compliance with".

Considerations on Iran's regional influence and missiles were "important", but separate issues, he added.

Conclusions: Diversity Is The Key To Success

Forging a multilateral foreign policy could prove beneficial to London in the long term, and working to preserve the 2015 Iran deal would also ease tensions with Tehran and strategically benefit upcoming trade talks with Brussels, as well as facilitate more constructive relationships with global powers such as China and Russia.

As FM Zarif congratulated Boris Johnson on his ministerial win in July last year, he added that Iran did "not seek confrontation". But the current diplomatic rift over the Trump's targeted assassination of Soleimani's threatens to pull Britain into America's agenda at a very sensitive epoch in its history.

Avoiding a restrictive alliance with the US, namely one that could sabotage three years of cross-channel talks with Brussels, may prove more lucrative by maintaining a more balanced foreign policy approach with current allies as well as building partnerships with untapped global markets, Iran included.