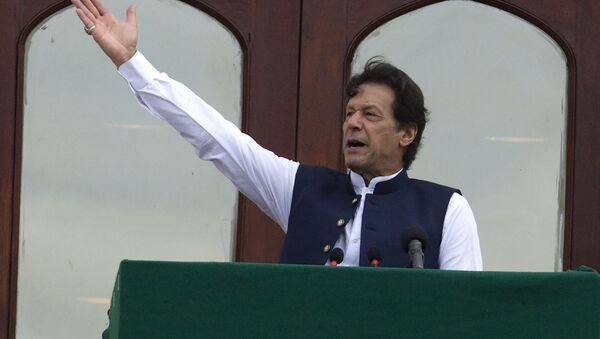 New Delhi (Sputnik): Cricketer-turned-politician Imran Khan has had quite a journey from the age of 18 with his debut in international cricket and leading the Pakistani team to victory in the 1992 Cricket World Cup to getting elected the country’s prime minister.

A video of Imran Khan’s interview with an Indian journalist in 2006 has resurfaced and is making the rounds on social media. In the short clip of the interview, host Prannoy Roy asked him why he didn’t join Bollywood and has he ever been asked to act.

The blushing Khan replied in the affirmative and said, “You won't believe it, I was asked by one great Indian actor who we all used to look up to, who in fact, even turned up in England to ask me to act in a film. But you know I was puzzled".

Soon the audience applauded Khan and curiously asked who the Bollywood actor was. The reluctant Khan then answered the audience, saying it was Dev Anand who offered him a film role.

The video has taken social media by storm and racked up 494,000 views with a number of retweets and comments.

Pakistani Twitter users are tripping on the video as they can’t help but praise Khan for his charisma.