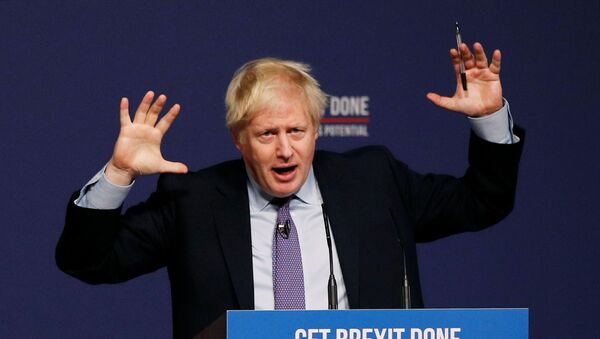 UK Prime Minister and Conservative party leader Boris Johnson presented the Tory manifesto on 24 November ahead of a snap general election in the country, outlining Brexit plans and making pledges on other issues troubling the country.

As Britain is gearing up for a 12 December general election in a showdown over Brexit, UK newspapers have been offering their verdicts on the Conservative Party's newly-launched manifesto, unveiled by Prime Minister Boris Johnson on 24 November in Shropshire.

"The stakes have never been higher" read headlines in the Metro and the Daily Telegraph, as both publications quote a line from Boris Johnson at the launch event.

​​The Telegraph goes on to say the prime minister "made it clear" he would not enter a spending competition with Jeremy Corbyn.

Johnson's plans for spending amount to the “biggest Tory rise in state expenditure, as a proportion of GDP, since Harold Macmillan”, The Daily Telegraph says.

However, the paper adds that Conservative spending pledges are "dwarfed" by those of Labour.

The Guardian agrees the "battle lines" over public spending have been drawn, as the paper slams the manifesto as "modest".

It compares Johnson’s plans to spend an extra £2.9bln a year to the £83bln outlined by Labour.

It also emphasises the blueprint is missing several key pledges from Johnson's leadership campaign, such as promised tax cuts for higher earners.

The paper cites the Institute of Fiscal Studies saying the document was "remarkable" in its lack of ambition.
The Sun decided to go with a festive quote on its front page.

It says Boris Johnson promises a "Happy Blue Year" if he wins the Christmas election and delivers Brexit.

​In sharp contrast to verdicts offered on the manifesto by other papers, The Sun says the document is a "jumbo package of spending promises", which are aimed at ordinary working families.

NHS "at the heart" of election vows

According to The Times and the Daily Express, Boris Johnson has put the NHS "at the heart" of his election campaign, with a pledge of 50,000 more nurses.

The Times hails policies to boost nursing numbers, GP appointments and renovate hospitals as key pledges in the Tory campaign, besides highlighting Johnson's claim that the election is the most critical in modern memory.

The focal point of the manifesto for the Daily Express is also the pledge to add more nurses to the workforce in England by 2023. A Tory government would aim to train more nurses by reintroducing student maintenance grants - which it scrapped in 2017 - of up to £8,000 a year.

The Independent website points out, however, that the prime minister’s pledge has been attacked as "fake" by Labour as including more than 18,000 current nurses the government hopes to persuade to stay in the workforce.

The i describes the manifesto as a "safety-first" election blueprint, a slimmed-down "health and safety" document aimed to dodge big policy pledges which, it says, were detrimental to the last Conservative election campaign in 2017.

The stance of the Financial Times mirrors that of the i.

The FT says this "low-risk" manifesto is a “clever move” by the Tories to retain a "commanding" lead in the polls, with the paper's political editor George Parker saying the pledges are aimed at holding on to voters rather than "trying to win new converts".

The Daily Mirror strikes a sombre note, as it offers a picture of a tombstone with the words: "Here lies the Tory manifesto... and lies and lies", as it signals it has little faith in the Conservative pledges.

UK Prime Minister and Conservative party leader Boris Johnson presented the Tory manifesto on 24 November as a snap election in the country closes in.

In the manifesto, the party outlined not only its plans for taking the country out of the European Union, but also addressed a host of other issues troubling the country.

Tories are planning on passing Boris Johnson’s Brexit deal through Parliament by Christmas, hoping to start implementing it in January 2020 and to wrap it up in December 2020 without further extending the transition period.

Following Brexit, Tories plan to negotiate a free trade deal not only with Brussels, but also with other countries to cover 80 percent of the nation's overall trade.

Delivering for our NHS:

Regarding the country’s social care, the Conservatives are planning to invest some £1 billion, employ an additional 50,000 nurses and negotiate long-term social care reform with other parties.

The pledges regarding taxes come down to planned massive tax cuts worth £23.5 billion (around $30 billion), primarily by raising the threshold for social security contributions.

The Tories also plan to increase the tax credit rate threshold to 13 per cent to boost private-sector research and development.

On defence, the manifesto indicates that conservatives will boost spending annually, keeping it above the designated by the NATO member 2 per cent of the GDP target.

After struggling with previous deadlock in passing his withdrawal document through Parliament, UK Prime Minister Boris Johnson and his Conservative party initiated a snap general election for 12 December as a last-ditch attempt to gain the support required to pass a renegotiated version of the deal.

The Tories have taken a 19-point lead over Labour with less than three weeks to go before voters head to the polls after Boris Johnson unveiled his manifesto.

A current YouGov midweek poll indicates no manifesto bump for Labour, with the Conservatives polling at 42 per cent, Labour at 30 per cent, the Liberal Democrats at 16 per cent, and Brexit Party at 3 per cent.

​According to Opinium, the Tories are at 47 per cent, Labour at 28 per cent, Liberal Democrats at 12 per cent, and Brexit Party at 3 per cent.