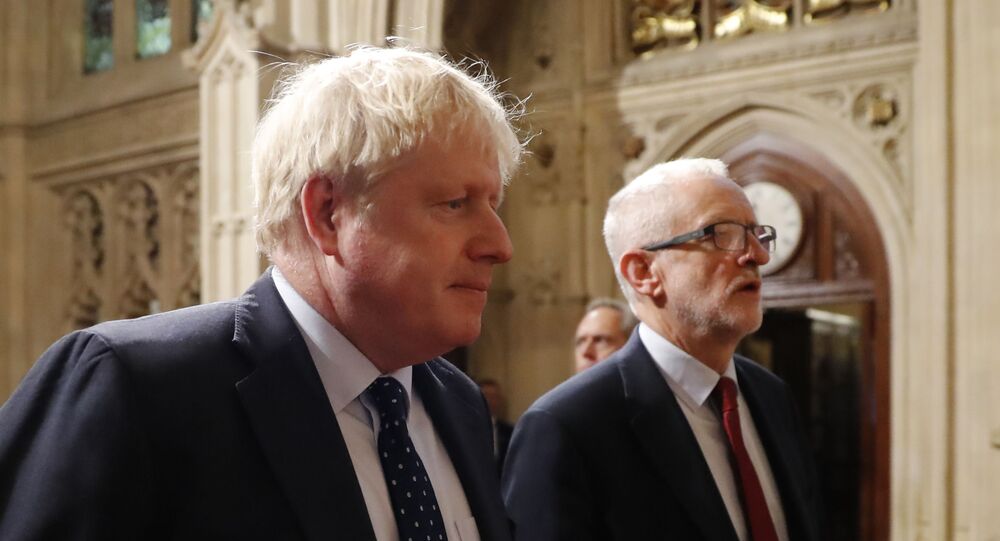 The election frontrunners appear to have had a tough time being quizzed live on Friday over the NHS, Brexit deal dilemma, and a potential referendum, with the latter arguably being the biggest apple of discord.

Boris Johnson has taken aim at Jeremy Corbyn, who told BBC Question Time that he would not campaign for Leave or Remain, but opt to stay neutral, so that it would permit him as prime minister to deliver on what the voters ultimately decide.

Johnson pointed out that the Labour, SNP, and Lib Dem leaders wanted to “basically frustrate” the results of the landmark 2016 referendum and let down citizens by floating an “absurd” idea of a second one.

"He [Corbyn] is now going to be neutral on the deal he proposes to do. I don't see how he can do a deal when he is going to be neutral or indifferent", Johnson said arguing the Labour leader’s views seem to have “mutated” and the goal of negotiating an improved agreement would be completely ruined by his indifference.

Corbyn insisted it was "entirely reasonable" to put the question back to the people as another referendum would allow for a sort of a middle ground between those who changed their mind and wanted to reverse Brexit and those backing the PM's deal.

Asked to clarify his own position, he said: "I will adopt, if I am prime minister at the time, a neutral stance so I can credibly carry out the results of that to bring our communities and countries together rather than continuing an endless debate".

Johnson then asked how Corbyn could be ambivalent on such a crucial issue, but the prime minister was bombarded with questions himself, with his potential electorate wondering he could be trusted in what he has vowed to do.

Grilled on whether politicians should be relied on to tell the truth, Johnson contended it was “absolutely vital", while admitting that what puts public confidence in jeopardy is the “corrosive” effect of Parliament trying to give Brexit a no-go.

It was revealed the other day that the second head-to head verbal sparring between Corbyn and Johnson, initially slated for this Sunday, has been cancelled, due to no confirmation from the prime minister’s team.

The first televised debate between the leaders of Britain’s two major camps took place on Tuesday, with the politicians clashing on the NHS, Brexit deal, deceased Jeffrey Epstein, and the monarchy.

Per a fresh YouGov poll, in the wake of the ITV debates, Johnson and Corbyn are running almost neck-and-neck in the race, with the Tory leader receiving 51 percent of votes, while the Labour leader is trailing about 2 percent behind.

The UK Parliament agreed to hold a snap general election earlier this month with the date set for 12 December, following Johnson’s three failed attempts to set up a much-coveted vote to end the Brexit limbo.