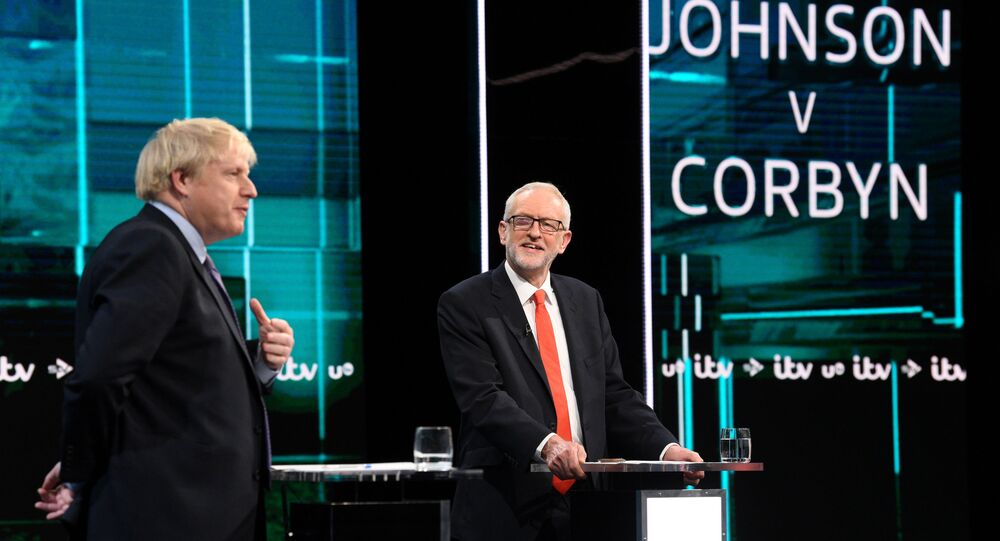 The initially scheduled debate would have been the second televised verbal sparring match between the leaders of Britain's two major parties, set to compete for parliamentary supremacy in mid-December.

A planned Sunday debate between Boris Johnson and Labour chief Jeremy Corbyn has been cancelled at short notice after the prime minister declined the offer to partake.

"Gutted we’ve had to cancel a planned Leaders debate on Channel 4 for this Sunday. Jeremy Corbyn had agreed to take part but, after many weeks of intense discussion, we were unable to secure agreement from Boris Johnson's team", noted Channel 4 producer Louisa Compton.

Anchor Krishnan Guru-Murthy, who would have moderated the debate, potentially the second direct clash between the two, weighed in saying that in actual fact, Johnson “said he was in favour of debates".

"They insisted they were engaged and wanted to take on Jeremy Corbyn on our channel. Corbyn said yes. Offer still stands".

The development closely follows the Labour candidate in Johnson’s constituency of Uxbridge and South Ruislip, remarking that the prime minister was avoiding a local hustings event there for it to be ultimately cancelled:

"Name any time that works for you. My team will organise the venue, details and all logistics. All you have to do is show up. Show an ounce of integrity. Come debate me. What do you have to worry about?" Alim Milani wondered on Twitter, suggesting that his team handle all the preparatory work.

Tuesday saw the first ever head-to-head televised clash between the two leaders of the main competing parties. The first televised debates were aired in 2010 and were a three-way contest, while David Cameron and Theresa May both avoided such off-the-cuff verbal exchanges in 2015 and then in 2017, opting for other formats.

Per fresh YouGov polling results in the wake of the ITV debates, Johnson and Corbyn are running almost neck-and-neck in the contest, with the Tory leader receiving 51 percent of votes, while the Labour leader is trailing about 2 percent behind.

According to the latest ICM opinion poll, however, Johnson has continued to enjoy a significant lead over Corbyn –  that of about ten points. In what appears to be good news for Johnson, with the general election just 2 weeks away, the Tories enjoyed a growing lead in marginal seats, which the prime minister must win if he is eager to secure a majority in the next Parliament.