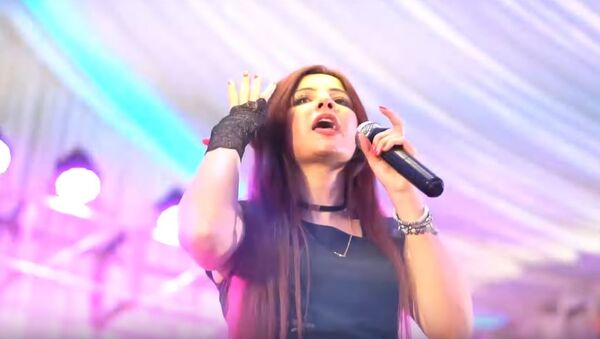 Rabi Pirzada, a Pakistani pop singer and TV host, has announced her decision to quit showbusiness after her nude pictures and videos were leaked online on Friday.

She became one of the top trends in Pakistan for more than 24 hours following the lewd leak, and even though the clips have now been taken down, they remained on public display for over a day.

The pop singer took to Twitter today to announce that she's leaving the entertainment industry while seeking forgiveness from God. She also urged people to keep her in their hearts despite her recording the explicit videos.

“I, Rabi Pirzada am quitting showbiz. May Allah forgive my sins. And soften the hearts of people in my favour,” read her tweet in Urdu.

The nude pictures and videos appeared to be taken by herself in the mirror, and prompted a debate on social media with several people criticising her for filming the videos while others urged the singer to stay strong.

I Request To The Pakistani People That Please Do Not Share The Video & Photos Of Rabi Pirzada With Anyone, She is Also Someone's Daughter & Sister. It Was A Personal Video, Which Shouldn't To Share On Social Media, Yes it Would Be Wrong if She Had Done it For Fame. #RabiPirzada pic.twitter.com/Fra9NEMnuy

We all are humans, it's natural to commit mistakes but Why our nation has gone so down in humiliation, why we don't have sense to support someone..

Yesterday, several people shared their semi-nude pictures on Twitter and Facebook to show solidarity with the singer. The campaign was called as #IamRabiPirzada.

The leak also triggered various theories by social media users, speculating on the reason behind it.

The item song was a project funded by the media wing of the Pakistan Armed Forces but it faced a massive backlash online due to its lyrics.

Seriously disappointing, @OfficialDGISPR we all make mistakes but never refuse to admit it or explain it like this 🙄#chotisibaat pic.twitter.com/2SQHJPtSaz

Rabi Pirzada’s video spread by her ex boyfriend. He had her iCloud password.
Please don’t share this video. We should not spread private things of anyone just for few RTs And Likes.
#RabiPirzada pic.twitter.com/qYv0MUS3zU

A human rights activist and lawyer warned people against sharing her leaked pictures and video as it is a crime to do so. She urged people to not be a silent bystander, saying that they should report the tweets.

Those who are weaponizing nonconsensual intimate images and videos of @Rabipirzada and those who are forwarding them are committing crime under PECA. Don't be a silent bystander, report these tweets and do not forward this violence. https://t.co/S2eVtp3B4l pic.twitter.com/z0hb4friJM

The singer has been targeting Indian Prime Minister Narendra Modi ever since India revoked Jammu and Kashmir's special status in August and decided to bifurcate it into two federally administered territories. Most recently, she took aim at Modi by sharing a picture of herself wearing a suicide vest and threatening to kill him the Indian leader in a suicide attack.