From the Author of ‘Covfefe’: Twitterati LOL as Donald Trump Misspells Name of US Defence Secretary 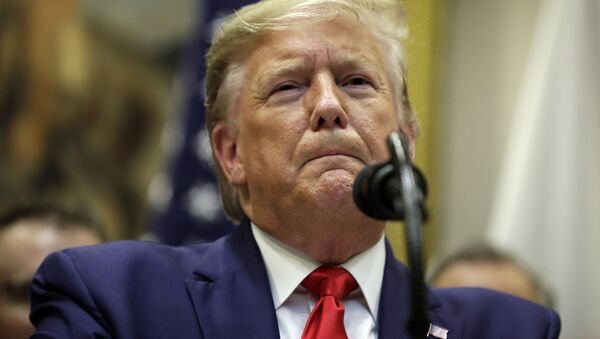 © AP Photo / Evan Vucci
Subscribe
International
India
Africa
The US president is well-known among the public for making peculiar typos and spelling mistakes, with the most recent one being detected when Trump quoted a statement from his own secretary of defence.

Donald Trump set Twitter on fire after quoting US Secretary of Defence Mark Esper regarding the ceasefire in northern Syria that was reached after Turkey launched Operation Peace Spring in the area on 9 October, by referring to the secretary as… "Mark Esperanto".

Although the tweet was later deleted and replaced by a corrected version, Trump’s followers managed to take screenshots of his unfortunate mistake, as his post was apparently left unedited for several hours. 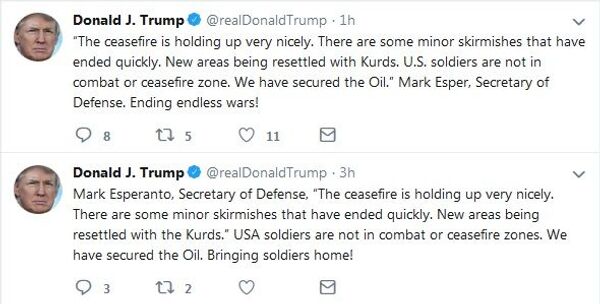 "The ceasefire is holding up very nicely. There are some minor skirmishes that have ended quickly. New areas being resettled with Kurds. U.S. soldiers are not in combat or ceasefire zone. We have secured the Oil.” Mark Esper, Secretary of Defense. Ending endless wars!" Trump wrote in a new tweet.

It took you almost two hours to realize you called your Secretary of State "Mark Esperanto". pic.twitter.com/BMckuUYPHv

We all saw you call him Esperanto

Only took him an hour to figure out who the Sec of Defense is.

This is not the first time that the US president has been caught making hilarious mistakes on Twitter, as he has previously misspelled the name of his own wife Melania, referring to her as “Melanie”.

Trump also caused a Twitterstorm in May 2017 after he came up with the peculiar word “covfefe”, which left netizens wondering for hours what it could possibly have meant. While it was later uncovered that the US president was referring to “negative press coverage” in his tweet, the post went viral, sparking a wave of memes and jokes.

It was recently revealed by the press that the White House staffers who run the US president’s Twitter account often intentionally use poor grammar on Trump’s behalf to resemble his writing style and retain “the common touch”, but apparently do not misspell words or names on purpose.