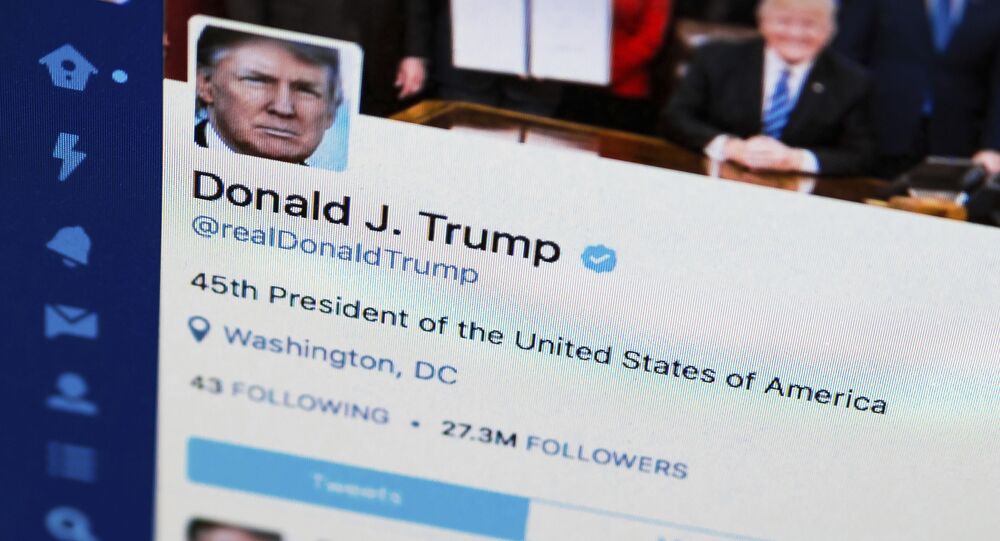 "Some staff members even relish the scoldings Trump gets from elites shocked by the Trumpian language they strive to imitate, believing that debates over presidential typos fortify the belief within his base that he has the common touch," the newspaper notes.

© AFP 2021 / ROBYN BECK
Trump Urges Twitter Followers on to 'Stay Tuned' Amid Trade Negotiations With China
According to The Boston Globe’s sources, tweets written by staffers need to undergo a vetting process before they’re posted.

When a staffer wants Trump to tweet about a certain topic, they write an official memo to the president “that includes three or four sample tweets” so that the latter can select the one he likes best.

Also, one of the interviewees pointed out that while staffers deliberately use poor grammar, they do not intentionally misspell words or names.

"Tweets that are proposed are in his voice. You want to do it in a way that fits his style," one of the sources explained.

READ MORE: Trump's 1st Year In Office In Gaffes: From 'Covfefe' to 'Rocket Man' And Beyond

Donald Trump’s tweets made headlines on a number of occasions, not only because of the issues they were related to or the president’s flamboyant style, but also due to peculiar typos and misspelled words.

On May 19 Trump apparently managed to mistype his own wife’s name, referring to her as “Melanie” instead of “Melania” on Twitter.

And last year the world was baffled by the mysterious “covfefe” tweet, which reportedly turned out to be the result of the president mistyping the word “coverage.”

Trump's Tweet: 'We Can Only Imagine What Could Happen' - Lecturer